I’ve got to be honest, real life got in the way of the Olympics in 1972. I had some important exams & went on holiday for a week. I was away from a TV for a few days. I must have watched the athletics. I don’t think my alternative lifestyle went as far as abandoning sport. I was however away for the defining event of the Games.

Black September, a Palestinian cadre, entered the Olympic village and took Israeli athletes hostage killing two people. Their demands were for the release of Palestinian prisoners in Israel and of the leaders of the German Baader Meinhoff group. Negotiations quickly moved the situation forward and by the evening helicopters were ferrying hostages and kidnappers to an airfield. German authorities never intended to allow the Palestinians to leave the country but the rush to exacerbate the situation had not been conducive to the development of any coherent plan further than killing them. The shoot out went horribly wrong and 17 people died, 11 Israelis, 5 of the Palestinians and a German policeman. The games, suspended for 12 hours, continued.

In the early 1970s radical groups understood the symbolism of gestures which occurred under the scrutiny of the world’s media. Hi-jacks, bombings, robberies and murders became the way these groups publicized their cause. The authorities were slow to react to this threat. There is no greater world wide event than the Olympic Games. The security surrounding the Games is understandable, any incident never mind one as disastrous and as horrible as this massacre is magnified by the intense coverage. Whether the Germans had prior warning of the raid, or were under pressure to resolve the situation as quickly as possible, mistakes were made which caused the death of 11 coaches and athletes.

The women’s athletics were dominated by 3 countries and were disastrous for the USA. USSR, East and West Germany won all the events except one. Heide Rosendahl won 2 golds in the long jump and the relay. She was the local favourite for the pentathlon. It took a new world record to beat her and it was Mary Peters from Northern Ireland who made the record and took the gold. Mary had charmed the Bavarian crowd with her effervescence, her obvious delight in competing before a packed stadium. There were chants of “Mary, Mary” heard as she competed. She charmed our country as well and became Dame Mary Peters within a year. She continued to compete and in retirement became an ambassador for British athletics. This weekend she celebrated the victory of Jessica Ennis, at 73 she looked fit and well and as happy as someone who for two days performed her chosen event better than anyone had ever done. 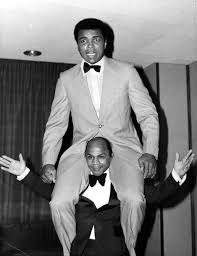 Precious Mckenzie a diminutive (4ft 9ins) weightlifter was omitted from the South African Olympic team of 1960 because he was the wrong colour. In 1964 he was told he could compete but he must be segregated from the white athletes. He refused to go and left South Africa for Britain. Fast tracked to British citizenship he competed in 3 Olympic Games. He did not win a medal but he did win 3 golds for England in Commonwealth Games. He moved to New Zealand in 1974, winning a fourth gold for them. Precious became a personality during his time in Britain turning up to do things like lift Muhammed Ali in his shoulders. I love this photograph. I hope that after the humiliations brought upon him by the disgusting regime in his home country that he found his adopted country to be a welcoming place. In 2006 he was elected to the South African sport Hall of Fame. Too little too late for a whole generation who suffered I think.