Currently on heavy rotation round here is a welcome addition to the record collection. “Rainbow Road: The Warner Bros Recordings” is essentially a 1994 reissue of “Arthur Alexander”, a 1972 LP by that very man, with 3 bonus tracks not included on the original. It’s a great record, under promoted & mostly ignored at the time of release. The title track goes like this…

I’ve written about Arthur Alexander back when I was new to this blog lark. I got diverted by cover versions of his songs & only featured one of his own. I know, you don’t have to tell me, I’m disappointed in myself. He was certainly a fine & influential songwriter but he is also one of my favourite singers with a warm, restrained, soulful delivery. Any success he had as a Country Soul pioneer was in the early 1960’s, before the explosion of interest in Soul music just a couple of years later. His second single “You Better Move On (1961) was the first hit recorded at FAME Studios in Muscle Shoals, Alabama, the windfall financed a move to a new facility on Avalon Avenue where musical history would be created. It was successful enough to get a UK release & there were young British musicians who were listening.

The Rolling Stones recorded their version of “You Better…”in 1963 for a 4 track Extended Play 7”. It stood out as another texture for the group, softer than the Blues & R&B covers that made up the rest of their live set. In 1964 the only track on the Stones debut LP credited to Jagger-Richards, the plaintive Pop ballad “Tell Me (You’re Coming Back)”, had a similar tone to Arthur’s song. Meanwhile, over in Hamburg, the Beatles needed plenty of material to add variety to the up-to six sets a night they had to play & Arthur Alexander’s early singles were plundered by the pre-Fabs. “Anna (Go to Him)” made it on to the “Please Please Me” LP (1963) while there were live versions of “Soldier of Love”, “Where Have You Been” & “Shot of Rhythm & Blues”, songs not written by Alexander but all originally recorded by him. There’s no doubt that John Lennon’s early songwriting, songs like “This Boy” & “You’re Gonna Lose That Girl”, were influenced by Arthur’s mid-tempo style.

Arthur was signed to Dot Records, a label based in Nashville. The signature piano trill on “Anna” is played by the master session man Floyd Cramer. Dot was mainly a Country label & some of the material he recorded there could be a little conservative, standards that lacked the simple flow that made his own songs so attractive. When his contract ended he signed with Monument Records & his releases were sporadic for the rest of the decade. There are stories of a fondness for drink & amphetamines, breakdowns &, in 1971, a third & final commitment to a state mental hospital. Despite this “The Monument Years”, recordings between 1965-72, is a pretty good collection. 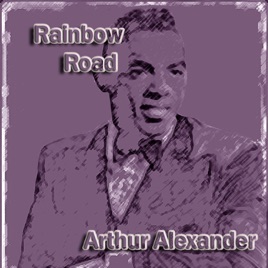 On his release things picked up for Arthur & he signed to Warner Bros. The LP “Arthur Alexander”, his first extended set for 10 years, is produced by Tommy Cogbill, bass player with the Memphis Boys, house band at American Studios. He & his fellow band members, transplanted to Nashville for the sessions are all over the record. Songwriting talents from the 3 centres of Southern music, Nashville, Memphis & Alabama, make contributions to the playlist. On “Rainbow Road”, a wonderful story song co-written by Dan Penn & Donnie Fritts, Alexander’s assured vocal is enhanced by the inimitable guitar of Reggie Young. There are 4 tracks by Country writer Dennis Linde, one of which “Burning Love” was a single just before Elvis took his version into the charts. Steve Cropper off of Booker T & the MG’s has his name on the gentle “Down the Back Roads. My selection is one of Arthur’s own songs, co-written with his now regular partner Thomas Cain. “Mr John” is the kind of down home Americana that Elton John & Bernie Taupin were aiming for on “Tumbleweed Connection”. That LP was awarded a Gold record, this one was a well-kept secret until after the death of the singer. Them’s the breaks in an industry with plenty of similar stories.

Arthur didn’t make any money from those cover versions by his illustrious fans. He made more records but, disillusioned with the business, by 1977 he was happy to be at peace with his demons & his God, driving a bus in Cleveland , Ohio with little inclination to perform. He finally responded to continuing respect for & interest in with a well-received comeback in New York which led to the old gang getting back together for the LP “Lonely Just Like Me” (1992). A fine job was made of some old songs, it was the 4th time he had recorded “In the Middle of it All”, obviously a favourite of his.  Moves were being made to get Arthur a better deal on his catalogue of songs when, in 1993, he collapsed in one of the meetings & died the next morning. “If It’s Really Got To Be This Way”, from that final album, is proof that class is permanent. It’s a poignant piece of homespun wisdom taken at a lovely easy canter, pure Arthur Alexander. This tribute stops here because I seem to have something in my eye.