I was already looking upon “Small Town Crime”, the latest film written & directed by the Nelms Brothers, with a kind eye because it stars John Hawkes, one of my favourite current actors. The choice of “Good Times” by Eric Burdon & the Animals to accompany the opening credits clinched the deal & I settled into the sofa to enjoy a capable, violent, low-life thriller which tips its hat to the Coen Brothers & to Tarantino. Speaking of the Coen Brothers, I do like a good tune at the start of a movie & I do like this.

“The Man In Me” is from “New Morning”, Bob Dylan’s second LP of 1970. The sprawling, deliberately indulgent double album “Self Portrait” was the future Nobel laureate’s way of letting the Woodstock Nation know that if they really wanted a leader to follow then they should be looking in another direction. Bob’s retreat from the public gaze after his motorcycle accident in 1966 added mystery to the legend, leaving the Dylanologists to pore over & think too much about his recorded output. The superbly lyrical “John Wesley Harding” & the Country-croon of “Nashville Skyline” were a break from the early topical Folk songs & from the phosphorescent Rock & Roll of the mid-Sixties. On “New Morning” Dylan was bringing it all back home but Home was a different place now .

“New Morning”, quickly recorded in New York, is a lovely piece of kit. “Day of the Locusts”, about an uncomfortable time at Princeton & “Went to See the Gypsy”, an imagined meeting with Elvis, showed Dylan was still master of the spiky put-down but it’s an album with a predominantly romantic, contented outlook. The title track, “If Not For You” (an instant classic),”Sign on the Window” & others were simple, tender paeans to domestic bliss. “The Man in Me” is in that category &, to some extent, it was “The Big Lebowski” that brought it back to the world’s attention. Over here in the UK we already knew what a great love song it was because in the Summer of 1977 you didn’t go to a club or a blues dance without hearing this great version. Matumbi were a keystone in the UK Reggae scene. A homegrown group who paid the bills backing touring Jamaican artists, their early singles, a cover of Hot Chocolate’s “Brother Louie”, the Rasta-influenced “Wipe Them Out”, didn’t really get a wide hearing. At the time the national charts were based on high street & chain sales, excluding specialist independent shops. “After Tonight” (1976), a self-penned, sweet, harmonious harbinger of Lovers Rock, stayed on the Reggae charts for almost 6 months without bothering the Top of the Pops list. The following year “The Man in Me” was the most successful Reggae 45 in the UK & still never made the Top 40. Matumbi did not get the shot they deserved.

After signing with a bigger label the group released a debut LP “Seven Seals” (1978), which, beautifully produced by guitarist Dennis Bovell, still is some good listening. Reggae was being heard a lot more after Bob Marley but it was newer, younger Black British groups, Aswad, Steel Pulse, who were getting the attention. Bovell was busy with other projects. He became a partner/producer for the Lovers Rock label, writing the sure-fire smash “Silly Games” for Janet Kay,. There were Dub albums released under the pseudonym Blackbeard, his Dub Band provided the imaginative musical foundation for the poems of Linton Kwesi Johnson & he scored Franco Rosso’s sound system drama “Babylon” (1980). Dennis Bovell was a groundbreaker & an inspiration for those who came after him on the British Reggae scene.

When, in 1979 during the sessions for “London Calling”, the Clash made a demo of “The Man in Me”. It was the UK Pop Reggae of Matumbi they were covering not the Dylan original. It seems that Matumbi themselves discovered the song from another group’s version recorded in 1971. 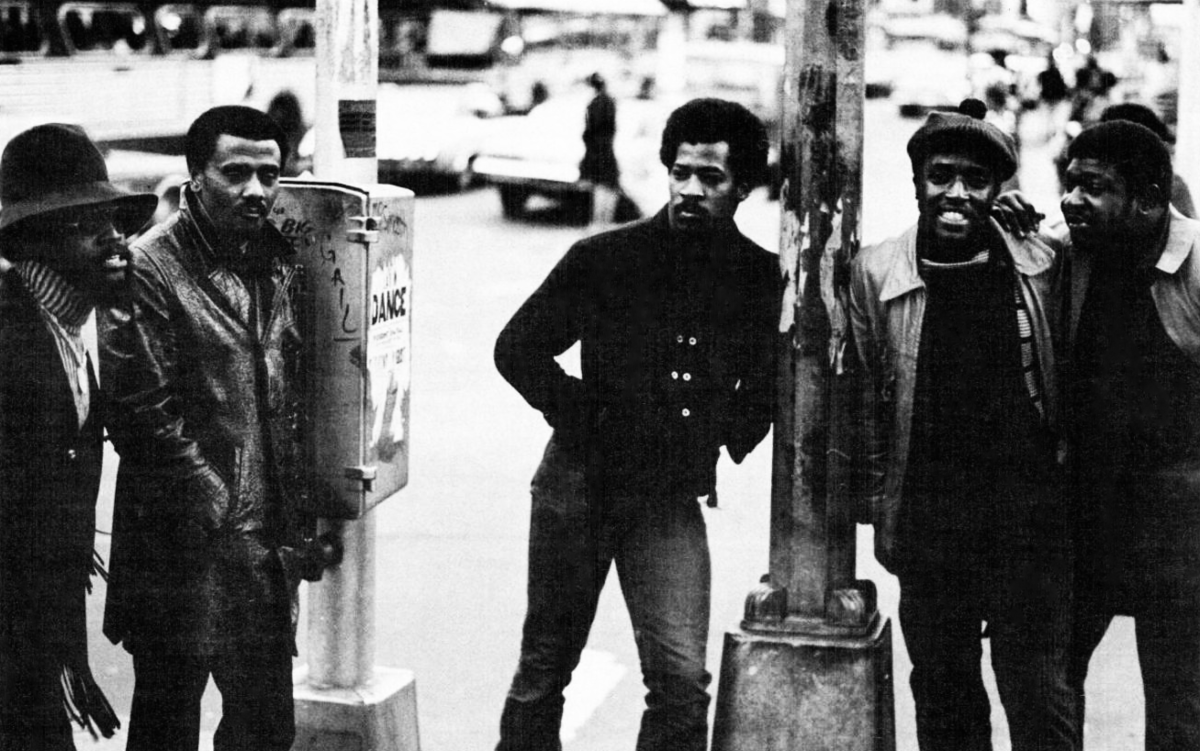 Now here’s a group that you don’t hear enough about. Formed in New York in 1962 the Persuasions were an acapella group who caught the ear of Frank Zappa, a champion of Doo Wop music, who recorded them for his Straight label. Through the 1970’s they continued to make records which were never anachronistic or revivalist because they always sang with Soul & Joy. “The Man in Me” is included on “Street Corner Symphony” (1972) possibly the best of their albums though their just vocals versions of classic songs are all worth checking out.

The Persuasions kept on keeping on. At the end of the 20th century there was a Christmas record then one for kids before in 2000 “Frankly A Capella-The Persuasions Sing Zappa” was not only very entertaining but made a whole lot of sense. This began a series of albums based on the catalogue of a single artist, the Grateful Dead, the Beatles, U2 & Dylan. These are perhaps not as successful as the Zappa one but no-one does what the Persuasions do better than them & Jah bless them for it.

Post-Lebowski “The Man in Me” spawned many more cover versions. I do like the one by Jason Isbell & Amanda Shires (I would, wouldn’t I?), it’s exactly the heartfelt, honest love song that Jason, inspired by his new wife, was hoping to emulate. My favourite thing this week is not only worth featuring here but is also a fine piece of synchronicity. Bobby Vee is from Fargo, North Dakota (hello to the Coen Brothers again) who, in 1959 as a 16 year old, had a hit in Minnesota with his first single “Suzie Baby”. 18 year old Bob Dylan, calling himself Elston Gunn, blagged a short-lived gig as a piano player with Vee, his first professional experience. When Bob went his way, to New York in search of Woody Guthrie, Bobby exchanged his rockabilly pompadour for a haircut your mother would like & became the biggest, 5 Gold records, of the early 1960’s teen idols. The British Invasion put an end to all that & Bobby Vee, despite covering a couple of Beatles songs, & the label cheekily calling the album “…Sings the New Sound From England”, had just one more hit in 1968. Dylan always spoke very fondly of that brief period & performed his own version of “Suzie Baby”, once when Bobby Vee was in the audience. 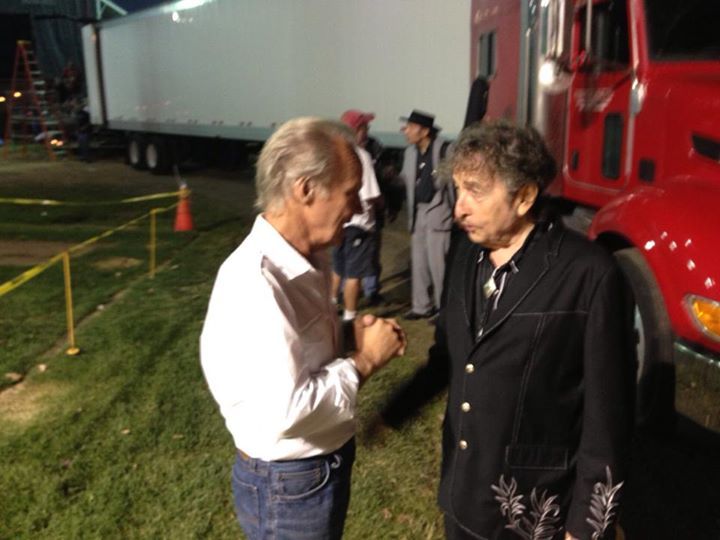 In 2012 Bobby Vee was diagnosed with Alzheimer’s Disease & his 3 sons spent some quality time with their father in the garage studio at his home in Tucson Arizona. The result was “The Adobe Sessions” (2014), a record I’m unfamiliar with but if there’s anything else as good as this take on “The Man in Me” then further investigation is required. There are younger groups making this kind of Folk-Rock who are being hailed as the new incarnation of the Band! It’s an assured, quite moving version & I like it a lot.

So there’s 4 versions of this great song. It may not be “Like A Rolling Stone” or “All Along the Watchtower” but it states a simple truth about Love & that honesty is the best you can ask from a Pop song. “Take a woman like you to get through to the man in me”. That’s right!