By the mid-1960s, however assiduously the mass media tried to swing like a pendulum do, they just did not get it (and they still don’t). OK, the Beatles were bigger than Jesus but did “Magical Mystery Tour” have to be so strange ? The Stones only made the newspapers when one of the members got busted or died. In 1966 the 2 major music programmes on commercial TV were scrapped, A year later offshore radio stations which played records 24/7 were made illegal. As youth culture moved through Mersey Mop Top to Mod to Marijuana it was left to the BBC, with the weekly “Top of the Pops” & the new Radio 1, to supply our musical rations. The Beeb assured us it was very exciting but really it wasn’t. Something was happening but you don’t know…you get me.

In 1968 if you did not make the Radio 1 playlist then you did not get heard. I have a vague memory of the Breakfast Show clown choosing VU’s “Who Loves The Sun” as a Record of the Week but I think I must have dreamed that. A generation of children who received a guitar for Xmas 1963 were ready to make some records by 1968. There were a lot of them & there was not a one who had not been influenced by those Beatles boys. There were few opportunities for them on UK screens but, lucky for us there was a little room for some of Pop’s new wave on French TV.

Blossom Toes made LPs on either side of 1968 but neither sold many. In between times the band covered a Dylan song & released “Postcard”, a hoped-to-be chartbound sound which just wasn’t enough of an ear worm to stand out in a very competitive market. It’s a lovely slice of melodic whimsy, more pop than psych, definitely more McCartney than Lennon. Between their baroque, hashish harmonies & the acid dissonance of the 2nd LP the Toes nailed it with “Postcard”. 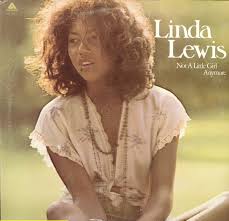 Enough of us remember it but not too many of us bought it & the band broke up. Guitarist Brian Godding had one more try at pop with B.B.Blunder before becoming a noted player of (Jah help us) jazz-fusion. The other one, Jim Cregan played with a who’s who of British rock. Family, Cockney Rebel, Rod Stewart. He also married singer Linda Lewis (left)…lucky, lucky,lucky.

Kaleidoscope are another band remembered as being on the psychedelic side of the street but listening to my favourite of their singles “Jenny Artichoke” I am hearing a good pop song. the band were on it in 1967 with a debut 45 “Flight From Ashiya” (see Nuggets II) causing a ripple. Now I really like these British Love generation reveries, not as abrasive as acid-rock nor as experimental as the folk pixies. from the reaction of my friends I know that I am in a minority but I’m sticking with this, it’s fun. The same line-up morphed into Fairfield Parlour & “progressive rock” making less of an impact than the original band. Here is Kaleidoscope in their Carnaby finery. The clip may be from 1967 & loosehandlebars, as you know, is all about context & the real nitty-gritty.

In 1968 out there was getting further out & there was an audience who had little interest in this magical mystery music. They wanted shiny, happy music like the Beatles used to make. Nothing wrong with that &, of course,  if there is a demand then the market will supply it. In the US there was the rise of “bubblegum”, groups who were cartoons like the Archies or almost cartoons like the Monkees. In the UK there were new teen groups happy to replace those bands now “getting it together in the country”. The Beatles were always able to straddle any divide but it’s a pity that this new breed of pop kids did not quite catch the ear of a bigger audience. A little too much artifice perhaps, good pop records did not always need to over-elaborate & keeping it simple has always been a thing.

Absolutely Beatlesque, Grapefruit signed to the Fab 4’s label Apple & were named after Yoko’s book by John Lennon. The group got plenty of publicity from this connection & seemed set to make a mark. The 1st LP “Around Grapefruit” was pretty much all released on 45, “Yes” is, I remember, a double A-side with “Elevator”. Grapefruit’s mainman was George Alexander (born Alexander Young) who had stayed behind when his family emigrated from the UK to Australia. His younger brother George returned as a member of the brilliant Easybeats while 2 other brothers were in the mega-successful AC/DC. A talented bunch.

If there were a couple of hits they are best described as minor then 1969’s LP “Deep Water” was less distinctive. Before the end of the decade the group, like the previous 2, were done. By 1970 the generation that followed the Beatles had a keyboard player in the band & were making prog-rock. The clips of these bands are in colour too. To finish here is Grapefruit, suited & booted but phasing & flanging with the best of the pop-psych bands with “Dear Delilah”

These 3 films were rated “R” in the USA because of scenes of a sexual nature, violence or offensive language. I do now want to shock or offend anyone so  if you are not of an age to watch this or are offended by such scenes, please check out the rest of my blog which is much more wholesome. Now…on with the filth !

In 1995 Christopher McQuarrie wrote a script that was a hard sell in Hollywood. “The Usual Suspects” is about 5 guys who meet in a police line-up. It is a dialogue heavy, multi-layered story, the plot is set out on Wikipedia if you have an hour to spare. The movie’s budget was $6 million & the box office take in the USA was over $23 million. McQuarrie won the Oscar for Best Original Script so he had a little leverage. It was though 2000 before a “written & directed by” was released. “The Way of The Gun” is another crime film & it starts like this.

Well all right, that’s rated “R” for restricted right there ! The frenetic rockabilly bluster of “Rip This Joint” thrusts the viewer into the world of two not-so-wise guys played by Ryan Phillippe & Benicio del Toro. (” So, you the brains of this outfit, or is he?” asks James Caan in a reprise of his seen-it-all turn in “Bottle Rocket”. “Tell ya the truth, I don’t think it’s a brains kind of operation” replies Benicio). An ill-planned kidnapping of Juliette Lewis, the crazy, beautiful ingenue of choice in the 90s, & away we go.

Any violent movie at this time was inevitably labelled “post-Tarentino” but there is a lot more to “The Way Of The Gun” than dogging the trail of “Reservoir Dogs”. In this pulp fiction there are no heroes, the relationships between all the characters are complex. There are double-crosses, puzzles & the dialogue is as smart as a whip. Oh &, as we saw, Sarah Silverman gets her lights punched out ! The progenitor of this movie is the work of Sam Peckinpah , the hard-boiled “The Getaway” & the Modern West of “Junior Bonner” not just the famed Westerns. I make no claim that the “The Way Of The Gun” is in the class of these classics but from a sound base the violence is proper, there is intelligence & flair on the screen. Christopher McQuarrie… Wha’  Happened ?

So Vincent Gallo, painter, rapper, model, musician, Renaissance Man, does a fair turn in that movie about the dorks who try to rob a jewellery shop & get doughnuts (Palookaville, 1995). From this he gets to write, direct & star in his own film. “Buffalo 66” (1998) is a gem of an independent movie with a simple plot, a fine cast & cinematography by Lance Acord, who now works with Spike Jonze & Sofia Coppola. Billy (Gallo) is released from prison, he will return to his parents (Ben Gazzara & Angelica Huston…enough said) & will take revenge on Scott Norwood the kicker of the Buffalo Bills who missed a game-winning kick in the 1991 Superbowl &, indirectly, caused Billy’s imprisonment. He kidnaps Layla & presents her to his parents as his fiancee. Er…that’s it.

Billy’s violent fantasy of revenge in the strip club is accompanied by “Heart Of The Sunrise” by Yes. It’s by no means my kind of music but the movie is Gallo’s thing. His slacker, self-indulgent, whiny character, unable to recognise or respond to any genuine emotion is a dickhead but respect to Vincent for showing out. The heart of the film is Layla, played by Christina Ricci, the ingenue of choice in the 00’s. Another bruised individual she is just so attractive in this film. Little Wednesday Addams, who knew ? Here she awkwardly performs a self-absorbed tap dance to King Crimson’s “Moonchild”.

I did not see Gallo’s follow-up film “The Brown Bunny” (2003). By this time his narcissism, performance or not, had become tiresome & I did not want to see what he & Chloe Sevighny had going on. I may have been wrong & it is worth a view but “Be careful what you pretend to be because you are what you pretend to be” (Kurt Vonnegut). Come on Vincent too cool is just not cool.  “Buffalo 66” is a fine personal vision of stunted masculinity & a memorable movie.

Christina (Mia Kirshner) dances to “Everybody Knows” by Leonard Cohen from the “I’m Your Man” LP which added orchestration to his caustic, spare lyrics. Cohen’s sardonic & arch commentaries on the modern world and its strange ways are perfect for the tone of “Exotica” They are often very funny. That line in “Closing Time”, “she’s a hundred but she’s wearing something tight” is so perfect. His songs are in so many films now. “Pump Up The Volume” used this same one. There are two in both “Natural Born Killers” & “Watchmen”. “Secretary” has Maggie Whatsit crawling around to his music. These films aspire to a similar accurate & pithy observation as the songs. “Exotica” does the trick & other films will continue to use Cohen’s music but please, not “Hallelujah” again. Here is a full length video to “Everybody Knows” which I find most alluring.