For someone who has released 30 albums & enjoyed over 20 Top 20 R&B hits, 3 at #1, Tyrone Davis is not as celebrated & remembered as well as some of his contemporaries. He came to wider public attention in February 1969 when his first successful single replaced Marvin Gaye’s “I Heard It Through the Grapevine” at the top of the R&B charts. Two weeks later it was succeeded by “Everyday People” by Sly & the Family Stone. You know those two songs & you can see that it took a pretty good record to make it to #1 back then. “Can I Change My Mind” was more than pretty good, it was Soul Dynamite.

By 1968 two of the leading lights of the talented group who had gathered at Chicago’s Okeh Records were looking for greater independence & a management takeover by Epic was proving to be an obstacle. Curtis Mayfield made plans to leave his group the Impressions & establish his own label Curtom. Similarly A&R manager/producer Carl Davis struck out for himself & founded Dakar. One of his first signings was a former valet/chauffeur to Blues man Freddie King whose records as Tyrone the Wonder Boy had not made a mark. In the time he took to change his name Tyrone Davis gave the label their first hit. “Can I Change My Mind”, originally a b-side, moved Chicago Soul forward. The punchy, buoyant horns are still there, the bass of Bernard Reed & guitar of “Mighty” Joe Young adding an intriguing modern funkiness which influenced the way Pop-Soul sounded from now on. In Jamaica, after Alton Ellis had a hit at Studio 1, it became a song that great singers, Delroy Wilson, Gregory Isaacs, Dennis Brown & others, all wanted to record.

Tyrone’s first LP is the one named after the hit single. Half of the songs are taken from the Atlantic Soul catalogue but this is no set of covers  quickly assembled to cash in while the singer is a hot property. Opening with Wilson Pickett’s “She’s Looking Good” followed by a surprising & effective interpretation of “Knock On Wood” Davis’ strong, bluesy voice is encouraged by immaculate production & arrangements by Willie Henderson & Don Myrick. The Chicago session regulars, equally at home with Blues or Soul are on point too. The LP may not have been as expansive or as ambitious as the greatest of the records made by African-American artists at that time but it’s a finely realised collection of songs that belongs on the top shelf alongside them.

Within 18 months Tyrone was back at the top of the R&B charts & crossing over into the Pop Top 10. “If I Could Turn Back the Hands of Time” is a smooth, impeccably crafted hit single while the rest of the LP with that title is a showcase for the singer’s extensive range . On the ballads it’s as if Bobby “Blue” Bland was a Pop singer & that’s a high compliment. This “Soul Train” clip is from December 1972, some time after the song was top of the pops. It’s as good an example of Tyrone in his pomp as there is. By the end of 1970, with the success of other singles taken from this record, Tyrone Davis was a fixture in the US R&B best sellers.

I’m going to be repeating myself here because listening to “I Had It All the Time” (1972) is another fine experience. Willie Henderson still directs, making use of 3 different arrangers. The short stabs of the horns, the swirl of strings, the female backing vocals, the inventive bass & guitar lines, all contributed to an individual & popular sound. Changes in style & taste were reflected back with an innovative Chicago twist for good measure. At the forefront was Tyrone’s rich, assured voice. 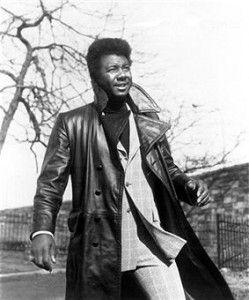 Tyrone Davis was Dakar’s star artist & there was an album from him every year until 1975. When his friend, Leo Graham, who had co-written the b-side of “Turn Back…, became his producer Tyrone returned to #1 in the R&B charts with “Turning Point” in 1976. It is a sign of the changing times that such a successful record made no impression on the Pop charts. Deep Soul music no longer got played on the radio, the days of Disco were upon us. “Turning Point” was his last LP for Dakar & Tyrone signed for Columbia where he continued his partnership with Graham.

It’s maybe another time for Tyrone’s Columbia years. The 7 LPs he made at Dakar are the ones that keep me coming back to him. The Greatest Hits compilations from these years are indeed great. Songs such as “What Goes Up (Must Come Down)” (1974) were made to be played on the radio & to keep Tyrone’s name in the frame. The 2 CD “Ultimate” & the 3 CD “Ladies Choice” reissues include album tracks, lesser known gems, like “Was It Just a Feeling” which push things a little further & are a delight to discover. There’s a roster of outstanding Chicago Soul singers, Jerry Butler, Gene Chandler, Major Lance, Walter Jackson, Billy Stewart, Jackie Wilson.  (I’m not forgetting Etta James, Barbara Acklin, Chaka Khan), it’s a list & it’s not complete (oh blimey…Lou Rawls!). Tyrone Davis continued this fine timeline into the 1970s & if you like those singers then you will love the music he made at that time.