I was surprised that “Jojo Rabbit” made it to our local multiplex, in the school holidays too. OK there was just the one showing a day but movies that are right at the top of my “must see” list often necessitate a minimum 50 mile round trip to a larger cinema with a less narrow view of their audience’s taste. I’m not complaining, there’s some very nice countryside around here & we always take the bucolic way home. Not a fan of the word “multiplex”, I’m aware it’s nostalgic but I preferred the time when every town had a neglected old cinema which could accurately be referred to as a “fleapit”.

Writer/Director Taika Waititi’s successful run has been going on for quite some time now. “Eagle vs Shark” (2007) & “Boy” (2010) caught our attention through his connection with Flight of the Conchords who were not only the funniest thing in New Zealand but also the funniest thing anywhere. “What We Did in the Shadows” (2014) is a brilliant, original documentary on everyday life as a vampire & “Hunt for the Wilderpeople” (2016), an effortlessly charming & funny coming-of-age adventure. Taika got the gig for “Thor: Ragnorok” (2017), huge budget, even bigger box office. I don’t usually do superhero movies but his name on the credits (& my companion’s enthusiasm for that Hemsworth fellow) got me to the cinema. I’m no authority on Marvel Cinematic Universe lore but he didn’t screw up & they are letting him write as well as direct the Viking god & Mjolnir’s next saga.

So “Jojo Rabbit” is a break between the blockbusters, a return to the indie aesthetic only this time Hollywood is putting up bigger bucks. Set in the closing months of World War II, 11 year-old Jojo, helped by his Fuhrer friend Adolf, wants to be the best Nazi around. Events, particularly those at home, test his commitment to Fascism & you will have to ask someone else who has seen the film for the rest of the plot. The humour is broad, exuberant & irreverent, as close to Mel Brooks as I’ve seen since the Master himself. Roman Griffin Davies is adorable as the enthusiastic boy, Scarlett Johansson is his mum,  Thomasin McKenzie continues the good work she started in “Leave No Trace” & Sam Rockwell does his thing that adds value to every film he appears in. At the heart of Taika Waititi’s satire is a warmth & a humanity that is touching & appealing. It’s a good time to be pointing out how wrong-headed Fascism is & ridicule is an appropriate weapon. I loved the movie. Watch the clip & you will laugh out loud, hear the Beatles sing in German & be intrigued enough to want to see “Jojo Rabbit” for yourself.

It was a pleasant to note that in the following week the local picture house had upgraded the film to three performances a day. “Jojo Rabbit” deserves better than straight-to-streaming &  while comedies never win the big awards, this week’s nomination for a Best Picture Oscar will surely bring wider exposure. Next up for Waikiti, before “Thor: Love & Thunder”, there’s an adaptation of “Next Goal Wins” the inspirational documentary about American Samoa’s football team. His update, for something called Apple TV, of Terry Gilliam’s enduring classic “Time Bandits” sounds like a perfect match. I’ll be in the queue for all of them.

I’m not too familiar with the current standing of director Rian Johnson. When George Lucas made “Star Wars” in 1977 I was 24, a grown-up who was not really interested in seeing a children’s film. I know just enough about the series to get the references in “Spaceballs” but y’know, I’m not that bothered. A younger associate tells me that Johnson’s efforts on “Star Wars: Episode VIII – The Last Jedi” (2017) disappointed & enraged millions of fans & that an announced trilogy of spin-off films now seems unlikely to make the screen. Johnson’s films are smart, stylish & entertaining. His debut “Brick” (2005) transposed a Dashiell Hammett Noir to a Southern California high school. “The Brothers Blooom” (2008), a story of international con artists, is a little busy but the mark is Rachel Weisz so you’ll happily stick with it. The time travelling “Looper” (2012) is Hollywood sci-fi, not too high concept, plenty of action, Bruce Willis & very accomplished it is too. 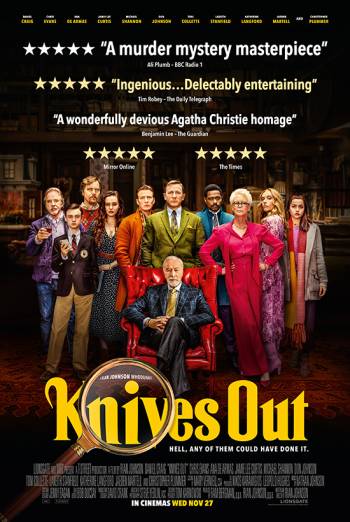 Agatha Christie pretty much perfected the “whodunnit” & while “Knives Out” is an update on the genre there are rules & traditions which Johnson respects & adheres to.  The bereaved family, all with motive enough for murder, are observed by an idiosyncratic detective who we know will finally gather them together & ingeniously expose the guilty party on the final page. The film has the director’s characteristic snappy dialogue & visual flamboyance  & he assuredly keeps the clues & red herrings in the air at the same time. The fine, starry ensemble cast brings to mind those Poirot movies on the Orient Express & the Nile. It’s good to see Ana de Armas being more than just a wife (“War Dogs”) or holographic girlfriend (“Blade Runner 2049”). Daniel Craig’s detective, Benoit Blanc, favours Columbo more than Margaret Rutherford’s Miss Marple or, my favourite, Alistair Sims’ Inspector Poole. “Knives Out” is a very capable, modern entertainment. I’m not sure that Blanc is a strong or interesting enough character to sustain a projected sequel though I am sure that Craig doesn’t need a TV series just yet. 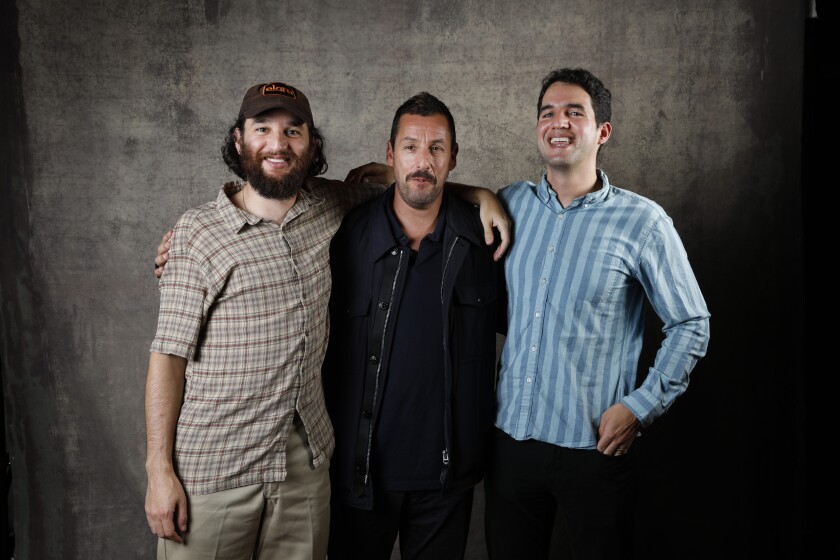 Finally a film starring Adam Sandler a comedian whose continued popularity is beyond me. It’s over 20 years now since “The Wedding Singer” & “The Waterboy” established him as America’s funny guy. There have been parts that have stretched him a little further but there has been plenty of dross like “You Don’t Mess With the Zohan” & “Jack & Jill”, it’s a list, a long one. His role in Paul Thomas Anderson’s “Punch Drunk Love” is cited so often as an example of Sandler’s acting talent that it has become a cliche. Can I refer you to “The Cobbler” (2014) one of those great small-scale movies directed by Tom McCarthy before “Spotlight” made the big time & a Best Picture Oscar. Now, at 53 years old, his performance in “Uncut Gems” is one he will be remembered for. 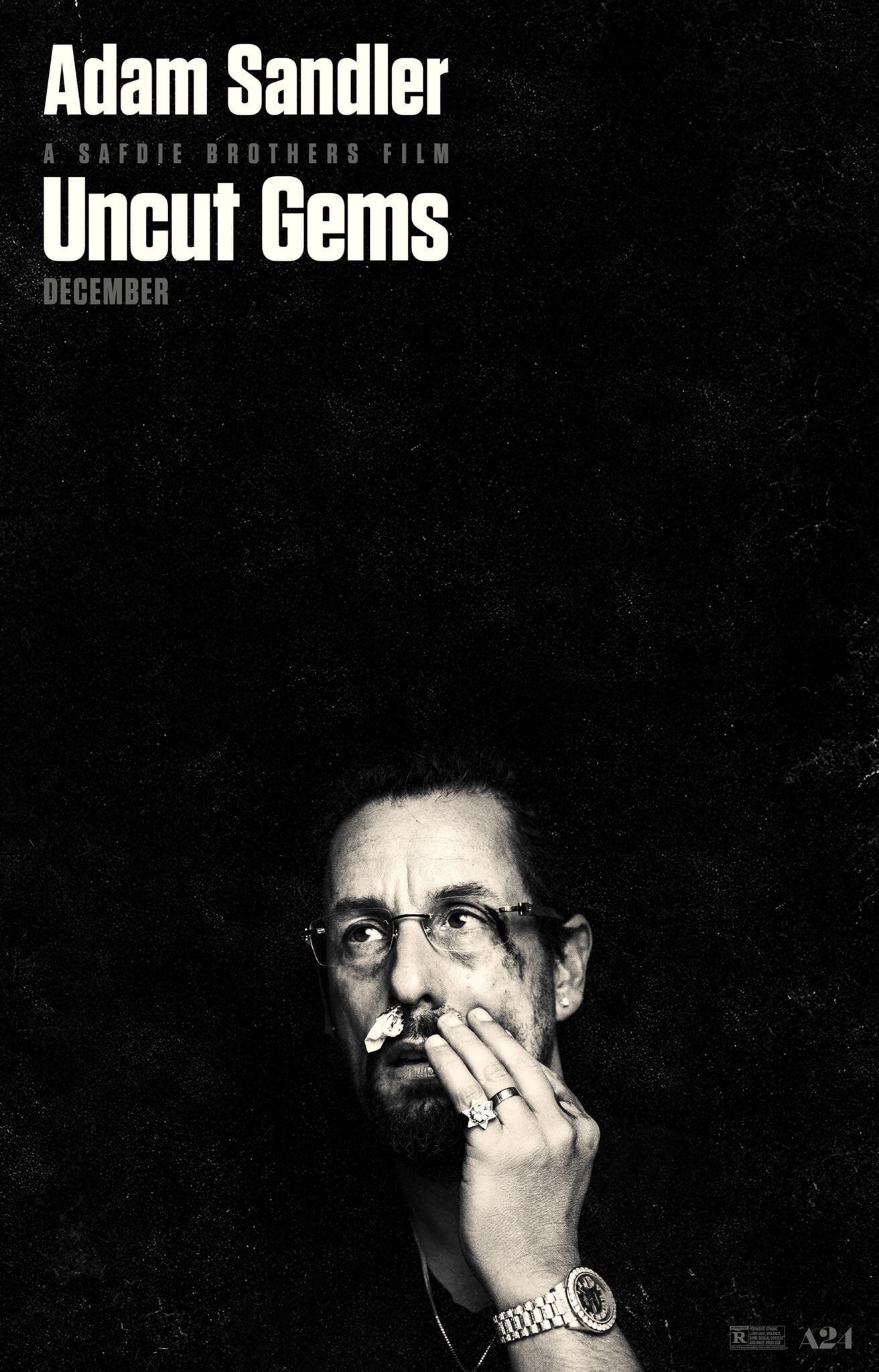 Howard Ratner’s (Sandler) life can’t always have been chaotic. He has a family, a mistress, a jewellery business in Manhattan’s Diamond District, a gambling addiction & things are getting complicated. There’s an Ethiopian opal that he can sell for the kind of money to make his problems go away but this is a Safdie Brothers’ film so things are not that easy. Josh & Benny Safdie make uncompromising, grimy, anxious movies. “Heaven Knows What” (2014) is a love story between two homeless street junkies, “Good Time” (2017), starring the excellent Robert Pattinson, concerns two inept criminal brothers, like “Uncut Gems” neither are the easiest, most relaxing viewing bringing to mind Abel Ferrara’s classic “Bad Lieutenant”. The frantic, exhausting pace is reinforced by fine editing & an outstanding soundtrack by Oneohtrix Point Never. Former NBA MVP Kevin Garnett & Eric Bogosian (now there was a comedian) are among the support but, never off-screen this is Adam Sandler’s show & he steals it.