Two years ago I spent a memorable evening watching the Wilko Johnson Band do that thing that only they do. Wilko & I were friends from back then, the Dr Feelgood days. Seeing those 4 good guys move from pub gigs to Top of the Pops was a very pleasant experience. I went backstage to see Wilko for the first time in a long time. We were both happy to see each other, hugged, spoke of then & now (while my nephew waited to ask about “Game of Thrones”). Just weeks later Wilko was diagnosed with pancreatic cancer. He was told he had 9 or 10 months to live…so it goes. He refused chemotherapy & set off on a farewell tour. I was distressed by the news but pleased that there had been one more good memory of him. The appreciation for his music & the support for his bravery was unanimous. His adoption as a National Treasure ? Well, it should not have been a matter of his mortality, Wilko had been one for a long time.

In March 2014 Wilko released an LP with Roger Daltrey off of the ‘Oo, “the last thing  I ever did” he thought. A surgeon friend, Charlie Chan, surprised that Wilko was still standing, organised extensive tests & in April he underwent radical surgery. Now Wilko is cancer-free, planning a future that he didn’t think he had & still doing that thing that only he does. “Going Back Home”, 10 of Wilko’s songs & a great cover of Dylan’s “Can You Please Crawl Out Your Window”, is an LP that should not have happened but praise Jah that it did. It stands as testament to the indomitability of a fine man and to the good news story of 2014.

“Beauty & Ruin” – Bob Mould. 2014 saw the release of “Workbook 25”, the expanded silver anniversary edition of Bob’s debut solo LP after the break up of Hüsker Dü. I’ve sometimes lost touch with Bob Mould’s music but “Beauty & Ruin”, along with 2012’s “Silver Age”, returns to the power trio, the scything chords that he does better than anyone. This record is like a visit from an old friend. There’s some new news & it’s still told with the passion, the authority which attracted you all those years ago. There is a sense of familiarity but another episode of Bob’s glorious, melodic headlong charge is OK by me. Play Loud ! 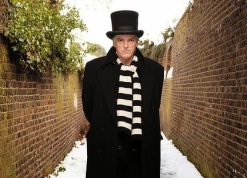 “The Man Upstairs” – Robyn Hitchcock. Way, way back in 1991 Robyn Hitchcock made the best pop record of the year. “So You Think You’re In Love” was from a shiny LP “Perspex Island”, a bid for mainstream attention lacking some of the randomness & individuality which had attracted a devoted following. Since then Hitchcock has followed his own path, combining a dry wit with melodic psychedelia (If Syd Barrett had joined the Beatles…now there’s a thought). His LPs with the Venus 3 are good things.

This year, in collaboration with veteran producer Joe Boyd, he has made his folk LP, a “Judy Collins record”. Half of the songs are covers, including the Doors, Roxy Music & this effective version of the Psychedelic Furs’ “The Ghost In You”. The LP is an atmospheric piece, his best, I think, since 2006’s “Ole Tarantula”. For decades, my Sunday mornings began with a Nick Drake record, a beautiful suffusion to settle the morning after the night before. Currently “The Man Upstairs” is setting up the day of rest just right.