The days fly by & another year is almost done with. It’s time for a hand-picked selection of friends of the blog to look back on their highlights of 2017. First up it’s Steve Pittaway, a long-standing e-acquaintance who attends more gigs in a month that I do in a year. This year Steve & I’s paths crossed briefly but memorably in Real Life (remember that ?). I like it when that happens.

So, the 3 best gigs of the year, that’s not an easy one. 2017 started with the Blue Aeroplanes & was rounded off by current Blockheads saxophonist Gilad Atzmon with many & varied musical experiences in between. It’s almost impossible but here are three of the most memorable ones of the year.

The first that came to mind was The Comet is Coming gig at The Tin Arts in Coventry (City of Culture 2021…fancy !) on the 6th of May. The band came to my attention via a small write up in The Guardian Guide in early 2016. Described as the sons of Sun Ra, a combination of Jazz, Afrobeat & Electronica, I went to the Google to hear just what this mix-up sounded like. Impressed I immediately ordered the “Channel the Spirits” album. Last year, as a support act I saw them play a very lively short set so I was happy to see a headline show announced just down the road from my house.

That night The Tin Arts was packed with people half my age, unusual as most gigs I attend tend to attract an audience of more advanced years. The Comet Is Coming hit the ground running with pulsing keyboards, dance beats & the wondrous sax interspersions of Shabaka Hutchings. As the show progressed you were hypnotically drawn in by the band &, though a confirmed non-dancer, I found myself moving with the rest of the room.
The intensity of the set was only broken by a split snare drum skin but the 90 minutes the band were on stage flew by. If the joy in that room could be bottled it would cure all ills. Like so many bands the album does not do justice to their live performance. It’s one of the reasons I still attend so many live shows, when the band & audience connect it makes for a special evening. The Comet Is Coming…it’s Jazz but not as we know it.
Manchester Orchestra are neither from Manchester nor an orchestra. They’ve been around since 2004 & I was hipped to them by a friend in 2012. He burned me the album “Simple Math”, I was an instant fan & purchased their previous records. There are 5 albums now & the band, from Atlanta Georgia, have built a cult following. If labels are your thing then it’s college/Indie/alternative rock. It’s the lyrical intelligence of singer-songwriter Andy Hull which sets MO apart. 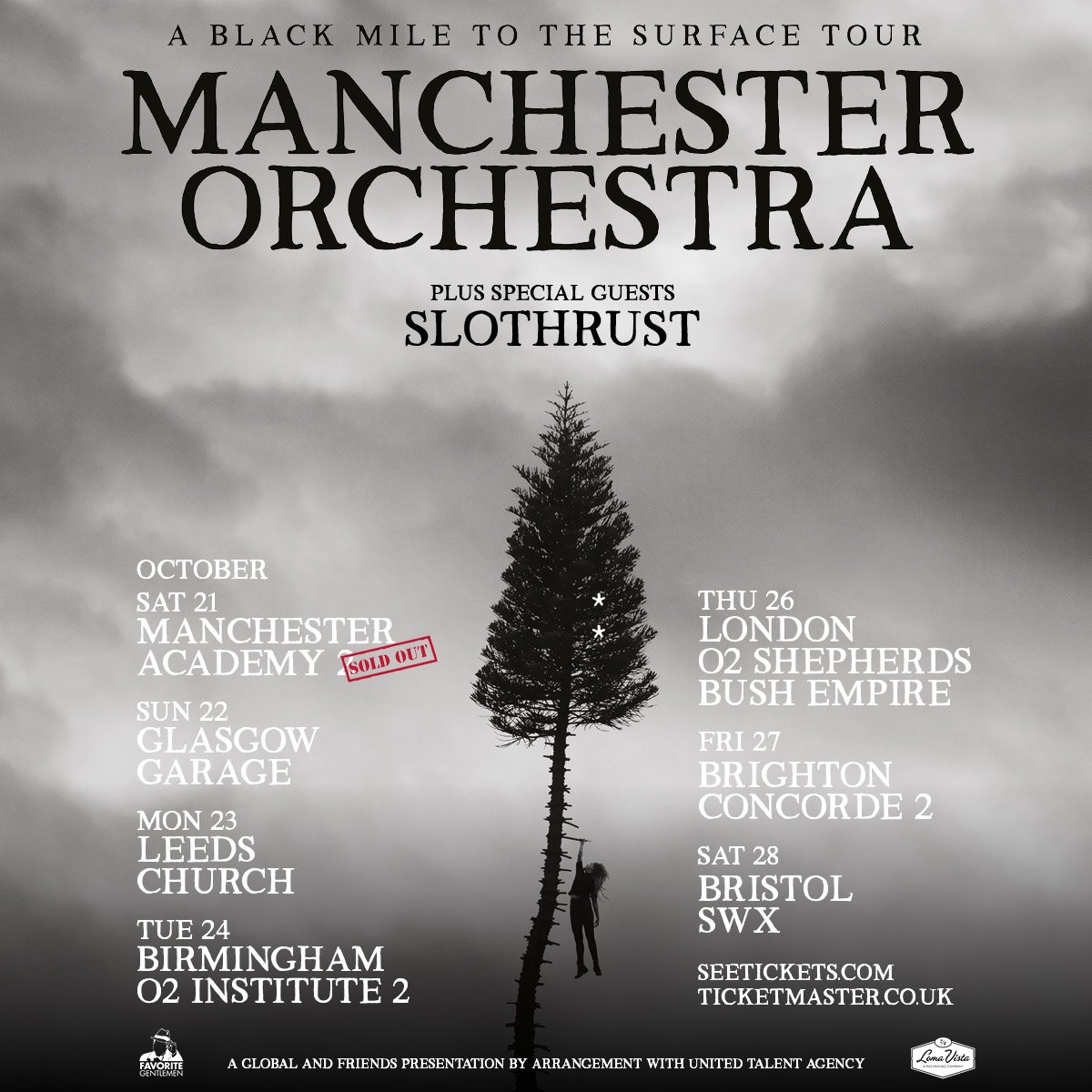 The gig at the 02 Institute in Birmingham on the 24th October would be my third time of seeing the band live. We arrived half way through the support band’s set and found ourselves stuck at the back of the room under a low ceiling, surrounded by people who would rather talk loudly than listen. At the interval my friend suggested we should move forward, which I was more than happy to do.  Before I knew it we were at the front right up against the railing and just a tad too close to the PA for my liking. It has been years since I have been right at the front of a sold out gig. I was frightened for my hearing or what little there is left of it.
The new record, “A Black Mile to the Surface” is more stripped-back & subtle than previous releases but from the opening track “The Maze” we got the more heavily layered sound we know & love. There was plenty of new material with little audience interaction but the intensity built until, at the final crescendo of “The River”, the crowd went nuts. The encore seemed calmer but “The Silence” with its parting “let me open my eyes & be glad that I got here” left me glad that they had & buzzing for days. It may have been such proximity to the PA but I think it was the music.
I’m sceptical about bands that reform with half the original members and generally steer well clear from them. However after hearing that the Ruts or RUTS DC as they are now had reformed a couple of years ago I was intrigued enough to keep an eye on their activities. Back in the late 70’s their album “The Crack” made a big impression but I missed seeing them play. A local gig in May 1980 was cancelled due to singer Malcolm Owen’s increasing drug dependency & sadly in the July of that year Malcolm passed away. The band carried on as Ruts DC for a couple of years before finally calling it a day in 1983.

In 2007 the band reformed for what was to be a one off benefit performance for guitarist Paul Fox who had been diagnosed with terminal lung cancer. Henry Rollins stepped in to fill Malcolm’s shoes and did a fine job. Shortly after the gig Paul passed away. Having been revved up by their performance drummer Dave Ruffy and Bassist John “Segs” Jennings decided that they would create new music together under the banner of Ruts DC. Fast forward a few years and there are two albums,one a very heavily reggae influenced dub album and last year’s return to a more rock orientated release “Music Must Destroy”.
Any scepticism I had is blown away by the first two numbers, the band are not content to live off former glories and just go through the motions. Blasting out quick new song “Vox Teardrop” with the energy of a band half their age and then straight into “S.U.S” the old Ruts number where guitarist Leigh Heggarty proves he is more than up to the job of filling Paul Fox’s shoes. What ensues is a set of old and new songs that are played with enthusiasm and passion. Segs might not be the best vocalist in the world but he delivers the lyrics with zeal and devotion that any deficiencies are forgiven.
Ruffy and Jennings prove throughout the night that they were one of the best rhythm sections from the “punk” era and one of the best exponents of white reggae as proved on the night with great versions of “Jah War” and “Love in Vain”. The night was nicely finished off with a rousing “Staring at the Rude Boys” and a blistering “Psychic Attack”. Sometimes bands do get back together for the right reasons, the joy of making new music and keeping a legacy alive.
Leave a comment