There had been a boycott by some nations in 1976. The USA decided not to attend these Games because of, ironically, Soviet incursion in Afghanistan.  The 70s had seen an effective British boycott of contact with South Africa and the Tory government were in favour of non-attendance. It was left to the athletes to decide and very few of them stayed away.

This is the winner of the pole vault, Wladyslaw Kozakiewicz of Poland. He was competing against the local favourite Volkov and the partisan crowd were not keeping quiet during his jumps. Kozakiewicz had the day of his sporting life and broke the world record. On landing his jump he let the crowd know what he thought of them by giving the crooked elbow salute. “Kozakiewicz’s Gesture” as it became known was also interpreted as a protest by the Eastern European against the Soviet Union and the Russians did protest that his medal should be withheld because of the perceived insult. In a world where soundbites by so many sportsmen and women are so asinine and platitudinous it’s just good to see someone showing their emotions in such an individual way. 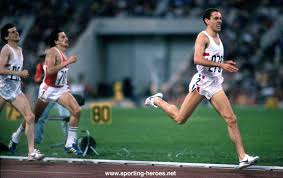 It was a toss up whether I would include the Steve Ovett/Seb Coe rivalry in 1980 or in 1984. There is another British hero across both these Olympics and he will get the next one. The 100m is now regarded as the blue riband event of athletics.  British fans  had grown up with the stories of the first 4 minute mile by Roger Bannister, helped by an outstanding generation of middle distance runners. We saw the “metric mile”, the 1500m as the glamour event.

Britain had 2 outstanding athletes at this distance. They were not just rivals but very different personalities. Ovett was more extrovert. He had won the European Championships easing up and waving to the crowd. He sometimes grew a scruffy beard, a bit of an outsider. Coe had a purple patch a year later in 1979. He set 3 new world records in 41 days. He was a trim, smart polite boy. Even before he entered politics he was the poster boy for the new Thatcherite  Britain. Your mum loved Sebastian and your mates were for Ovett. It really was split like that. However, if Ovett was to succeed at the Olympics then he was gonna have to raise his game.

Steve was favourite for the longer distance, Seb for the 800m. In fact they won a gold medal each but in their less favoured events. This was only the 2nd time they had actually raced each other and they certainly did not appear to be the friendliest of team mates.

There was a 3rd British competitor in the 1500m final. Steve Cram had to aim high if he was to be even a worthy 3rd best. By 1983 he was the World Champion. It was an amazing time for British middle distance running where we had the 3 best in the world. However they did not run against each other very often. We would go to Crystal Palace and watch all 3 win separate races with world class turns of speed. I’m sure that the egos of the protagonists got in the way. Maybe now with the benefit of hindsight they regret that they did not bring the best out of each other in more races.

In 1984 I hoped to see the above image into the last bend of the 1500m final. It was not to be. Ovett had respiratory problems and failed to defend his 800m title. He stepped off the track at the beginning of the last lap. Coe went on to defend his title and Cram won the silver. It really was a golden age for British athletics with medals and world records for all 3. Steve Ovett remains a sporting hero of mine for his ability, his attitude and his cussedness. I would have loved to have had the chance to have bought the man a beer.