I was only 11 years old when radio stations, operating from ships outside of British territorial waters, began broadcasting non-stop Pop. In 1964 I was already a little obsessed by music, more than just a Beatlemaniac, I found the rush of creativity from young British musicians to be the most exciting Art around. My parents had kindly provided a spanking new Dansette record player for the previous Xmas (to be “shared” with my younger sister. Like that was going to happen !) but my stack of 7″ 45s was small & Auntie BBC, neglectful of a new audience, shackled by a meagre ration of “needle time”, really didn’t get what was going on. Pirate Radio (could they have come up with a cooler name ?) were playing all the hits & more to an audience of 15 million but not in our house. “That’s right kids, don’t touch that dial” was was a rule set by the old folks. I did get my own portable, transistor radio, a hand-me-down from someone in my large extended family. It was more formal Fifties model than Swinging Sixties & boy, I wish I had it now. Everybody thought that I got a lot of homework from school but I was in my bedroom, somewhere in the mid-Atlantic, listening, more often than not, to Radio London,  “Big L”.Unfortunately the government were having none of this fun & the Marine Broadcasting Offences Act blew the boats out of the water in August 1967. My best friend & I determined to catch as much as we could in that final month. John Peel’s Perfumed Garden show, the only place to hear the new underground sounds, started at midnight. I listened quietly, the radio under the bed sheets, my younger brother asleep across the room, trying to stay awake for as long as possible. Some nights I managed a whole 15 minutes ! On August 14th, after playing “A Day in the Life” by the Beatles, a track you would never hear on the BBC, Big L stopped broadcasting. The #1 on their final Fab 40 was “Heroes & Villains”. We knew who was what.

It’s tough to select one tune from that pirate period so I’ve gone for something released at the end of 1967. On “The Who Sell Out” the group wanted to make aural Pop Art, fresh, fast, flashy, & fun. They chose to link the songs with Radio London’s jingles, recorded by the PAMS company in Dallas (I’m not sure if they obtained permission) & their own commercials. The concept worked well, “…Sell Out” is my favourite Who LP & just the best way to remember my station of choice from back then. All together now… “What’s for tea Mum ?”.

So it was “wonderful” Radio 1, staffed by many former freebooters, its mid-morning/early afternoon shows shared with the less wonderful Radio 2, which the BBC transmitted to an audience with little other choice. Caroline persevered with less resources & an air of resignation, supplies coming from Holland. Radio Luxembourg, around since the 1930s, music-based from 1960, was hardly hip to the trip & never really had been. It was 1973 before the government allowed a network of independent local commercial stations to challenge the BBC’s monopoly. There were still good shows being aired. John Peel found his corner at the BBC, playing an intoxicating mix of the wild & wonderful for over 35 years. The indies often scheduled an evening of off-playlist music while, in London, Capital’s Roger Scott hosted Cruising, a Friday rush hour of energetic American graffiti. The forced cheeriness of the daytime output, with presenters who you suspected didn’t really like music, grated very quickly. We all knew that “the radio is in the hands of such a lot of fools trying to anaesthetise the way that you feel”.

After I moved to that London I was sure that I would find something interesting on the outer edges of the dial. Some communities did have their own set ups & the change of scenery was refreshing. In 1981 we found somewhere that seemed like just the place to hang out. Initially Dread Broadcasting Corporation only broadcast for a few hours a week from founder Lepke’s Neasden flat. They played the Roots Reggae you wanted to hear & the sound system operators knew how to present it. By 1983 people knew about it & it was a 12 hours a day, 7 days a week operation. The late, live mixes were essential, there were Funk & Soul, Jazz & Soca shows too. DBC really was an upful, vibrant thing, community radio that should have been encouraged but illegal & hounded off the air by the end of 1984. Their big tent at the Glastonbury Festival was my late night venue of choice in the early 1980s. Dancing until the bag of goodies ran out or I fell over, whichever came first. 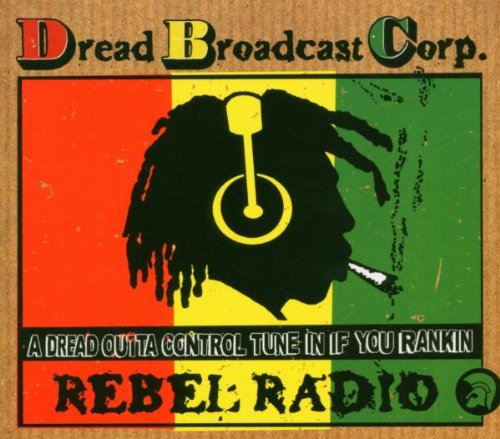 Reggae stations did reappear but Lovers Rock was carrying the swing, a little too sweet for my taste. It was the new Soul stations. Kiss & Horizon, which caught our ears in the mid-80s. Hip Hop & Electro were bubbling up & these fresh new sounds were what we listened to & bought back then. We, of course, would tape our favourites & I think the DJ at the club in Deptford we frequented lived next door because he would play all our new hit picks at the weekend ! Both stations were very popular & many smaller stations sprung up. The authorities encouraged them to give it up with the offer of a fair hearing at a licensing committee. Kiss FM returned as a legit operation but maybe the era of the celebrity DJ, branding at the expense of the music, didn’t help. Maybe it was just that being legal was not as much fun. Anyway, we were waiting for a pirate TV station, operating from a car driven around the Crystal Palace transmitter. We heard the rumours but we never found it !

It was later that we had a pirate station of our own operating from our South London flat. On Friday nights a bunch of young anarchists from Camden would call around, the more intrepid of them would take the transmitter to the roof along with a pre-recorded cassette, 90 minutes of subversion. They had to stay up there to swap the tape around half way through. The others sat quietly in our living room, accepting our hospitality of tea & biscuits all round. They were just kids & the most polite anarchists you could wish to meet.

One night we had places to go, people to see & left them to their business of smashing the state. On our return in the early hours the gang were still around. The running-dog lackey of a caretaker had put the police on to the renegades. One of their crew had hidden & was now locked on the roof of the 12 storey tower block. We kicked a door in, that either hadn’t occurred to them or was considered to be too drastic & rescued the frozen fugitive with ice forming in his dreadlocks, taking him back to base for more warming beverages & baked refreshments. That was the end of Radio Free Camden. The guy’s name was Fiddler…”Fiddler on the Roof”, you could not make this stuff up, so I’m not.