This year I intended to start a monthly bulletin of music from the British underground from 50 years ago. Based on information provided by the good people at the Marmalade Skies website January’s went just fine. February proved to be a little sparse & I struggled to find three tunes to feature. Not wanting to short change my valued reader (Hi Micky), I stopped doing that weeks ago, I gave it a swerve & regular has become occasional. Things have picked up for March 1969 & it’s time to remount the giant albatross which flew through a crack in the cloud to a place where happiness reigned all year round. So, are you all seated comfly-bold two-square on your botty? Then I’ll begin. There’s a strong argument to be made that Kaleidoscope are the great lost band of British Pop-Psych. The 2 albums released by the 4 piece from London, “Tangerine Dream” (1967) & “Faintly Blowing” (1969), have continued to attract interest even devotion from those who either missed them or were too young the first time around. The group’s pop-pastoral intent, influenced by “Strawberry Fields Forever”, Syd Barrett & Donovan, is very well realised. Personally I find the lyrics of vocalist Peter Daltrey, feathered tigers & porcupine captains, a little prolix. I prefer my fantasy to be sturdier, more Mervyn Peake than Tolkein. Hey, pop a microdot on my tongue & I may tell you something different. It is the music of guitarist Eddie Pumar, interesting instrumentation & effects, a crisp, sparkling production by Dick Leahy, that gives the records a stylistic consistency & an enduring appeal. “Faintly Blowing” aims for a bigger, heavier sound & is more than capably handled by the group.

Kaleidoscope were well supported by the small bohemian cadre on the UK’s only music radio station but failed to find a large audience. 4 of the group’s 5 singles were not included on the LPs. The intention with these melodic but more lightweight songs was to crossover on to the daytime shows & grab a hit. It could have worked, careful if you click on “Jenny Artichoke”, it’s so flipping catchy you will be humming it all week wondering just how it didn’t make “Top of the Pops”. “Do It Again For Jeffrey” is in a similar vein, the big chorus sounds like one of those Beatle steals that Oasis were so partial to. The obvious, long term strategy would have been to have used the singles format as promotion for the albums. The record company, a little behind the changing times, knew better. Kaleidoscope re-branded as Fairfield Parlour for one more album of cultured, harmonious Progressive music, one more nugget that remained unappreciated for years. 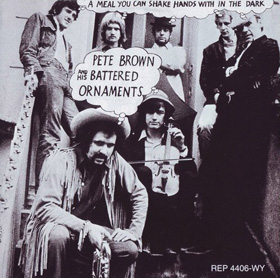 When poet Pete Brown added music to his words the First Real Poetry Band had some major players including John McLaughlin off of Mahavishnu Orchestra. Cream needed  lyrics for their music & he was in the right place, making a lasting connection with bassist Jack Bruce. “I Feel Free”, “White Room”, “Sunshine of Your Love”, in fact if it wasn’t a Blues jam, a drum solo or “Badge” Pete was involved. His greater visibility & the sizeable royalty cheques led to the formation of Pete Brown & his Battered Ornaments. With the former John Mayall saxophonist Dick Heckstall-Smith moonlighting from Colosseum & tyro guitarist Chris Spedding they made the scene with the LP “A Meal You Can Shake Hands With”, an unruly mix of Jazz, Blues, poetry & studio improvisation is a snapshot of the influences & variety to be found in 1969’s British underground music. I have friends (Hi Andy!) who love this sort of stuff.

“The Week Looked Good On Paper”, a single released this month, is a little more restrained than the material on “A Meal…”. The next LP “Mantle-Piece” was recorded & a place on the bill for the Stones in Hyde Park free concert set (through the group’s management Blackhill Enterprises who organised the gig) when Pete, an individual & unpredictable performer, was sacked from his own band the day before. The Battered Ornaments played in the park, Chris Spedding replaced the poet’s vocals on the record. Undeterred Pete was soon back on the road with Piblokto & recorded the finely titled “Things May Come & Things May Go But The Art School Dance Goes On Forever” (1970). The Ornaments folded & Spedding went on to play with just about everyone you have ever heard of.

This month saw a great line up at Mothers, a former ballroom above the furniture shop on Erdington High St Birmingham, near the small precinct, you know it. Mothers only ran from August 1968 to January 1971 & was quickly established as a fixture on the underground gig circuit. I moved to Erdington in 1975, right place, wrong time. My good friend Clive was on the spot, it was a short walk, a longer stagger back every weekend to catch the brightest new groups in the country. On March 22nd it was 50p (67 cents) to see Led Zeppelin who were to release their debut LP in 9 days time (it was already available in the US). We were huddled around a small radio in a Yorkshire youth hostel to hear “Communication Breakdown” for the first time. Imagine doing the same thing while Led Zep, live & loud, were yards away in a small North Birmingham club.

The British Blues Boom, led by the John Mayall’s Bluesbreakers diaspora, hit a commercial high in January 1969 with “Albatross”, an instrumental by Peter Green’s Fleetwood Mac, making the UK #1 spot. Bassist Andy Fraser played with Mayall’s band when he was just 15. His next band were the young guns of the scene, friends who saw one of the early gigs by Free came back raving about the energy & excitement they had witnessed. This was more than youthful brio, the 4 teenagers had skills too. “Tons of Sobs” Free’s debut LP was in the shops on March 14th 1969. Pretty much their live set, recorded in a few days with producer Guy Stevens (Mott the Hoople, “London Calling”!, just out of prison), it’s raw, raucous & it rocks, Fraser & drummer Simon Kirke are a powerful rhythm section, guitarist Paul Kossoff, a precocious talent & singer Paul Rodgers a braggadocious, forceful frontman. There was a greater than the sum of its parts thing going on here. 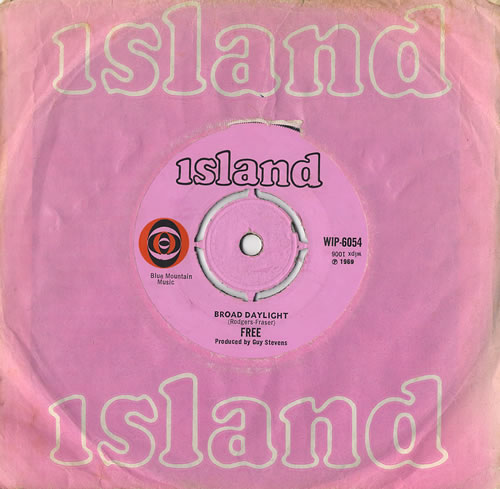 “The Hunter” is an Albert King song written by Booker T & the M.G.’s, a modern Blues & a discerning choice for a group less attached to purism than other British players. A 45 not included on the LP was also released in March 1969. “Broad Daylight” is from the burgeoning songwriting partnership of Fraser & Rodgers, prolific enough to provide another collection later in the year when the song was re-recorded. The single, like “Tons of Sobs” was not a great commercial success but Free would find their feet, make their mark & could have joined the top rank of British Rock bands. That deserves a post of its own, some other time. But for now…