It’s the time of year that Loosehandlebars invites anyone who rocks up & can be bothered, to contribute their picks of the year. First up is Dr Fergal Corscadden, guitarist off of Derry noise merchants the Gatefolds. Dr Fergal is a real doctor just not a medical one. I’m still going to get him to take a look at this embarrassing rash of mine though !

A suck bag of a year: the death of some of the most celebrated musicians to have ever walked our polluted planet – mix into that a year scourged by a rapid, domino-effect decline in sensible politics (if ever such a thing existed) and you’ve got your suck bag. Yes, some would say 2016 has been evil; a fucking tremendous annus horribilis. But, this isn’t a blog-piece about that. No, I’m here to talk all things my top 3 releases of the year. I’m not choosing some of the more obvious choices among the massive hits this year, I guess that many fellow bloggers/contributors will no doubt mention those. Instead, I’m going to talk about ones that fell slightly below the radar and/or which merit greater attention.

I’ll not say that there was so much to choose from, but, well, yip, there has been. From what I have managed to listen to so far it’s all been good. In my traditional style (“borrowed” from the Miss World pageant), the run down will be in reverse order from 3rd to 1st . Believe me, this has changed a lot over the last week or so.

3       And, nudging fellow Manchester no-wave outfit Cabbage out of 3rd place, is DUDS. Like many new bands I’ve had the pleasure of listening to in 2016, BBC 6Music has been my main source so hats and scarfs off to them. DUDS released 3 EP’s in 2016, two of these, “NLP” & “Unfit For Work” are available (name your price) at their Bandcamp page . The 3rd EP, on physical release October 28 2016, gave us the jerky, quirky angular guitar laden ‘No Remark’. If young bands today are writing stuff like DUDS (and there are many…. Institute, Cabbage, Ulrika Spacek, Kane Strang to name a few), then there is a great future for music as we approach the end of the 2nd decade of the 21st Century. Every time I listen to this, it sounds like my very first time and at the end of it I want to hit repeat. So, go on, you know you want to…. DUDS/’No Remark’

2    #2 slot is firmly occupied by ‘Preoccupations’, by Preoccupations. The Canadian band described as ‘labyrinthine post-punk’ and formerly known as Viet Cong, released a substantial album in September 2016. Under their old moniker they threw out jams like ‘Continental Shelf’ and ‘Bunker Buster’ from their self-titled debut album ‘Viet Cong’. With the name change comes a change in sound. I think the new album, the difficult 2nd one, has a much more mature and focused approach. Take ‘Memory’ for example, at just over 11 minutes you might think that things could get a little samey, and that’s when they crank things up, change direction once again and finish the track off with 6 minutes of dreamscape ambience; you have to watch the video for more on this. Their sound, while holding onto their uniqueness, which comes from the very 80’s sounding vocals of Matt Flegel, is difficult to pin down, but why would you want to, their fantastic music is already enough of a preoccupation… Preoccupations/’Memory’

And…drum roll…the winner is…the tenth studio album from the incredibly talented Joshua Paul “Josh” Davis, aka DJ Shadow. Every single track on every album release since 1998s ‘Endtroducing’ stand out as masterpieces to me. This guy had me right from the start of his 18+ year musical career as DJ Shadow. The new album ‘The Mountain Will Fall’ is no exception folks. 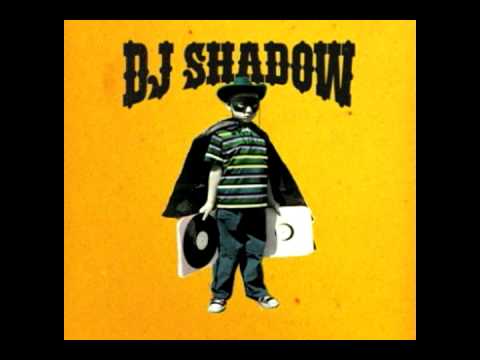 Right from the get-go, opening track and album title track, we get a “Hi” to welcome us in. This is one of my favourite tracks on the album because it is a down-beat instrumental hip hop track that grabs you by the shoulders and gives you a hug and says, “come on in, sit down, enjoy yourself, now, are you ready?”. The other outstanding tracks for me are track 4 ‘Bergschrund” featuring the German composer/producer Nils Frahm’, track 6 ‘Depth Charge’; and the final track on the album ‘Suicide pact’. I have to say, this is one of those special albums that upon repeat listen, you hear more and more each time. Happy listening folks! DJ Shadow/’Bergschrund (feat. Nils Frahm)

N.B. If Loosehandlebars hadn’t pulled rank & grabbed Underworld’s ‘Barbara Barbara, We Face a Shining Future’, that would have been my No. 1 album, ya sod ye! ;).

This year Fergal treated me to my first ever gig in the Republic of Ireland, a fine night with good people seeing Hookworms do their thing in Letterkenny. Now he’s handed me 6 minutes of “dreamscape ambience” & a hug from DJ Shadow. Let’s hope there will be more nights in 2017 including a show by the Gatefolds who, I’m told, are ready to go with some new material.