`OK, the Billboard R&B chart from 50 years ago. The first two weeks of the month found James Brown, “Soul Brother Number One”, “Mr Dynamite” or, my favourite,” the Minister of the New New Super Heavy Funk”, enjoying yet another #1 record. “Give It Up Or Turnit Loose” marked the 8th time he had made the top of the R&B chart & there were to be 9 more,  incredible. The next chart toppers were The Temptations & “Runaway Child Running Wild” was their 9th single to do so. A striking thing about the listings for the 22nd of March was that at #2 was a singer who had played a major part in the previous success of the Motown vocal group. 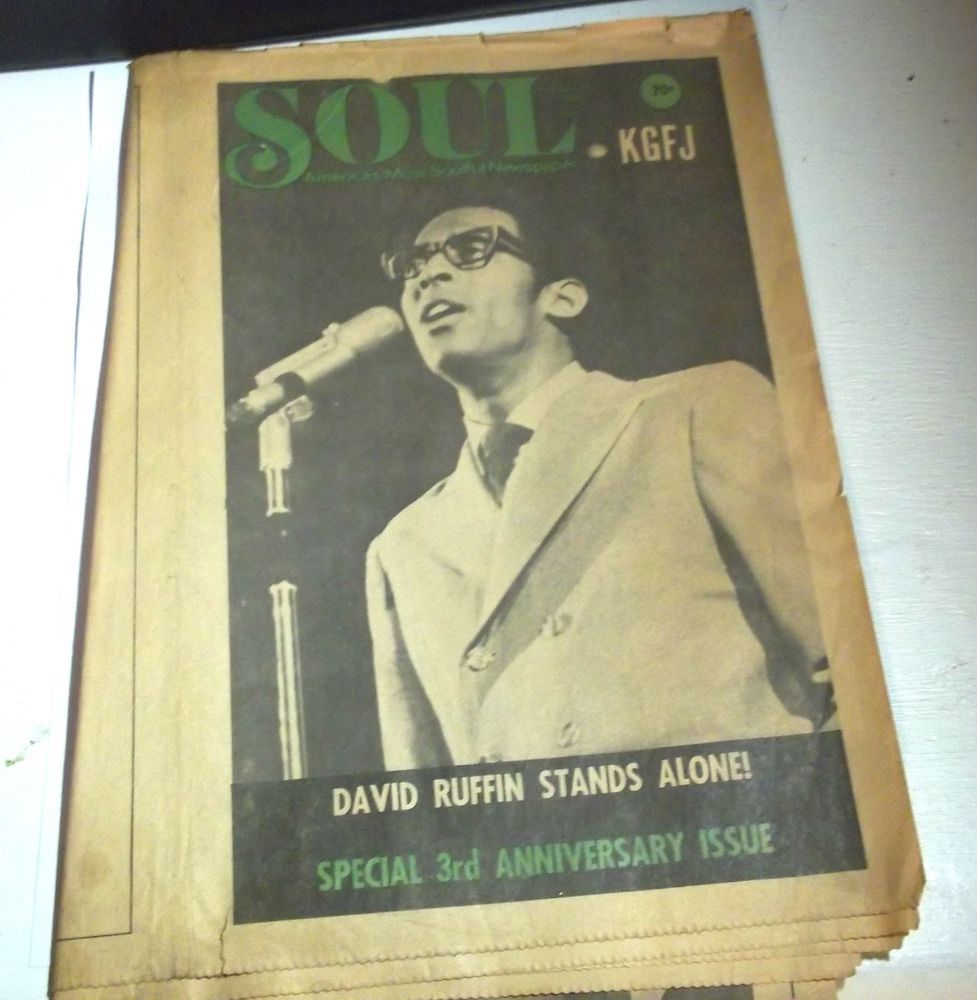 The authentic star power of David Ruffin, a man comfortable in the spotlight, & the dramatic swirling “My Whole World Ended (the Moment You Left Me)”. David was fired by the Temptations in June 1968. The story of the split has been told by many sides (books of varying quality, an awful TV movie) & he never comes out too well in the telling. Money, drugs & ego are all well & good but do tend to be a volatile mix. Wanting to alter the name of the group to “David Ruffin & the…” was never going to fly with the 4 other members who had all been Temptations longer than he had. He was the featured vocalist on “My Girl”, “I Wish It Would Rain”, “(I Know) I’m Losing You” & others you know, so that’s who he is, a great talent & he had made his contribution.

After an awkward standoff between David, who announced he was fronting a new group, & Tamla Motown blocking appearances by them, he signed to the label as a solo artist. The whistles & bells were pulled out for the debut single & “My Whole World…” is from the top rank of Motown Chartbusters. The subsequent LP is a great showcase for Ruffin’s unique rough-hewn voice, earthy, still sweet & never too harsh. There are plenty of echoes of past glories, songs & stories of thwarted & lost loves, though not by Smokey Robinson or Norman Whitfield. The label’s fabled quality control could have insisted on a little more work on them. Things were changing in Detroit, Marvin & Stevie were taking control in the studio, Whitfield & the Temptations had their “Psychedelic Soul”. A little extra was needed now & the next 45 from the record, “I’ve Lost Everything I’ve Ever Loved”, was not as successful.

Eugene Record had been plying his musical trade in Chicago for a decade. His group, the Hi-Lites became the Chi-Lites & the patronage of producer/label head Carl Davis placed his compositions with other artists from the Windy City. Eugene had co-written & produced the hit instrumental “Soulful Strut” for Young Holt Unlimited & March 1969 was the month that things really started going right for him. At #10 “Give It Away” was the first hit for the Chi-Lites. They were able to maintain this success &, a couple of years later, were right up there with those new groups from Philadelphia. This wasn’t the only reason for celebration. A couple of rungs higher, at #8, was another of Eugene’s songs. 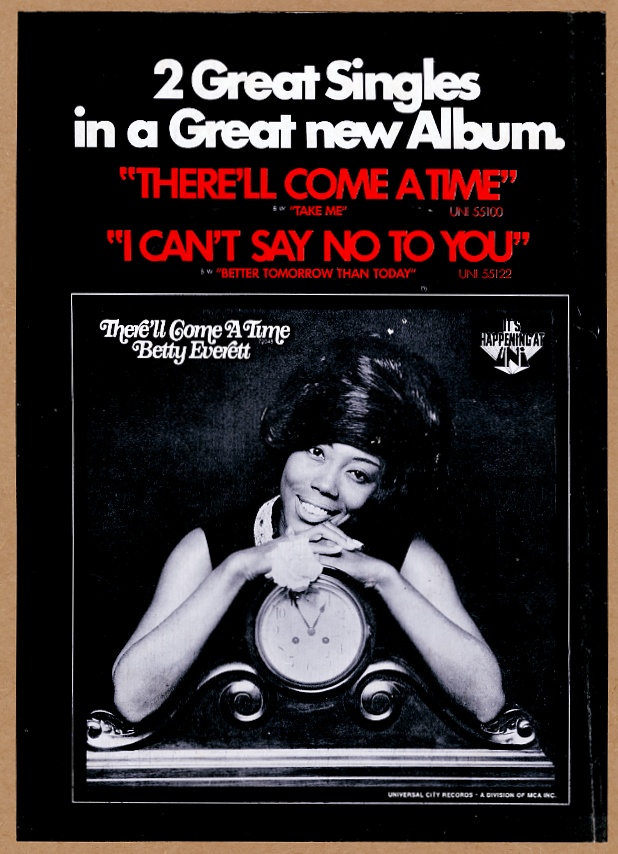 Betty Everett made enough of an impression between 1963-65 for her label Vee Jay to issue a “Very Best of…” LP. “The Shoop Shoop Song (It’s In His Kiss)”, that’s the one that everyone knows but there were other notable ones, popular Soul dance hits, delicious duets with Jerry Butler. Vee Jay’s financial troubles left her stranded & it wasn’t until 1969 that she could do it properly again. The lush, swaying “There’ll Come A Time” & the rest of an album packed with good tunes & arrangements, shows Betty to be assured, effortless & versatile. She may not have been as distinctive as some of the more prominent female singers of the day but she did everything with class & caught your attention every time.

The highest new entry this week was “I’ll Try Something New”, the second single from the high profile (a TV special!) collaboration by Diana Ross & the Supremes & those Temptations again, in at #23. There were other entries from big hitters Gladys Knight & the Pips, Aretha Franklin & Sam & Dave. You got me when it comes to Debbie Taylor, Vernon Garrett, Laura Greene & Johnny McKinnis but I’m getting on it. All very good I’m sure. In at #44 was another enduring, talented vocal group & I never miss a chance to listen to the Dells.

After having their first hit in 1956 the five piece Dells barely troubled the charts while establishing a reputation as a live act. Signing with the Chicago label Chess they were matched with songwriter/producer Bobby Miller, the outstanding, innovative arranger Charles Stepney & their fortunes changed. The guys in the backroom brought the best out of the powerful baritone of Marvin Junior, the startling range, from tenor to falsetto, of Johnny Carter & three others who had known just how the backing vocals went since the days of Doo-Wop.  The uptempo, uplifting “Hallways of My Mind”, an intoxicating Chi-town mix of brass, strings & voices, is from a chain of fine records, Soul belters, last dance smoochers, imaginative takes on the  classics. Whatever the Dells turned their voices to worked. I have an e-friend who rates the Dells alongside any of the great American vocal groups & she’s not usually wrong about most things.

A couple of years later Bobby Miller moved across to Tamla Motown to ride shotgun on the next record by David Ruffin. David had become something of a problem for the label &, in 1971, a perfectly good collection of songs, all sequenced & with a catalogue number, was shelved. (It wasn’t released for over 30 years). The resulting eponymously titled LP, his third, matched his voice with tailor-made material that did justice to Ruffin’s growing maturity. See what I did there, I finished this thing by bringing it back to the beginning. I don’t just make this stuff up as I go along y’know, I said I don’t just…