I first became aware of Liz Smith, who died this week aged 95, in 1973 when she starred in “Hard Labour”, a BBC TV drama directed by Mike Leigh & produced by Tony Garnett. The weekly “Play for Today”, like its predecessor “The Wednesday Play”, was a forum for many emerging British talents. The strand encompassed a wide variety of styles & subjects. It was the hard-hitting & effective social realist themes, a development from kitchen sink dramas of a decade earlier which often provoked controversy. “Hard Labour” was Leigh’s first TV play, it employs his improvisational technique to achieve a naturalism & a bleakness unleavened by the humour to be found in his later work. Mrs Thornley, harassed by her husband, patronised by her middle-class employer & offered no solace by her religion, is a study in isolation & limited communication. Liz Smith was outstanding in the part & she broke our hearts.

There’s very little of “Hard Labour” on the Interwebs so let’s move on a couple of years to her next starring TV role. “I Didn’t Know You Cared” was a sit-com adapted from his own novels by Peter Tinniswood. It ran for 4 series from 1975-79, another slice of Northern life, this time across the Pennines in Yorkshire. The Brandon family were a wonderful parade of absurd characters, the men cloth-capped, gloomy & cynical, the womenfolk keeping a close eye on them & their faults. It had a terrific ensemble cast, was tougher than the long-running “Last of the Summer Wine”, with the gentleness & acerbity of Alan Bennett. At the heart was Liz Smith’s Mrs Brandon, hen-pecking, haranguing & hilarious, nailing some of the best lines of a very good bunch. Some right old toot from the same period is now recycled on the nostalgia channels with no sign of this classic British comedy.

Ms Smith was in her fifties before this acting thing really took off. Her talent to portray the slightly mad but always likeable Grandma found her plenty of work in film & TV & she quickly became a very recognisable character actor. Her cinema work included Lindsay Anderson’s “Britannia Hospital”, Ridley Scott’s debut “The Duellists” & she was Lady Phillippa of Staines in Viv Stanshall’s brilliant “Sir Henry at Rawlinson End”. She was perfect for the BBC’s adaptations of Dickens & appeared in Michael Palin’s “Ripping Yarns” classic episode “The Testing of Eric Olthwaite”. It would be 1984 before she gained recognition from her peers for her talents.

Handmade Films, a British production & distribution company, was formed by George Harrison when his Monty Python friends were struggling to finance “Life of Brian”. The story goes that George had to mortgage a house but I don’t think that he ever went short. In the next decade Handmade were involved with many fine British films. “A Private Function” (1984) is as close as this to the gentle, eccentric comedies made by Ealing Studios in the 1940s & 50s. Alan Bennett was an international success in 1960 with “Beyond the Fringe”. He continued to act while becoming better known as a writer for TV & theatre. This was his first screenplay, perhaps having less substance than his plays but no less lacking in the acuity Bennett has for language & the intricacies of social interaction & manners. 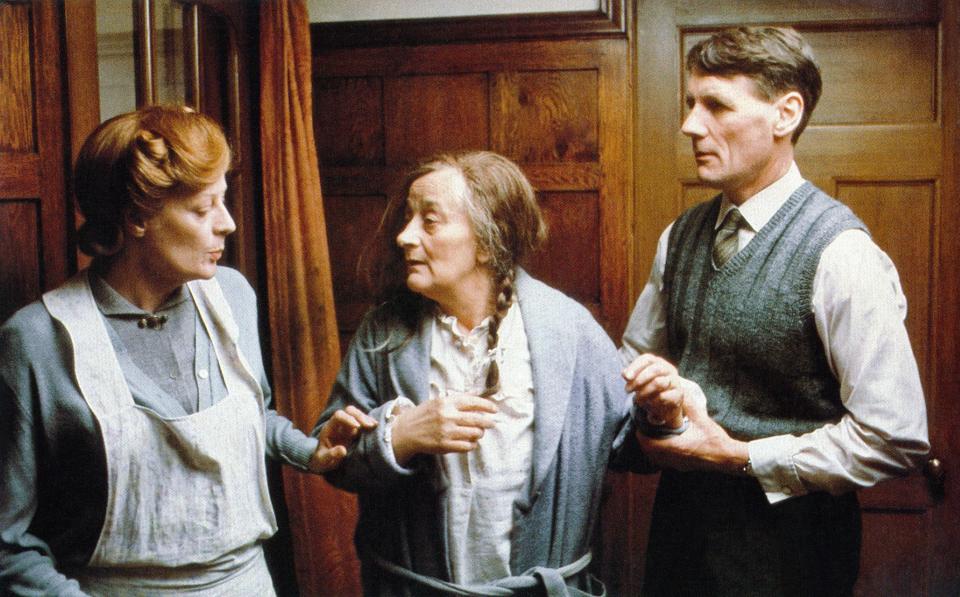 “A Private Function” is set in post-Second World War Yorkshire when food was still rationed. The social climber Joyce Chilvers (Maggie Smith) is determined to make her mark in the town & intends to drag Gilbert, her chiropodist husband, (Michael Palin) along with her. A pig, being illegally fattened for a municipal celebration is kidnapped by the Chilvers & hilarity ensues…really it does. Along with the great writer & the two illustrious principals the cast involves an overflowing National Treasure chest. Denholm Elliott, Alison Steadman, Pete Postlethwaite & others all do their distinctive thing while Liz, as Joyce’s mother, driven mad by the smell of the secret pig, thinking that perhaps she could be the source of the odour, won the BAFTA for Best Supporting Actress.

Liz continued to do the work, adding value to whatever she appeared in. In 1998 she was cast as Nana Norma in Caroline Ahern’s comedy “The Royle Family”.By this time she was 76 year’s old & the nation’s favourite grandmother, perfectly cast in a series which, along with Ricky Gervais’ “The Office” & Steve Coogan’s “I’m Alan Partridge” injected new energy & raised the standard of British situation comedy. “The Royle Family” was sometimes a kitchen sink drama but it was mostly on the living room sofa in front of the telly. The skillful characterisation, the pacing, the natural humour & affection made many people suspect that Aherne had placed a spy camera in their own homes to obtain material. This clip, from the 2006 special “The Queen of Sheba” where the new baby is introduced to the bedridden Nana will moisten the driest of eyes. A starring role in the UK’s most popular comedy brought Liz Smith even wider recognition &, in 2007, a British Comedy Award for Best TV Comedy Actress.

Liz Smith was born in my hometown in Lincolnshire. She’s from the Crosby area up in the north of town. She attended the secondary school which, years later with a change of name, in a different building became my school. That may be why, even in those early days  before I knew of her origins, I found her performances to be so convincing. She reminded me & so many others of our own grandmothers except that perhaps my Nana Daisy actually knew her as young Betty Gleadle. Sad events have made this appreciation into an obituary & that’s a pity. It’s OK because I am reminded of the talent of Liz Smith by the old ladies I talk to at the bus stop, in the market & around my estate. For these women, who have lived through some times, have seen & learned some things, Liz Smith represented.