Having lived long enough to be certain that Hell is other people, these days I rarely attend an actual cinema to see a film the proper way, on a big screen. Anyway,most of the movies that tempt me to part with my hard-earned do not star Sandra Bullock (“The Heat”, are you kidding me ?) or Seth Grogan so are not exhibited by my local multiplex. It was a worthwhile 60 mile round trip to catch Terry Gilliam’s “Zero Theorem”. We had to go further afield for “Stoker”, the Hollywood debut of master director Chan-wook Park. You are not just talking about a night at the pictures with Park’s films are you ? This is Cinema, Art which will still resonate long after that DVD of “Knocked Up” is just landfill.

It was Park’s “Vengeance” trilogy which put us on to Korean films. Tartan Video’s “Asia Extreme” releases covered movies from  Japan & Hong Kong but they were not all of the quality of  “Battle Royale” or “Hard Boiled”. “Oldboy” (2003) was an irresistible, visceral, bunch of amazing & it encouraged you to take a chance on other Korean films in the World Cinema rack at the video store (just 30 titles, all the culture you were gonna get down that street). These films were sharp, a little strange & of the 21st century. Cool, fresh entertainment that shook up the accepted ways of filming in both East & West.

Now the Koreans are moving to California. Park will always make provocative, beautiful movies on any continent. Bong Joon-ho’s “Snowpiercer” (2013) is as good a sci-fi romp, unpretentious & exciting, as I have enjoyed for a while…if you have not seen it then…Perhaps the most interesting debut is that of  Kim Jee-woon who last year revived a genre which seemed to be over & done. “The Last Stand” is, oh yes, a Schwarzeneggar movie. 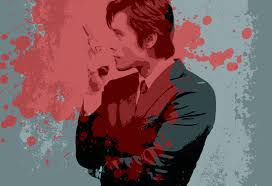 “A Bittersweet Life” (2005) is an addition to that Korean genre, the vengeance movie. It is a stylish, ultra-violent take on my favourite cinematic thing, the gangster film. Kim Jee-woon tips his hat to “Infernal Affairs”, the Hong Kong flick that is the touchstone for modern crime thrillers. There is also respect paid to “The Godfather”. The intricate set-pieces are operatic & tense, just like Francis Ford made them. Those big fights from HK were all getting a bit Jackie Chan…you get me ? In both “Kill Bill” & “Kung Fu Hustle” the battles are not only choreographed but actually became dances. Our hit man with a beef is less interested in busting a move with a gang of goons than ensuring that they choke on their own blood. Cool & deadly “A Bittersweet Life” is on the Y-tube. I got my copy for just 1 of our English pounds when the video store closed down. If you like gangster films then you know what to do.

There’s an “otherness” about this  modern Korean cinema. Seoul is a world city forged in the white heat of shiny new technology. It is though still close to the traditional agrarian society of the generation not on the Seoul train (ouch !). There’s plenty of “Blade Runner” city-of-the-future glimpses in these films but they also often remind me of Yashujiro Ozu’s perfect studies of a changing Japanese society. Anyway, how cool is the eastern promise of an Oriental mob ? Triad, Yakuza, whatever these Korean boys are, they are all good.

Next up for Kim Jee-woon was “The Good, The Bad & The Weird” (2008), an Eastern Western. That he was given the green light for his homage to Sergio Leone is a sign of the confidence of Korean cinema. Of course it is a rip-roaring romp of a movie only it’s a little long & the 3 protagonists a little lightweight. The shoot-outs, the chases, the pyrotechnics are just beautiful & the most fun you can have watching a film. Kim was ready for Hollywood but his film took just $128k at the US box office out of over $44 million worldwide. Come on America, this is fresh, the best there is, get on it, it’s only a sub-title.

Today I woke up to the sad news that Eli Wallach, Tuco, Il Cattivo had passed away. He was an  essential part in the creation of an enduring piece of cinema. “The Good, The Bad & The Ugly” inspired Kim to make his film & influenced any future film director who was paying attention. R.I.P. Mr Wallach.

I am not a big Arnie fan, of his films or his politics. I came up with tough guy heroes like Lee Marvin, Steve McQueen, Clint Eastwood, not big men but you would want them on your side. Schwarzeneggar & Stallone were steroidal mean motor scooters, half killing machine, half man of few words. Just some dumb ass one-liner & that’s it. Besides I had read the 1976 Rolling Stone interview (the same issue that Hunter S backed Jimmy Carter). I had seen “Pumping Iron”, I found Arnie’s narcissism & his intimidation of poor Lou Ferrigno unattractive. He & Sly were the action heroes that  the Reagan era wanted & deserved. “This ain’t  really your life…ain’t nothing but a movie”. 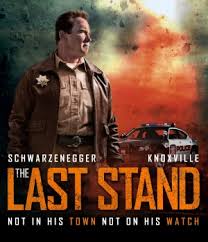 Ah but I was so much older then & Arnie is now 66, “The Last Stand” is part of his post-political career return to films & this thing is right up my street. Now, let me think why…Those Quentin Tarantino/Robert Rodriguez grindhouse joints are my thing too but they are always a little knowing. I still have to see “Machete Kills”. I know that there will be nods & winks to the audience tipping us off just how smart the director is for making a 1970s exploitation movie in the 21st century. That’s OK, all those films are entertaining. “The Last Stand”, with a hole-filled plot & some dumbass dialogue in a strange Austrian accent, just gets on with being imaginative & intelligent. A drug baron has escaped in a car from the future but, no problem, it’s only the Ghost Dog (Forest Whitaker) who is on the case. The Dog has strayed from the Way of the Samurai & the bad guy is getting away but has to pass through Sheriff Arnie’s burg. It’s a great cast, Peter Stormare, Luis Guzman, Jackass Knoxville & others but Kim Jee-woon is all over this film & knows what he’s doing.

The hardware (cars & guns) fetishism is as cool as you like. The climactic crescendo is a proper cinematic tour of force, a thrill free of video game mimicry or apocalyptic CGI nonsense with the spirit of Leone looking on. Arnie gets to do what Arnie has to do & gets some trademark one-liners too. “The Last Stand”, the cult action movie brought up to now.

Whether this “golden generation” (it’s a football thing) of Korean directors continues to work in the USA or returns home I will want to see what they create. It may be a little harder to do so because  Tartan Video’s success was followed by a  rush of  releases which were not always of the same quality. There is a limit to the number of cyber-animanga movies that you need to see & Tartan folded in 2008. It has been tougher to discover new Korean movies since then, the multiplex has got some over-priced popcorn to shift & good films by established directors struggle to be seen. Maybe Arnie & Kim Jee-woon can stay together for Sheriff Ray Owens in “The Last Stand 2”. Hang on…that doesn’t make sense !