I first became aware of Randy Newman (that’s the great) in the early months of 1967 when the Alan Price Set had a UK Top 5 hit with the lyrically dexterous “Simon Smith & His Amazing Dancing Bear”. Price’s previous group, his Rhythm & Blues Combo, had become the Animals who’s second single, the momentous British Beat interpretation of a folk standard “The House of the Rising Son” (1964), deservedly became a massive international success. The label of that 45 contained the words “Trad-arr:A Price”, an astute move on his part which triggered “musical differences” & his departure from the group soon after the first royalty cheques arrived.

The seven-piece Alan Price Set didn’t write their own material, the debut LP, “The Price to Play” (1966), was a mix of the American Blues, R&B & Soul they played on stage. In a shift in style, on 1967’s “A Price on His Head” there were no less than seven Randy Newman songs. Four of these were included on Randy’s own eponymous debut LP released the following year. By 1968 it was becoming a given that if you needed a song which combined individuality, direct emotions & a dry wit then he was your man. The list of artists who selected from his catalogue was long, impressive & growing.

Randy, who dropped out of his music studies at the University of California, was joining the family business. Three of his uncles were established composers of film & TV scores. The most notable, Alfred Newman, won 9 Oscars for his soundtracks. He went pro when he was 17 & “They Tell Me It’s Summer”, a b-side to a Fleetwoods hit record provided financial encouragement to the aspiring songwriter.  I know now that Randy had written songs before “Simon Smith…”. I was not aware of the quality of the artists who had recorded his music & that he had written familiar songs that had been sizeable hits in the UK. 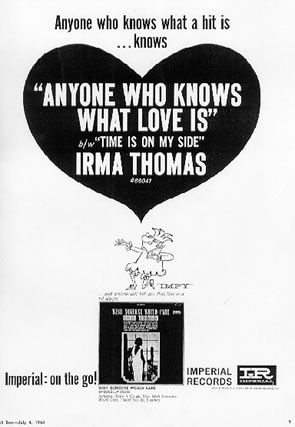 I didn’t know until recently that he has a co-credit for the incredible Irma Thomas song “Anyone Who Knows What Love Is (Will Understand)”. Imperial Records were based in Los Angeles, Newman’s hometown, & enjoyed much success through a connection with Dave Bartholomew, a major player in the development of New Orleans music. Young Irma already had a fine string of impassioned Soul ballads behind her when “Anyone Who…”, a co-write between Randy, aspiring Country singer Jeannie Seely, then a secretary at Imperial & two others who appear to have written little else, was paired with “Time Is On My Side” for a 1964 single. The latter proved ideal for the Rolling Stones brand of bluesy British Beat. The atmospheric, enchanting “Anyone Who…” has received greater recognition since it’s inclusion in an episode of Charlie Brooker’s “Black Mirror” series. Together they comprise one of the most desirable & satisfying 7″ plastic discs released in the decade. Click on the clip above because Irma Thomas was, & still is, quite something.

1964 was the year that Randy Newman’s name really started getting around. Established artists such as Bobby Darin, Lou Rawls & Jackie De Shannon picked up his songs. The most substantial, enduring title was “I Don’t Want to Hear It Anymore” given a dramatic interpretation by the consummate Jerry Butler, enjoying solo success after leaving the Impressions. A double A-side with “I Stand Accused”, there’s another covetable piece of vinyl. Over in the UK three Americans, the Walker Brothers were enjoying great popularity & the song was ideal for the expressive voice of Scott Walker. “I’ve Been Wrong Before” was a Top 20 UK hit for the Beatles mate Cilla Black &, in the  same year, appeared on “Ev’rything’s Coming Up Dusty” by Britain’s leading lady vocalist. Newman’s intriguing ballads & Ms Springfield were a great match. Her version of “I Don’t Want to Hear It…” was recorded for the impeccable “Dusty in Memphis” (1969). It makes the cut here because if you ever get the chance to listen to Dusty Springfield sing then take it.

Gene Pitney had his biggest US successes in 1962. There were not only 2 Top 10 singles but “Rubber Ball” (Bobby Vee), “He’s A Rebel” (The Crystals) & “Hello Mary Lou” (Ricky Nelson) were his songs that you know by other  people.He lost a little direction though “Gene Pitney Meets the Fair Young Ladies of Folkland” (1964) is worth having for the title & cover. The two 1965 albums of duets with Country legend George Jones have worn very well too. His first UK hit, 1963’s “Twenty Four Hours From Tulsa”, Bacharach & David’s capsule soap opera, was an obvious quality item, A visit over here with Phil Spector,  hanging out with the Rolling Stones, recording an early song of theirs, made him kinda cool. His career revived in the US but he always seemed more popular in the UK. Two of his 11 Top 10 singles here were written by Randy Newman. “Nobody Needs Your Love (More Than I Do)” was another pinch of Jerry Butler, a quickened tempo, added orchestration & Gene’s trademark double tracked vocals gave him his usual hit. I probably have a preference for Jerry’s take but then if “The Ice Man” sang the weather forecast I would consider buying it.

“Just One Smile”, originally a B-side for the Tokens, a Doo-Wop group from Brooklyn, was Pitneyfied & added to his list of creditable hits. With a growing maturity & confidence Randy Newman began to develop a more individual style. Songs like “Tickle Me”, “So Long Dad”, “Mama Told Me Not to Come” & others displayed an original approach to the popular song, an acerbic wit & a slightly skewed view on Life through an assemblage of characters. He could still write those affecting, often slightly forlorn ballads & the queue to get a hold of his new songs got even longer. His own records were great then greater & don’t get me started on “Good Old Boys” (1974) because this is about Randy as a jobbing songwriter so…another time.

I was going to end this with the Nashville Teens & “The Biggest Night of Her Life”, a 1967 UK 45 which, for a couple of weeks I was convinced was headed for the charts. As I said there are songs that I know but I didn’t know Randy Newman wrote. Here is a version of “Just One Smile” by an absolute master of Chicago Soul & favourite of mine that I wasn’t aware of for years. It was recorded but failed to make the cut for Walter Jackson’s LP “Speak Her Name” (1966). Walter’s husky baritone, powerful & subtle, could make a grown man (that would be me) have a little something in his eye. Magnificent.

Irma Thomas was “The Soul Queen 0f  New Orleans” before we were talking about soul music. The songs she recorded in the early 1960s were pivotal in shaping the young sound of America which made African-American music a worldwide success later in the decade. The quality of young Irma’s work is so high that it’s tough to choose just one but I’m the king around here and this is the one for me.

“Ruler Of My Heart” was written and produced, like all Ms Thomas’s early 45s, by Allen Toussaint, the mastermind of so much thrilling music from New Orleans. Otis Redding pinched the tune for “Pain In My Heart”. Toussaint successfully sued the Stax label for compensation. It has a charm,a power and an almost stateliness that marked all her songs. “It’s Raining”, so effectively used in the Jim Jarmusch 1986 film “Down By Law”, and the later “Time Is On My Side”, covered by the Rolling Stones, have a similar effect. When I checked out the timeline for these records (I don’t just make this stuff up) I was surprised to find that none of these were major hit records. You have got to be joking me, these are classics.

Irma moved labels and did have more success with emotive ballads. Come 1965 , 1963 was so over and everything had to be new. She was signed to some big labels, Chess & Atlantic,  but the material and the times were against her.

In 1970 Irma began a record with writer/producer Jerry “Swamp Dogg” Williams Jr at the Muscle Shoals studio in Alabama. Mr Dogg was a prolific producer of “deep soul” music and when he got it right he was unrivalled. “In Between Tears” is the title track of the record which was eventually released in 1973 on the Fungus label (no, me neither). Irma is all grown up now, her voice huskier and stronger. Her confidence is reflected in the material, the arrangements showcase the voice and the LP is a masterpiece. At the time it made no real impression.

On “In Between Tears” there is a 12 minute track which I would not presume to include here. A monologue about, y’know, men and women, “”Comin’ From Behind” is similar to those that Millie Jackson sold bundles of just a few years later, only it is funnier and better. This segues into a remake of her biggest hit, “I Wish Someone Would Care”. The climax of the song is precisely that, orgasmic for the singer and the listener. Swamp Dogg has spoken of the sexuality in Irma’s voice and he captured it in this track. There is also evidence of the ability of the session guitarist Duane Allman and what a great loss to music his early death was at the age of 24. If you do have 12.34 to spare and you love soul music then seek this track out.

Irma made fewer records, opened a club in New Orleans and continued to perform and to be highly respected. It took the terrible events of 2005 and the aftermath of Hurricane Katrina to remind us what we had been missing for so long. Irma Thomas’s personality, her humour and strength, became a symbol of the resilience of New Orleans. To see her, as cameras capture the devastation to the city was an inspiration. This interpretation of Bessie Smith’s “Backwater Blues” is from a concert to honour and benefit New Orleans.

Her 2006 LP “After The Rain” won her a Grammy. Her current standing is higher than ever. Her early music is still being discovered by new listeners. All I can add is that she deserves it all.