OK. let’s get current. Today, May 27th, is the release date for “Mosey”, the 5th solo LP by Daniel Romano. Despite the antiquity (timelessness ?) of many of the tunes I feature here, I do listen to new music & not just as confirmation that the old music is better. The Underworld LP “Barbara Barbara We Face A Shining Future” will sit nicely on the shelf next to their 2 classic records of the mid-90s. Louie Vega’s Soulful House productions for Caron Wheeler & Cassio Ware are from the top rank. I would listen to that radio station playing Prince Rama’s contagious single “Bahia” on double heavy rotation. The only 2 tracks I had heard from “Mosey” got me handing over the hard-earned in the week before release. If there were other songs as good as “(Gone Is) All But A Quarry Of Stone” it was best that I had them around. 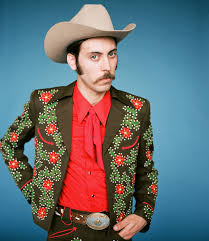 The last 3 LPs by Daniel Romano (I don’t know 2010’s “Workin’ For The Music Man”) have established his reputation as a consummate Country & Western stylist. His harder than a heartbreak lyrics, matched to recreations from Buck Owens’ Bakersfield honky tonk & the more countrypolitan Nashville of George Jones, are assured & affecting enough to ameliorate suspicions of mere revivalism. Elements of homage & pastiche, the sequinned country threads, are balanced by a respect for & an understanding of the structure & the sentiment of how these songs went.”Hard On You”, “There Are Lines On My Face” & others are retro-modern, distinct enough to have made an impression at any time since Hank done it his way. Romano called this music Mosey, a place he was “the King of…”. This new collection indicates that Mosey is a little further from Nashville than we thought.

The opener, “Valerie Leon”, is an uptempo theme to an imaginary Western, more Elmer Bernstein than Morricone, expansive orchestration, a touch of Tex-Mex but not the full mariachi. “I Had To Hide Your Poem In A Song” is a dramatic Blues. Romano is augmenting his Country music with other American roots influences, the result is looser, dramatic & surprising. The songs are still a catalogue of torment & tribulation, no longer limited by the strictures of his chosen genre they are heavy on atmosphere. The choruses are less obvious but still, when they come, captivating. Daniel Romano is a fine songwriter. I’m going to, like everyone else, check for Lee Hazlewood here. Romano’s baritone, Western fatalism with a dry humour & new palette does bring the master to mind. That’s some good company to keep.

For the album cover & the “(Gone Is)…” video Daniel has swapped sartorial dudeism for an Adidas shell suit & a Bob Dylan circa-66 ‘fro. The LP version replaces the strings with a churchy organ swirl & remains a bleak delight (I do like a lament). There has always been an element of performance art about his work. I found similarities in the early work of Lyle Lovett & Tom Waits. The sentimentality & archness of his chosen field was overridden by the quality of the records. The incongruous videos, gorilla suits & sci-fi animation, were more than winks that there was more to Mr Romano than his country gentleman affectations.This new character ? We will see if he hangs around. For myself the proof is in the hearing & I’m liking what I hear.

“Mosey” is a big change from Romano’s previous records. There was a tip off on “If I’ve Only One Time Askin” (2015) when “The One That Got Away (Came Back Today)” ended with an odd, almost psyche, guitar coda. There are more of these on “Mosey”. He may be ready to leave the Country but I’m not sure that all his fans will accept this shift towards a harder edge. Me, I’m an open-minded guy. If there are more songs as good as “Hunger Is A Dream You Die In”, with its backwards guitar, & the rocking closer “Dead Medium” to come then I’m happy to ride shotgun on the journey.