Over here in the UK Tommy James & the Shondells were one-hit wonders & what a hit it was. In August 1968 the urgent, immediately catchy “Mony Mony” was toppermost of the poppermost for 3 weeks but little else by the group caught the attention of record buyers. Across the Atlantic Tommy & the boys were a much bigger deal, enjoying 9 Top 20 hits between 1966-69. They were prominent in interesting times & Tommy chronicled his own experiences in his autobiography ” Me, the Mob & the Music” (2010). It was a story he had wanted to tell for a long time but didn’t feel comfortable going into print until after the death of Vincent “the Chin” Gigante, head of the Genovese family. Fuggetaboutit  !

Tommy James first recorded “Hanky Panky” with his Niles, Michigan high school band. In 1965 renewed interest in Pittsburgh, where bootleg copies sold out, brought the record to national attention. By July 1966 19 year old Tommy, with a new gang of Shondells, had the #1 record in the US. The song was written in 1963 as a throwaway b-side for the Raindrops by New York young guns Ellie Greenwich & Jeff Barry. The boys took  a basic R&B tune into the Garage & made it even more primitive. They were surely too young & dumb to know they were making a million selling record & that’s the beauty of it. The group were signed to Roulette records run by Morris Levy, a New York scenester since the 1940’s. Morris knew guys with imaginative nicknames & equally colourful criminal records. He was also an expert on the connection between controlling the publishing rights of his roster & his bank account. He kept his new hit act busy, 3 LPs & a “Best of…” compilation were released in 1967. Levy was not really a record man, he left the group & their producers to themselves in the studio. It happened that Tommy James & the Shondells had the happy knack of making songs that grabbed your ear when they were played on the radio & made a lot of people want to hand over their hard-earned in exchange for a 7″ vinyl disc.

There was a stutter after the first hit, the copycat “Say I Am (What I Am)” stalled outside the Top 20 & “It’s Only Love”, a piece of fluff covered in the UK by Tony Blackburn, our lamest DJ, bombed. “I Think We’re Alone Now”, you know it, an instant Powerpop classic, put them back on track. Working with writer/producer Ritchie Cordell the 5 singles released in each of 1967 & 68 varied in quality but all had their appeal. “Mony Mony”, painstakingly assembled in the studio, is supercharged Garage Rock, everything kept simple & done very well. I was 15, dancing to this at the weekend youth club, my record collection small enough to investigate the b-side & learning that “1-2-3 & I Fell” sounded like a hit to me.

Times were changing. You can see it in the clip the band made for “Mony Mony”. Everyone has more hair. Is that a Nehru jacket Tommy is wearing ? The love beads have been shared around. Tommy spent time helping the campaign of Democratic presidential candidate Hubert Humphrey. On his return to New York he knew that the emphasis was now on the album rather than the 3 minute single. The group were established enough to produce themselves, prolific enough to release 3 LPs in the next 18 months. First up was “Crimson & Clover”, sleeve notes written by the losing candidate, which included 2 massive hits, the title track (#1) & “Crystal Blue Persuasion (#2). “Crimson & Clover” is a perfect Psychedelic Pop single, better than the Lemon Pipers, better than the Electric Prunes. Innovative effects extract maximum value from a monumental guitar riff & Tommy’s vocals. The LP veers across a range of styles & helped by the hits made the Top 10. Tommy James & the Shondells seemed to have cracked the album market.

The title track of “Cellophane Symphony” went the full lysergic. Tommy had got hold of a Moog synthesizer & he was going to use it. This time there’s an ambition that is probably not matched by the material. “Sweet Cherry Wine” is an obvious smash & I really like “Makin’ Good Time”, an old style Tommy James rocker which was only a b-side. The 3 comedy tracks are too many, maybe 3 too many & the LP failed to make an impression. 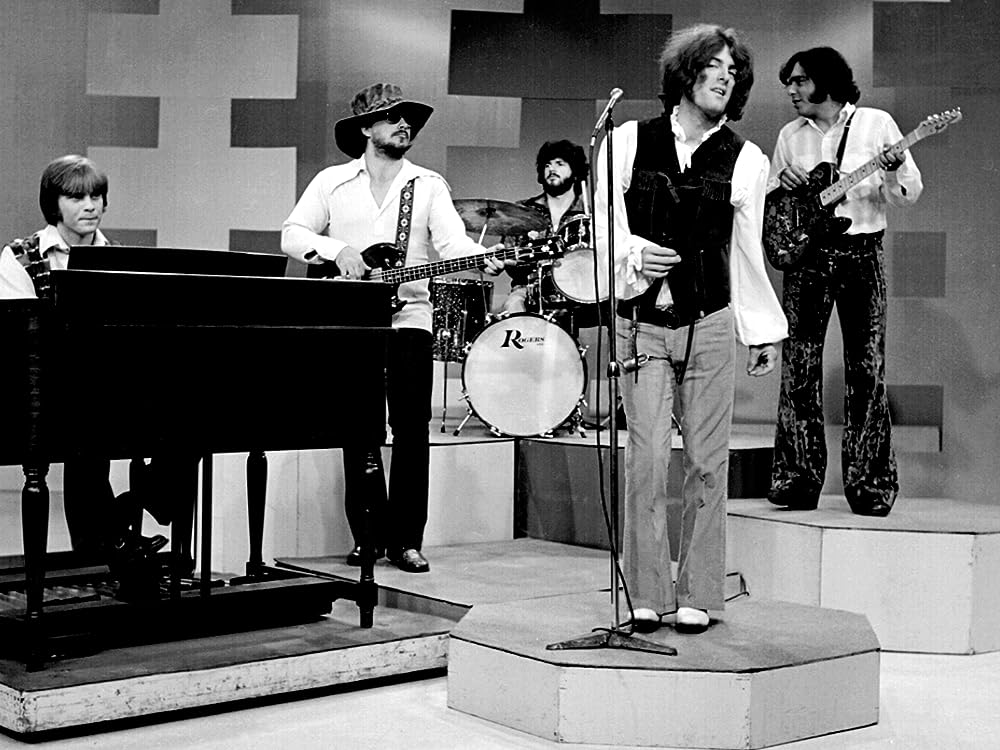 “Travellin'” (1970) got back to where they once belonged, a Blues-Rock simplicity that the band had always done very well. This clip is promoting the single “Gotta Get Back To You” & it’s not just the haircut that makes Tommy look rough. To keep up with the hectic touring & recording schedule Tommy’s drug of choice was amphetamines. After a gig in March he collapsed & was actually pronounced dead. Thankfully he survived & after recuperation the Shondells were no longer attached, Tommy James was a solo act. Those solo LPs are for another time. The memorable “Draggin’ the Line” put him back in the Top 10, there was another hit in 1979.  Tommy James was a 23 gold singles, 9 gold or platinum albums wonder &, he reckoned, around $30 million short of what Morris Levy owed him. In 1987,as an example of the sturdy, enduring nature of his songs, teen idol Tiffany took “I Think We’re Alone Now” (not as good as the Rubinoos) to #1 then was replaced by Billy Idol’s version of “Mony Mony” (not as good as the original).

Tommy is still around & Morris Levy isn’t. A 3 year long FBI investigation into the alleged infiltration of organised crime in the record business put his name in the frame for charges of extortion which got him a 10 year stretch. His health was failing & he died in 1990 before he could report to prison. There has been talk that Tommy’s book could be made into a movie. It’s quite a tale.

The group are unfairly labelled as a “Bubblegum”. “Hanky Panky” gave them an audience which they wanted to maintain. Tommy showed talent, inventiveness & above all adaptability to accommodate the rapid shifts in the music of the time & make commercially successful records. It’s not just the hits, the LPs contain plenty of interesting music too. Tommy James & the Shondells were never going to change the world, they didn’t want to but they deserve greater consideration in any review of 1960s American Pop music. I’ll finish with Prince, a man who always had an ear for a great song, & his grandstanding version of “Crimson & Clover”. Brilliant.