OK, there’s no football for a couple of days & while it’s probably not coming home the England team are still in Russia. I’ll be, like the rest of the country, shouting at the TV on Saturday afternoon, my neighbours will appreciate that it’s not my turn to host this time. Dan has only been in his house for a month, I’m sure that his new friends next door will be OK with the noise. Today is the sixth birthday of Loosehandlebars so let’s feature some of the music that has been filling the gaps between some very enjoyable World Cup matches.

The new LP from Half Man Half Biscuit is titled “No-one Cares About Your Creative Hub So Get Your Fuckin’ Hedge Cut”…that’s a good start. It’s over 30 years now since the first 2 albums by HMHB were at the front of the stack & at #1 in the UK Indie chart. On “Back in the DHSS” (1985) & “Back Again…” (1987) Nigel Blackwell’s lugubrious commentaries on British popular culture matched to a spirited bit of Punk Rock were wry relief from the dole-drums of Thatcher’s Britain. Playing in the band got the boys away from daytime TV & declining to appear on “The Tube” because of a previous Friday night appointment with Tranmere Rovers confirmed that they walked it like they talked it. Maybe, just maybe, references to Fred Titmus, Nerys Hughes, Bob Todd (“99% of Gargoyles Look Like…”) & Len Ganley didn’t mean much outside of the UK but HMHB were making the most pertinent funny music sice the Bonzo Dog Doo Dah Band. Which of us here have not often called the mind the opening lines of “Dickie Davies’ Eyes”, “Mention The Lord Of The Rings just once more & I’ll more than likely kill you”. That’s so right.

The band still has a big enough following to play plenty of gigs & subsequent records have come to my attention when the band has been discovered by those younger than myself. There are always good songs & it’s not only “Restless Legs”, “Joy Division Oven Gloves” & “National Shite Day” (“There’s a man with a mullet going mad with a mallet in Millets”) that’s made Nigel a bit of a national treasure. On “No-one cares…” he’s still piercingly accurate about pretension, going on about football, “Swerving the Checkatrade”, “Knobheads on Quiz Shows” is self-explanatory. There are even a couple of  more poignant songs about ageing & loss. Great titles, better lyrics, British Folk Pop Punk, they do that better than anyone. 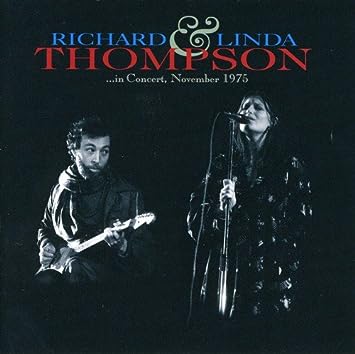 One of my favourite recent purchases (alongside a rather fine Popeye the Sailorman tee-shirt) is “In Concert, November 1975” by Richard & Linda Thompson. I can’t remember why I missed out on this tour because I loved the first 2 records by this pair & “Pour Down Like Silver”, the new album at the time, has become the one I play the most from an outstanding, enduring body of work. In 2007, 25 years after the Thompson’s professional & romantic separation, Island Records finally released this gem from a couple at the top of their game backed by an all-star band. 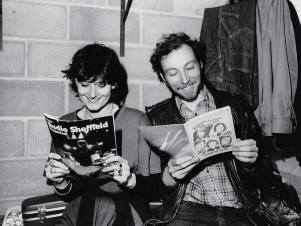 There are plenty of Richard & Linda classics, the extended versions of “Night Comes In” & “Calvary Cross” (all 14 minutes!) are even better than the studio versions. There are cover versions, Hank Williams, Buck Owens, Ricky Nelson, reflecting Richard’s interest in American Country as well as British Folk music. “Now Be Thankful” first appeared on “Full House”, the final LP Richard made with Fairport Convention. On that fine record it’s sung by co-writer Dave Swarbrick. I’m an enthusiast of Fairport’s work, I know (& so do you) that Sandy Denny is one of the great vocalists but when Linda sings & Richard plays resistance is futile. I just kick back & enjoy some of the most beautiful, emotional music that I am aware of. This spectacular rendition took my breath away, touched my heart & opened my wallet.

The weather’s been great here this past week, how about you? Time to dig out the past feelgood hits of the Summer to be enjoyed sitting outside with a cold beverage, a refreshing bit of green & good conversation. There’s been, of course, plenty of Reggae, Marvin & Tammi’s “United” always hits the spot & every Summer, however fleeting, since 2010 “One Fast Move or I’m Gone: Kerouac’s Big Sur” has been a fine accompaniment to warm evenings. Ben Gibbard (Death Cab for Cutie, Postal Service) & Jay Farrar (Uncle Tupelo, Son Volt) didn’t seem to the most likely pairing, brought together by a mutual respect for Jack Kerouac & producing an album of, mainly Farrar’s, songs. This is not Beat poetry & anyway I’m more a Steinbeck man myself, it’s a fine collection of modern Country Rock, a fresh take on the music I’ve enjoyed since the late 1960’s.

Right, I’m away to order a Gareth Southgate waistcoat from Amazon. Happy Birthday to the blog & bring on Sweden!