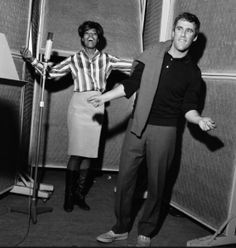 Young Dionne Warwick from New Jersey had a pretty good year in 1963. In January her first solo single for Scepter Records,  “Don’t Make Me Over” hit the US Top 20. Songwriting duo Burt Bacharach & Hal David had hired Dionne to provide vocals on the demos of their songs. They had previous success separately & together but still needed to hawk their wares around New York. Ms Warwick did such a great job for the team that she was signed for their production company & they committed to recording the new songs with her. In December 1963 her new single “Anyone Who Had A Heart” was on the charts with a bullet, heading towards the Top 10. The same morning session had also produced “Walk On By” & well, we all know how that goes.

This wonderful 30 minute clip captures a performance by the new 23 year old hit maker. After her first success Dionne had left her studies at Hartt College of Music in Connecticut to travel to France. The Bacharach connection found Marlene Dietrich (Burt had been her arranger/accompanist) introducing her at the Olympia, Paris & she was a sensation. On Dionne’s return to Europe in 1964 she was filmed at the small 27 Club in Knokke, a Belgian seaside resort. Simply shot & choreographed the director accentuates the talent & she delivers. This is no supper club schmaltz (though I’m not a big fan of “People who need people”) it’s just the demure Dionne, her songs, her voice & that’s enough. It’s a surprise when she loosens up for Ray Charles’ “What’d I Say” & I love it. 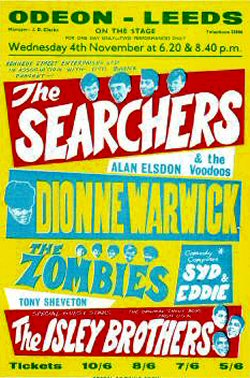 1964 was a peak of the UK music package tour. The Beatles & Mary Wells, the Stones with Inez & Charlie Foxx, Billy J Kramer headlining with the Ronettes & the Yardbirds in support. Dionne shared her October/November bill with the Searchers, the Zombies & the Isley Brothers. Now that sounds like a value-for- money night out. (The “comedy comperes” Syd & Eddie later became fixtures in our tellies as Little & Large. For any international readers, don’t bother, really.) It was during this tour that she joined her producers at Pye Recording Studios to make “The Sensitive Sound of…” album. One of the singles selected from the record is “You Can Have Him” , a stunning remodel of a 1961 Roy Hamilton hit. It has always surprised me that the most R&B of Dionne’s Sixties output, driven by staccato drums & impassioned backing vocals, was recorded with London sessioneers & not the usual New York crew.

Sometime near the end of the 20th century I was working in Putney, South London & across the road was a second hand record shop. It was the perfect place for a music freak like me to spend a lunch hour buying too many albums. There was a chance that the copies of “Dionne Warwick’s Golden Hits Part 1 & 2”, released in 1967 & 69 respectively, could be a little scratchy but they were US copies, on the Scepter label, & were a complete collection of those great singles. I was on a “easy listening” tip at the time, inspired by an old beaten-up Bacharach album I had found on the local market. These records, which turned out to be unplayed, turned our house into warmer but cooler home.

“You’ll Never Get To Heaven (If You Break My Heart)” was the 1964 follow up to “Walk On By”. That year Dionne was Cashbox’s Best Selling Female Artist & this song was a bigger hit in the UK than in the US. The clip is taken from 1966, part of her 5 week engagement back at the Olympia as a guest on the Sacha Distel Show. Two years on & she is an international star, a confident, sophisticated talent recognised as the premier interpreter of Bacharach & David’s songs. She’s assured enough to add her own flourishes to this song, one of my favourites, & her perfectly pitched performance can still give me goosebumps.

Burt Bacharach’s compositions employed unusual time changes to surround & support Hal David’s mature lyrics. As an arranger, he sat pianist Paul Griffin next to drummer Gary Chester in the studio & together they found the fluid, graceful interior logic of the music. This was not the usual “moon in June” Brill Building teen-pop knock off. This was a refined, urbane progression for the popular song & in Dionne Warwick the pair found the perfect foil. Dionne emotional Gospel roots were smoothed by an almost Jazz, almost cabaret feel. She became a modern Pop star making a new, a little more experienced, Pop music.

There’s not room here for all of the classic records that kept Ms Warwick on the charts through the decade & became the foundation of such an enduring & successful career. “Walk On By”, “I Say A Little Prayer” & “I’ll Never Fall In Love Again” all deserve attention. I shock myself that I have the front to leave out the perfect “Do You Know The Way To San Jose?”. It’s another personal favourite that makes the cut, another clip recorded in France where they really got her. Dionne delivers the charming “Are You There (With Another Girl)” (1965) casual in sweater & slacks, the epitome of chic which is, I believe, a French word. “Je ne sais quoi”, that’s more French but I think we knew exactly what Dionne Warwick had.