TThis short clip, just 50 seconds long, is all we have of one of the great, if not the greatest Southern Soul singers in his prime. It’s from 1966 & “Love Attack” was the follow-up to a Top 10 R&B hit “You Got My Mind Messed Up”. James Carr’s rich, powerful, emotional voice was gaining him comparison with Otis Redding, the new shooting star of Soul. James’ star never took the same trajectory. It could’ve, maybe should’ve but that was not the way it turned out to be.

In 1964 a couple of Memphis store owners, Quinton Claunch & Doc Russell, started Goldwax Records. Claunch was a music guy, a guitarist, a songwriter then a partner in Hi Records. He was looking to record some of the talent drawn to the city by the success of the Stax label. Late one night he was called on by two singers with Gospel backgrounds, forgotten groups with great names…the Redemption Harmonizers,  Sunset Travelers, Harmony Echoes. Their companion, Roosevelt Jamison, had a song “That’s How Strong My Love Is” & O.V. Wright made it a Soul classic, later covered by Otis & the Rolling Stones. Unfortunately O.V. had signed an earlier contract with someone else which meant that he was off the label. It was the other equally talented caller, James Carr, who Goldwax hoped would become their new star.

Of the 14 singles released by James between 1965 & 1969 only two made the R&B Top 10 & none had significant impact on the pop charts. These 28 tracks, collected on “The Complete Goldwax Singles” make a wonderful thing. If this music fits right in with the prevailing energy & creativity of the contemporary Memphis scene it’s probably because many of the same musicians were sitting in on the sessions. Those Memphis Boys sure could play but a James Carr record is dominated by the guy singing the Blues not the band. The breakout “You Got My Mind…” was the 4th release, “Love Attack” was followed by “Pouring Water on a Drowning Man”, a great song by two guys who seem to have written nothing else, then by “The Dark End of the Street”. This much covered, though never bettered, instant classic was from the brief collaboration between Dan Penn & Chips Moman out of American Sound Studio. Moman had produced earlier Goldwax records for a bottle of whiskey & a couple of pills. With “Dark End…” he was getting paid & proving to be worth it. The impeccable “These Ain’t Raindrops”, a Quinton Claunch composition, was the b-side of Carr’s cover of the Bee Gees’ “To Love Somebody”. Quality control was pretty high at the studio.

James was not the easiest of individuals to deal with. Roosevelt Jamison was around in the early days to help with personal affairs such as depression & a growing dependency on drink & drugs, as well as any business problems arising from James’ illiteracy. Other agents & managers offered more opportunity when a friend from the old days could have been more helpful. Singers with less emotional range, Percy Sledge, Eddie Floyd, Arthur Conley, found that one song that put them high on the charts while James Carr never did. He had a rare talent but was ill-suited to the life of a touring artist.

“She’s Better Than You”, another b-side, was written by O.B. McClinton, on the staff at the label as a writer & singer. Goldwax had minor hits with the Ovations & Spencer Wiggins but James was their great hope. As problems increased with the star, he would sit silently for hours in the studio before performing, differences between the owners led to Goldwax being dissolved in 1969. The only two LPs they had released were both by James.

There was a single recorded in Mississippi & released by Atlantic in 1971 but that was it from James for 20 years. His mental health problems worsened, periods of hospitalisation followed while Jamison did what he could to help his friend. In 1979 there was a tour of Japan where a stressed James took a double dose of anti-depressants & froze onstage. The first collection of his A-sides came around in 1987 with the tagline “the World’s Greatest Soul Singer”. Soul fans like myself, kids in the 1960’s, caught up in the explosive excitement of Otis, Aretha & the wicked Pickett, were older now, able to appreciate the depth of feeling & experience that James brought to his music. He was rarely seen & not in great shape but his reputation continued to grow. 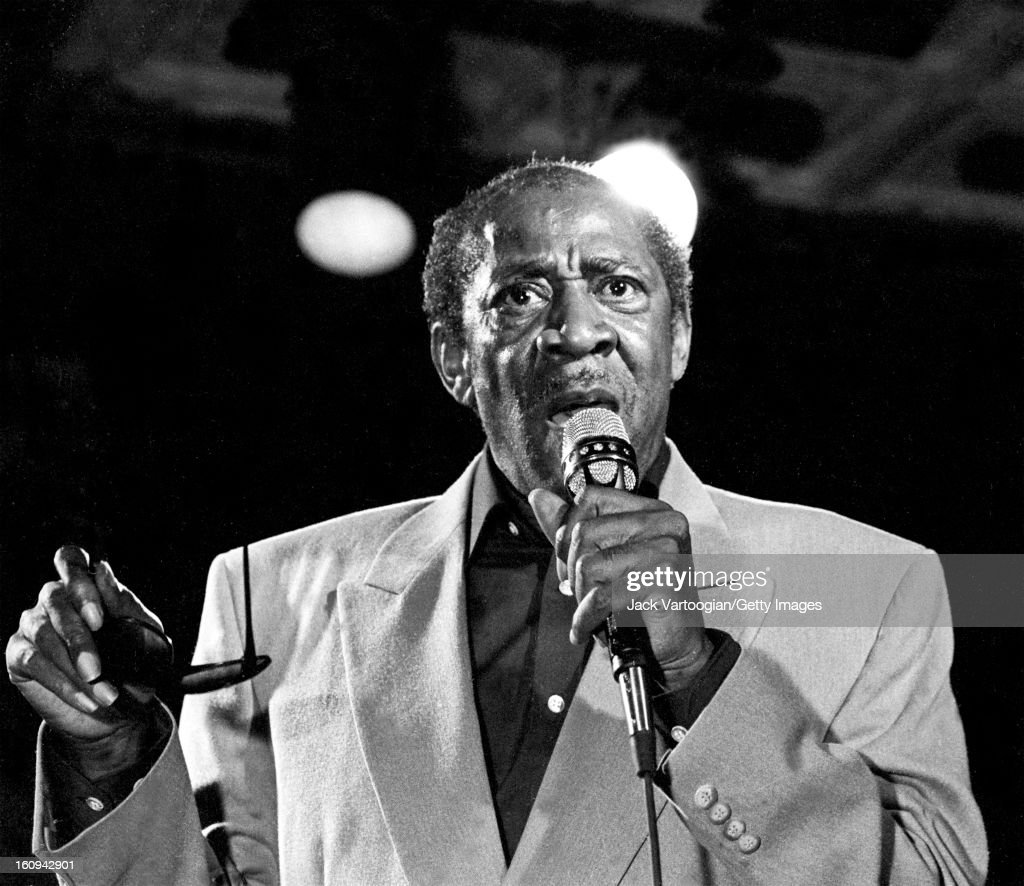 In 1991 Goldwax was revived & James made a comeback LP produced by Roosevelt Jamison. Then, a year later at the Porretta Soul Festival in Italy an unassuming old man with staring eyes was introduced as James Carr. He looked nothing like the handsome, pompadoured singer from 1966 but, from the opening notes of  “Lovable Girl” you knew who this was & that you were in for a very rare treat. The casually dressed all-star backing band includes the Memphis Horns with Andrew Love & Wayne Jackson, on guitar is Teenie Hodges, mainstay of the many great records made at Willie Mitchell’s Hi studios. James’ voice was not what it was, this is 35 years later but he is in control of his instrument, knows what he can still do & how to turn up the power. Maybe it’s because there are no clips of a younger James singing “Dark End…” that I keep returning to this version of “You Got My Mind Messed Up”. The singer himself seems to know that he’s delivered & his take on “drops mic & leave” at the end is just brilliant.

James Carr died in a Memphis nursing home in June in 2001 aged 58. Did he ever gain the recognition & reputation that his work deserved ? I don’t worry about that. I do know that when I want to hear a great collection of mature Memphis Soul from the 1960’s then I reach for “The Complete Goldwax Singles”.

In 1979 Ry Cooder had more commercial success than he usually had with his solo LPs with the release of “Bop Till You Drop”. This was the first digitally recorded Lp in popular music. The resulting vinyl pinged out at you clearly and brightly. You would play the LP in company & people would want to know what they were listening to. It made a good impression. Over the next few years Ry released 3 more solo albums of well produced, exquisitely played, quite mainstream music. He was never the most prolific of writers and had a music fan’s eye for a classic tune. Here is one he chose to cover.

“That’s The way Loved Turned Out For Me” is from “The Slide Area” (1982). The LP is not his best work. If you are going to cover songs like Curtis Mayfield’s “Gypsy Woman” and Carl Perkins’ “Blue Suede Shoes” then you are not going to make the same impact as the originals however well produced or played. This song though became a big personal favourite. It takes it’s time,there’s a lovely restraint about the song. Ry was assembling an impressive touring band at this time. The backing vocals of Bobby King & Terry Evans were a welcome addition to his recordings and his live show.The use of strings is rare for Cooder but suit the slow build of a song of lost love. To praise the guitar solo is like saying you like to breathe…it’s Ry Cooder ! The 90 second play out is hardly the big soul pleading finish but it raises the pace just enough. The ending is not long enough for me.

I knew that this was not an original song but the writing credits included Ry’s name alongside Quentin Claunch & David Hall. I knew Claunch was closely involved with Goldwax records in the 60s. Nowadays Mr Google sorts out these little mysteries for you. In the 1980s a little more investigation was needed. This is the original version of the song.

What a classic slab of Memphis soul. The almost gospel pleading of the vocal. The guitar, organ & brass section which had made the Memphis sound the only rival to Motown in popular black music of the late 60s. James Carr produced a run of outstanding singles for Goldwax. His most enduring song was “Dark End of the Street” the Dan Penn/Chips Moman song. “Dark End” was written for Carr (in Quentin Claunch’s hotel room) and has been recorded by many different artists. “That’s the Way” was the B-side of the 1969 single “Freedom Train”. Carr suffered from bipolar disorder which gave him a reputation as a difficult man to work with. His personal problems worsened in the early 70s and he stopped recording. If you can obtain a collection of his work for Goldwax you will hear that James possessed one of the great soul voices.

Ry Cooder changed the song completely. He kept the first verse and made it the third one, writing completely new ones to precede it. He ditched the rest of the original lyrics too. Is this taking liberties with a song ? I don’t think so. Ry’s voice & the tone of his music would not suit such an emotional soul vocal. He did, however, love soul music & knew a good song when he heard it. What we have here is two versions of a song which are very different,musically & lyrically, & which are both fine examples of each artist’s work. I don’t have to prefer one over the other I think they are both very good songs.