While giving myself twisted blood trying to get it right about the Temptations in just 1000 words & 3 video clips (I like a challenge…soon come) I was reminded of some memorable cover versions of their work by a wide variety of artists from rock, soul & reggae. So here are just 3 of those…OK there are 4…I do what I can.

Oh Yeah ! The wonderful Faces from 1971 crashing their way through a show-stopping take on “I’m Losing You”, the Norman Whitfield/Edward Holland Jr/Cornelius Grant song released by the Temptations in 1966. 1971 was a big year for the group. It started with the release of their 2nd LP “Long Player” & there was another to follow in November when “A Nod’s As Good As A Wink” came around. With the Beatles done, the Stones, the Who & Led Zeppelin gone global, Faces became the best rock & roll band in Britain. Formed when Rod Stewart & Ronnie Wood off of the Jeff Beck Group joined the 3 remaining Small Faces to replace Steve Marriott, these 2 records fused their energy, humour & talent, blending bluesy good-time rock with Ronnie Lane’s more considered compositions.

However, the record everyone bought in the summer of 1971 was “Every Picture Tells A Story”, Rod Stewart’s 3rd solo LP. He had joined Faces with his own contract already in his back pocket. The 3 solo records are a mix of his own songs with very well chosen cover versions. “Every Picture…” & the single Maggie May” were #1 hits around the world & Rod became a very big name indeed. So, the hard-edged “I’m Losing You”, his first Motown cover, recorded by all of the band & performed in their set, was released under the singer’s name. In the US they found themselves billed as Rod Stewart & the Faces which must have affected the rest of the band. There was to be just one more LP from the group while Rod released 2 more. Ronnie left & in 1975 Stewart hooked up with Britt Ekland…I don’t want to talk about it.

Over in Jamaica, where vocal groups were always a thing, the Temptations were regarded as a close second to the sweet gospel-soul of the Impressions. Local musicians regularly covered the Motown hits. The move from Detroit to Kingston inspired a lovely alchemy, imagination & inventiveness adding shine to material that was already golden. Trojan Records’ 3 CD collection “Motor City Reggae” is a Who’s Who of Sixties & early Seventies Jamaican music. Back then JA produced singers like they now roll out world class sprinters. Slim Smith is included in Trojan’s treasure trove though his cover of “Ain’t Too Proud To Beg”, an absolute delight, isn’t. How the heck did the band come up with that bouncing rhythm, the loping bass ? It’s original, irresistible & I love it. I’m thinking that we are hearing the Soul Syndicate, from Greenwich Farm, with bass player George Fulwood. That’s some group.

Slim sang with the Techniques & the Uniques before starting a solo career. His sweet, passionate vocals proved to be very popular but Slim suffered with mental health problems & entered a sanitorium in 1972. The next year he cut his arm when he broke a window of his parents’ house & bled to death aged just 25. Slim is remembered for more than his sad passing, he was one of the finest singers in a very crowded Jamaican field. Check him out. In 1971 toaster Hugh Roy (that would be U Roy, “The Originator”) & producer Bunny Lee took Smith’s song & came up with “Love I Bring”, a great song, a superior mix of singer & DJ & a bonus version. It’s quite a way from the Temptations’ original & I include it here, in all its scratchy glory, for Danny McCahon who I know is partial to this sort of thing. 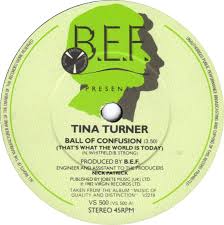 Heaven 17 were formed after the bifurcation of the Human League in 1980. While still committed to the Man/Machine electro-pop they still loved the funk. The 1981 debut LP “Penthouse & Pavement”, a classic prescient satire on a corporate culture which was rearing its ugly head, opened with their own Norman Whitfield inspired Motown Manifesto, the hectic “(We Don’t Need This) Fascist Groove Thang”. Their own enterprise ran parallel with the production company British Electric Foundation who, in 1982, released “Music of Quality & Distinction Volume 1”. It’s a odd mix of great pop songs, former pop stars & Billy McKenzie. Once you recover from Gary Glitter’s platform-booted stomp through Elvis’ “Suspicious Minds” there’s an LP that does what it says on the sleeve. The lead track is the Temptations track “Ball of Confusion”, initially meant for James Brown who asked for too much money & was replaced by Tina Turner.

Since her split with Ike in 1976 Tina had done little of note (She was the “Acid Queen” in the 1975 movie of “Tommy). Her tour may have been called “The Wild Lady of Rock” but Tina was on the chicken-in-a-basket cabaret oldies circuit. “Ball of Confusion” was noticed by Capitol Records who offered her a new deal. In November 1983 her cover of Al Green’s “Let’s Stay Together” put her back on the charts then the LP “Private Dancer” took her to the Thunderdome & a decade of platinum records. “Let’s Stay Together” was another B.E.F. production. Whatever your opinion on Rock & Soul’s favourite granny she was skillfully managed, recorded & promoted. I’ve always thought that not enough credit came the way of Heaven 17 for bringing Tina bang up to date & putting her back in the frame.