In April 1966 the Rolling Stones released “Aftermath”, their 4th (well, in the UK anyway) LP, a marked departure from the previous three in that all 14 tracks were composed by Mick Jagger & Keith Richards. The repertoire of every British Beat Boom group was a mix of Rock & Roll & R&B favourites, often new US songs were quickly covered & became bigger hits than the original on both sides of the Atlantic. After a couple of years this was a little played out & a second wave of groups (the Kinks, the Who) included talents who, like Lennon & McCartney, wrote their own songs. “Aftermath” came between “19th Nervous Breakdown” & “Paint It Black”, self-penned smashes. Now there were these fresh potential hits. Just like new LP’s by those Beatles & that Bob Dylan there was a queue, a long one, to cover these songs.

Chris Farlowe had an inside line to the new songs by Mick & Keith. In 1965 the singer signed to the new Immediate record label founded by Andrew Loog Oldham, the publicist-turned-Stones manager, by their side in the rapid elevation from “England’s Newest Hitmakers” to one of the biggest groups in the world. Farlowe’s version of “Think” was released as a single in January 1966, four months before “Aftermath”. Produced by Oldham, Jagger & Richards & isn’t that the Stones’ singer on the closing backing vocals, Farlowe’s strong mature voice set off with a brassy, sassy, Soul arrangement. There’s no doubt that Chris had one of the most distinct voices around but his debut LP,  “14 Things to Think About”, is a little heavy on big ballads that had been done better elsewhere rather than the bluesy Soul to which he was more suited. “Think” made the Top 40 in the UK, next time around another “Aftermath” cover & he hit big. 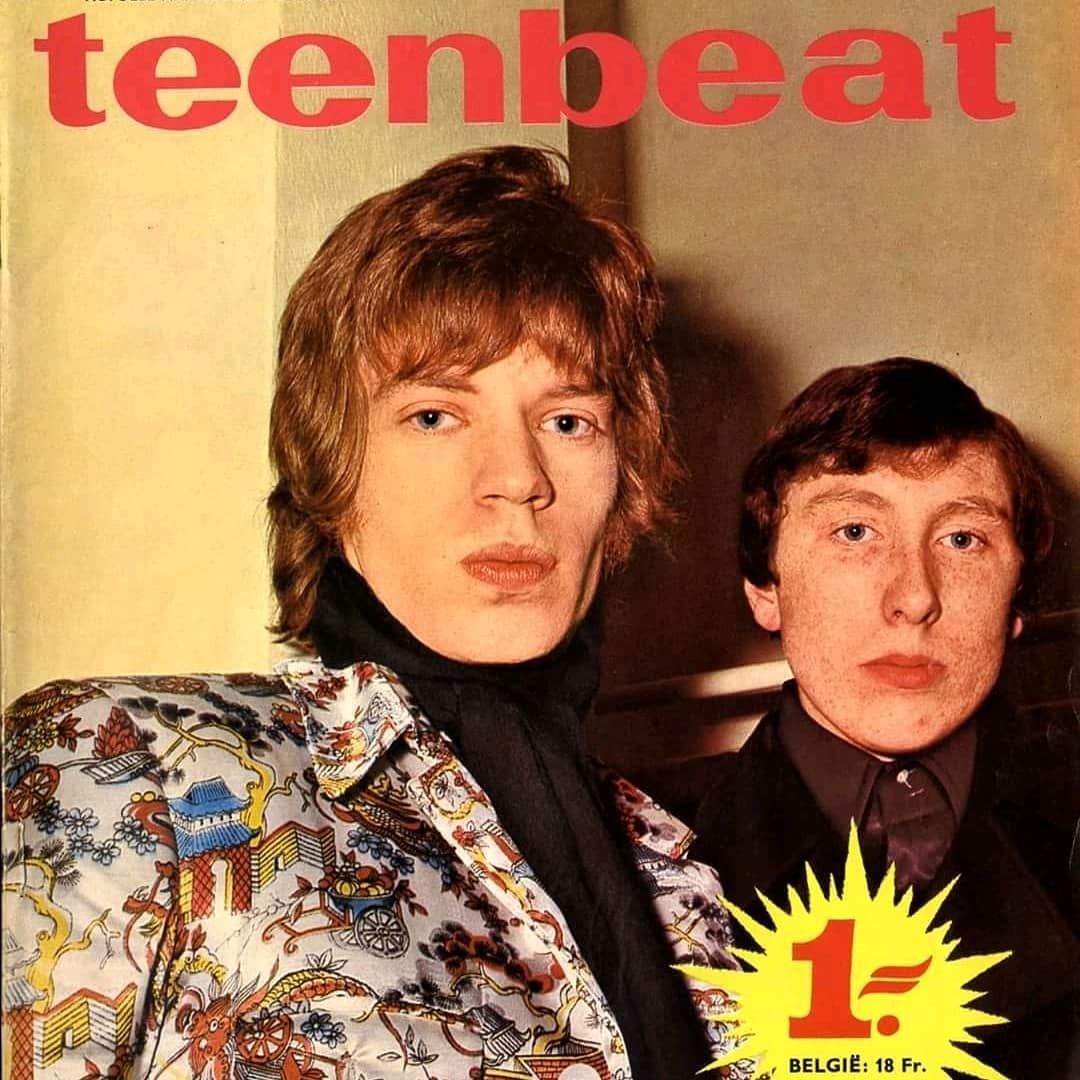 “Out of Time” is one of the strongest tracks on “Aftermath”, Brian’s light, imaginative marimba introduction leading into Mick’s restrained vocal & an instantly memorable chorus. Chris, produced by Jagger, gave it the Big Beat treatment & made the UK #1 spot in July 1966. It was perhaps an over reliance on the Stones connection, an easy option, that prevented Farlowe consolidating such a success. There were three more 45’s by Jagger-Richards, “Ride On Baby”, “Yesterday’s Papers” & “Paint It Black” which all missed the Top 30. He got first crack at Mike d’Abo’s “Handbags & Gladrags”, a great song which sure sounded like a hit but wasn’t. When Immediate folded in 1970 he became a voice for hire with Prog bands Colosseum & Atomic Rooster. In 1966 groups performing original material was the thing, that’s why the Stones moved away from the R&B covers. British singers like Joe Cocker & Rod Stewart were appreciated for their individual interpretations of discerningly selected material. This came a little too late for Chris Farlowe.

Time was when the Searchers were bigger than the Stones. After an apprenticeship which, like the Beatles, included a residency at the Star Club in Hamburg, they were caught up in the Mersey Mania &, under the guidance of producer Tony Hatch at Pye Records, 3 of their first 4 singles were UK #1 hits (the 4th “Sugar & Spice” was only #2). The departure of bassist Tony Jackson, lead vocals on the earliest hits, had no real effect & with 3 US Top 20 songs in 1964 the group were part of the British Invasion. Their harmonies & John McNally’s 12-string jangle were an influence on the upcoming Folk Rockers. “When You Walk in the Room” was a perfect Pop record & there were a few of those around in 1964. A dependence on other people’s songs in an industry where you were as only as good as your last record meant that it was difficult to keep up. After 1965’s “Goodbye My Love” the Searchers were no longer hitting the UK Top 10 & when drummer/harmoniser Chris Curtis, on & off stage a strong personality, left the group they lost a little individuality. They were looking for more modern material but covering a Stones song was still a little surprising. “Take It or Leave It”, gentler than the original & pleasant enough, just failed to reach the UK Top 30. Subsequent singles, in a variety of styles, made less impression & the Searchers were finding gigs on the cabaret circuit. Later these progenitors of Power Pop found a new, deserved lease of life with Sire Records. I caught a show of theirs in the early 80’s before an appreciative young audience. They did all the old hits, “Needles & Pins” was demanded twice, an evening of melodic Mersey Beat was thoroughly enjoyed by all. 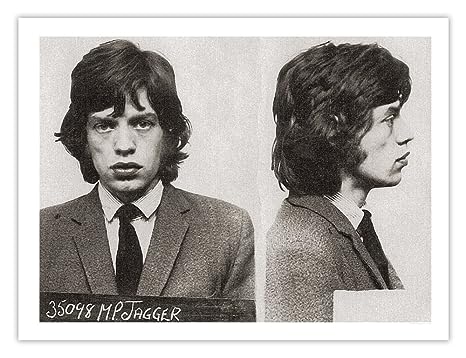 “Would you let your daughter marry a Rolling Stone?”. Andrew Loog Oldham’s Situationist mischief positioned the group as the evil twins of the Beatles. Long hair, being rude to journalists & peeing in public was rebellious enough but the band’s recreational drug use made them a target for the Sunday tabloids & Scotland Yard. After a raid in February 1967 the following June Mick & Keith were sentenced to 3 months & a year in prison respectively. Meanwhile Brian had been charged with possession in May. The Who, prompted by Pete Townshend, pledged their support by rush-releasing a double A-side of Jagger-Richards songs, the first, they said, of a monthly series for as long as the pair faced doing time.

“Under My Thumb”, possibly the most misogynistic of the “Aftermath” songs (there’s a few but the Stones disliked everybody not just women) was covered first by Wayne Gibson, a favourite in the Soul clubs up North & finally a hit in 1974. In the US rock & roller Del Shannon made a pretty good stab at it. Released on June 30th 1967 the Who’s version is a rush propelled by Keith Moon’s drums while, with bassist John Entwistle away on honeymoon, Pete plays everything else including those great stabs of fuzz guitar. The single, coupled with “The Last Time” was both the first & last in the series as in July Keith’s conviction was overturned & Mick given a conditional discharge. Still, it’s the thought that counts & it was a pretty great thought.

OK, there’s room for one more & this is from 1979, hardly jumping on the Stones bandwagon but my what a track. Ellen Foley had duetted with someone called Meatloaf on “Paradise By the Dashboard Light” from something called “Bat Out of Hell” which I believe was quite a big deal. Like many attractive, intelligent American women she was an Anglophile & chose two experienced British musicians to produce her debut LP “Night Out”. Ian Hunter & Mick Ronson were touring & recording together after leaving successful bands, Mott the Hoople & the Spiders From Mars respectively, & they did a fine job. 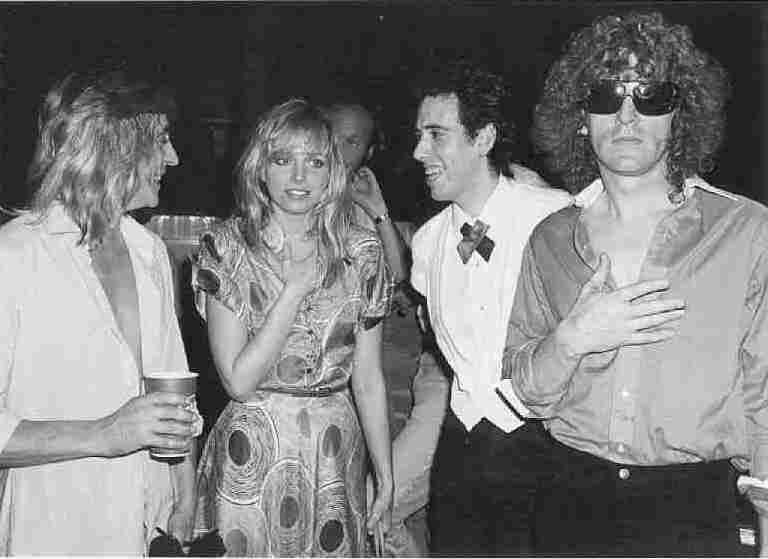 Mick Ronson (that’s the great…) was no stranger to a crunchy Keith Richards riff,  there’s  “Rebel Rebel”, “Jean Genie” & that’s just a start. “Stupid Girl” is a full-on Glam assault & it’s great to hear. In fact Ronno’s guitar flourishes & perfect solos allied to Hunter’s attachment to a bit of Rock & Roll drama makes for a most listenable album. Ellen became romantically involved with Mick Jones off of the Clash & on “Spirit of St Louis” (1981), recorded after “Sandanista”, she was backed by the band. With 6 Strummer/Jones songs included that’s definitely one to check out.

My new friend & fellow blogger Mr Dave StrangeWorld loves the early music of the Rolling Stones & he likes his 80s rock chicks. So, I hope that this combination of the two is to his liking.

Ellen Foley’s first turn around was on a duet with Meatloaf. For the next few years all the moves she made were a lot cooler than that. “Stupid Girl” is a cover from her first LP “Night Out” (1979) & it’s a spirited charge at the Stones’ song. It’s a pity that the studio band were not playing with her because the sight of Ian Hunter & Mick Ronson, who produced the record, crunching into a Stones riff would be just the ticket. Any chance to hear Ronson play the guitar is one to be taken &, to be honest, is the most interesting thing about this LP.

For Ellen’s next LP “Spirit of St Louis” (1981) her then boyfriend, Mick Jones off of the Clash, took over the production. It is the lost Clash record, the band played on all the tracks & there are 5 Strummer – Jones songs on there. Again that reads better than it sounds but there will be no more Clash LPs so it is worth checking out. Ms Foley tried a little too hard to make it & she never found her own space. Her 3rd, & final record was made back in the USA with Vini Poncia, the man who bore some responsibility for prolonging the career of Kiss. I suppose that after “Sandanista”-era Clash the only way is down.

After that double whammy I will try for the triple. You can reach the Dave’sStrangeWorld blog by hitting the link on my “blogs I follow” list. There you will also find the Pop Goes That Crunch ! blog. Dave & Pop are both admirers of  Alex Chilton, a teenage pop star singer with the mighty Box Tops before forming Big Star, a band that made a wonderful noise that few people bought. Between these two groups Alex hung around Memphis recording studios & experimented with different voices, different sounds. He was still only 19 but had been burned enough by the music business to be cynical beyond his years. These tracks, cut in 1970, were not released until 1996. Some are wryly humorous (“I Want To Meet Elvis”), on others he is drunk (a cover of the Beatles “I’m So Tired”) & then there is “Jumping Jack Flash”.

This is the Big Star sound he was looking for. A combination of drive & melody which evokes the best of 60s British rock but has its own thing going on. The fluidity of Chilton’s guitar work is a thing of beauty & this cover, like the best of the band’s work, makes you go “Oh Boy! This is how it is done”. Every rock music writer ever has said their piece about Big Star. All I want to add is that halfway through their classic songs you go, Whoa ! if only all music was this good. My favourite Stones cover I think.

Chris Farlowe was one of Andrew Loog Oldham’s first signings to his Immediate label. Of the 11 singles he released 5 were Jagger – Richards songs. A driving soul version of “Think”, where Mick can be heard on backing vocals, got his face known before “Out of Time” gave him a UK #1 hit. He was getting first shot at these songs, in some cases releasing them before the Stones versions. Oldham & Jagger were producing his records & he seemed well set. “Ride On Baby” was the follow up to “Out of Time” & it just missed the Top 30. There were some quality singles to follow but it was the groups that carried the swing in 1967. Chris hooked up with Colosseum & Atomic Rooster as a voice-for-hire on the prog-rock scene, he is still around & as leather-lunged as ever.

There are some great Stones covers, Alex Chilton, Merry Clayton’s “Gimme Shelter”, Ike & Tina’s “Honky Tonk Women”. There are the poor ones, Melanie’s “Ruby Tuesday”, Melanie’s “As Tears Go By”. Then there is the catastrophe that is “Wild Horses” by Susan Boyle. These are just 3 random covers of early Stones songs that I hope my new American music-loving friends will enjoy.