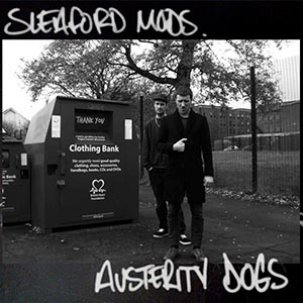 The Sleaford Mods are releasing some new music this week. 2013’s “Austerity Dogs” made a big impression, possibly the biggest of any of last year’s records. A collection of snarling, choleric slices of life in the bus lane, an emphatic voice from my side of town. The underclass created by Thatcherite scorched-earth  industrial policies have been around for a generation now. We are expendable, an embarrassment, abandoned by Blair’s New Labour who pursued the votes of the aspirant & the affluent. Now we are, apparently, to blame for all that money being too tight to mention hoo-ha. Capitalism’s safety valve, social mobility, has been shown to be a terminological inexactitude. The ladder has been pulled up &  the safety net of the Welfare State is being dismantled. Times are tough. When I listen to the Sleaford Mods I hear a voice that is not often heard…& about fucking time.

The Mods are from Nottingham (Nottz), the legatees of  a fine tradition of Social Realism. Alan Sillitoe’s novels captured young working-class heroes as the fifties became the sixties. The films of Shane Meadows collar the towns that time forgot, youth who are not sure what they want, less sure how to get it. The Sleaford Mods roll with the same lack of compromise, hitting their targets just as accurately. Round here they say what they like & they like what they say. Protest songs, remember them ?

“Tied Up In Nottz” is the first video from the new record “Divide & Exit”. “People’s poetry on public transport.” (Thank you Danny McCahon).

Jason Williamson does the rhymes, Andrew Fearn creates the beats. The pair are obviously not on a gap year before returning to education. Man, those hapless hipster Hugos have almost killed British music. These two have been around a little longer, have more to say for themselves. When you have done your time on the production line of the local chicken factory. (2 shifts, 2 months, 2 years, everyone has their limit). When the Jobcentre has got you jumping through hoops but you are biting it because one wrong word  your benefits are stopped & the bureaucracy becomes a proper mindfuck, then you have stories to tell, things that need saying. Your sense of self, of your place in the world needs a little more nourishment than that provided by the crumbs from the tables of the bosses & the politicians. The Sleaford Mods are a masculine voice that knows life in low-income England is a bitch, ain’t no mistaking it, just don’t expect them to be happy about it.

In post-industrial Britain the manufacturing industries, offering jobs for life, have disappeared, supplanted by zero-hour contract, minimum wage McJobs. If you are unlucky enough to be unemployed, sick or disabled then watch your back. The Tory government only needs the slightest excuse to set its pitbulls on to you. Their running dog lackeys in the media produce “poverty porn”, an exploitation & demonization of  that part of society denied access to the only thing that matters…money. “Skint”, a tawdry low in sub-standard TV, was filmed just a mile away from my home. I could be a tour guide on a “squalor safari”. Cheap holidays in other people’s misery. I could…I won’t.

The Sleaford Mods testify about life on these estates, cheap booze from the corner shop, “the bus stop’s a youth club”, steroidal skunk grown in somebody’s spare bedroom. Cocaine (chisel) stepped on so hard that it has only the vaguest memory of  having ever been in Colombia. Whatever the intoxication you choose, it maybe doesn’t always make a bad situation better. (Huh ! Get me !). “Whad’ya think I’m gonna sing abaht…my endless love ? Fucking freak” (Armitage Shanks). When he gets it right, as in “Some Of These Plants Are Burnt “, it’s a rough diamond low-life vignette of the illegal, drug-driven, black economy. “I could mek a small fortune selling the crap on these scissors”…funny… I’ve heard that said.

Both Jason & Alan have served their time in music. They have been in bands, released their tunes under other names. They are now ready to do it right & show little patience, even mercy, for musicians they consider to be time-wasters or bullshitters. “You are not obsessed with music you are obsessed with the idea of being…” you get him. Sleaford Mods are not always sniping from the gutter, there are plenty of sharp observations about popular culture, fashion, haircuts, all that nonsense. Stuff I hear on a Saturday night when we get together for “Match of the Day” except without the New World Order paranoia.

That’s a lot of politics. I don’t want to ignore the quality of the music. “Jobseeker” is included here over some very good alternatives not just because of a brilliant lyric. I’m on double secret probation at my office for saying much the same thing Williamson does here. The  cracking sample of the Yardbirds’ “For Your Love” riff  drives the song along. Alan’s bass-heavy stripped down beats lay a foundation for the words & allows them to be heard. The music bloke does more than press “start” on the laptop, nod along & suck on his e-cig. Vaping…it’s a thing round here…on the bus, in cinemas & pubs, places where smoking is banned…funny.

The last guy to chat this sort of sense was 10 years ago, from the East Midlands too. The acceptable (to me), mucky face of British rap, MC Pitman from

the Leicestershire coalfields, sneering about fat cat wankers, celebrity culture & biscuits. The People’s Poet Laureate, John Cooper Clarke, spits his acerbic, hilarious rhymes with an outsider’s perspective. Jason Williamson is more serious & more angry than both of these men. His snapshots of the moral impoverishment which accompanies economic distress are unadorned reminders that capitalism’s casualties do think about this shit & that sometimes, just sometimes it is only right that this voice is heard. The Sleaford Mods are doing a great job for British hip-hop &, I think, are the best band around. They make me jump about like punk rock is supposed to do. OK, back to it, those plants won’t water themselves.