It is with great pleasure that I am able to include this clip on loosehandlebars, it’s been a while coming & it is certainly worth the wait. We have championed the Gatefolds since their first live gig in March 2013. Not only because my friend Joe Brown is the bass player but also because, in the fine tradition of guitar bands out of Derry, Northern Ireland, they made a most acceptable racket. A major highlight of a memory-packed first night in Derry was seeing the band play live. I’m now happy to call all 4 Gatefolds friends, it’s been a pleasure to follow their progress through the videos made by Derry documentarist Jim Cunningham & the receipt of care parcels containing new recordings. Now we have the first professionally shot & edited filming of the band in action & it’s very good indeed. 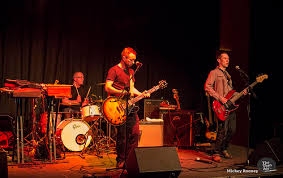 At the end of April I made the 300 mile journey from my home to the Western edge of Europe to experience my second Gatefolds gig. The guys, a proper Garage band, worked hard in drummer Sean’s garage before returning to playing out & it showed. The guitar interplay of Jason & Fergal flows & surges at all the right times, the rhythm section, Joe & Sean, bring it in subtly & bring it home powerfully. It’s the unity, the 4 of them knowing how the Gatefolds should sound, that is the most impressive. I look forward to hearing studio versions of the new songs.

Over at BBC Radio Foyle presenter Stephen McCauley’s “Electric Mainline” show champions independent music & the local scene. He invited the Gatefolds along to play 2 of their tracks & “Disappearing Act” was caught for posterity. My trip to Donegal was totally worth it (I got a tune dedicated to me, thanks guys). Click on the link & you’ll get a taste of the rocking good stuff.

The best way to get the lowdown on a new young band is to ask a real young person. Keeping it in the family Emmet Brown, son of Joe kindly accepted our invitation to join the ‘handlebars’ karass. Emmet is the Antichrist.  (“What ?”…Really ?”…OH !) Strike that, Emmet is an anarchist…phew !

“The word ‘touts’ may have a significantly different meaning in the north than it does most places. Defined as ““someone who betrays a confidence. To squeal, to tell tales, to inform the police of illegal activities”. With a name like that they’re already off to a brave start. With their debut EP “Sickening & Deplorable” its not hard to see where their influences lay. Channeling the power of legends such as the Clash while having the speed of American punks such as early Descendents.
I saw them playing in The Camden Assembly (Formerly the Barfly) in April. I was instantly blown away by their intensity and power. Guitarist and Vocalist Matthew would try to engage with the audience between songs but no one could make out his thick Derry accent. I found this hilarious as I looked around the room at confused faces.
“Saturday Night Scumbag” from their debut EP has to be one of the most fierce and explosive songs to come out of Derry and is exactly what the youth of our city needs. It’s great to see so many young music fans going to gigs and starting bands in Derry. It’s about time!”

I hope that Paddy Nash doesn’t mind me describing him as a stalwart of the Derry music scene as he’s a big man & I’m in bad shape. Way back at the end of the 20th century his group The Whole Tribe Sings made a single “Happy” which was used in a beer commercial, got them gigs in the US & it could have been, even should have been. After a long break Paddy returned with the Happy Enchiladas as his backing band & there are 6 albums of their sparky, Rock-Folk around. I often encounter Paddy’s name & music through his involvement with local musicians & many community-based projects.

This month a solo LP, “Gate Fever” is released. 10 tracks recorded in 6 days it’s a mature collection, sometimes introspective, sometimes retrospective, vignettes & character studies accurately captured. If the songs are a little downbeat well, these are the times we live in & Paddy’s lyrics are studded with warmth, hope & beauty. I feel that I’m listening to an Irish version of John Prine & that’s no bad thing. There’s an interesting video for “We Are The Dead” just up there. If you click here you can listen to “Gate Fever” & buying it is just one more click away.