After leaving university I took a job in a drop forge, banging the crap out of hot metal. That’s what they used to do in the Midlands industrial crucible the Black Country. The place was noisy, dirty & you counted your fingers after every shift but I’d spent my summers working in a noisier, dirtier steel works, I knew the game. The men & women I worked alongside, despite their sometimes impenetrable accent, could not have been more welcoming of an overeducated longhair (that would be me). When Keith heard that I was saving for a proper top of the range stereo system he showed up the next day with some spare gear & insisted that I took it until I was sorted. Keith had 5 years on me, he was married & held a black belt in Karate. He had been a skinhead, a top man in the Wolverhampton Wanderers crew. Before that he was a Mod, a young kid not a Face. His own “Quadrophenia” moment came when he got out of his brain on the 5.15 to Birmingham & joined his tribe to witness a performance by Tamla Motown sensations the Temptations.

For a young, blocked-on-blues Mod around 1968/69 a Temptations concert must have been the epitome of Cool. 5 very sharp dressed men moving in perfect synchronization, delivering hit after perfectly crafted hit, was a very fine musical experience. 20th century American music has a tradition of harmony vocal groups through gospel, blues, jazz, country, rhythm & blues, doo-wop & pop.  The music made by the Temptations defined the new vocal group sound, music that was made 50 years ago but can still be considered modern. The Mills Brothers, The Ink Spots, The Blind Boys of various Southern States, are held in high regard but every male vocal group, boys or men, since the 1960s have aspired to emulate & been compared to the Temptations.

“Beauty Is Only Skin Deep” is the 3rd of 4 singles in 1966 that all became #1 R&B records. Since 1964 the group had been producer/writer Smokey Robinson’s boys. “Beauty…”, their biggest hit since 1964’s “My Girl”, was preceded by “Get Ready”, falsetto lead vocal by Eddie Kendricks, the last of Smokey’s run & by “Ain’t Too Proud To Beg”, a David Ruffin led song produced by Norman Whitfield who was handed the keys to the studio & kept them until 1974. Ruffin had joined in 1964 to complete the “Classic 5” line-up. The other Temptations, Otis Williams, Paul Williams & Melvin Franklin all took their turn as lead on album tracks but it was the double whammy of Ruffin & Kendricks, 2 great soul voices who established the group as Motown’s & the USA’s top vocal group.

The hits just kept on coming but there was trouble ahead. As the Supremes became “Diana Ross & the…” one member of the group imagined that “David Ruffin & the Temptations” was a possibility. David’s growing separation from the others, his erratic behaviour not helped by a taste for cocaine, led to a messy & litigious departure in June 1968. His replacement Dennis Edwards was not sure of his place when Ruffin showed up at the group’s shows & joined them onstage. Eventually there were 2 solo LPs, still on Motown, in 1969 but a completed record was shelved by the label & David Ruffin never became the major star that he should have been.

The lyrics of “You’re My Everything” (1967) were written by Rodger Penzabene, a new, young recruit to Motown. The song honours his wife but he was heart-broken when he discovered she was having an affair. 2 great songs, “I Wish It Would Rain” & “I Could Never Love Another (After Loving You)” came out of this upset, both perfectly interpreted by Ruffin’s anguished vocal, both #1 R&B hits. On New Year’s Eve 1967 Penzabene shot himself & died aged just 23, a poignant footnote in Motown’s history & a tragic end when there was surely so much more to come. 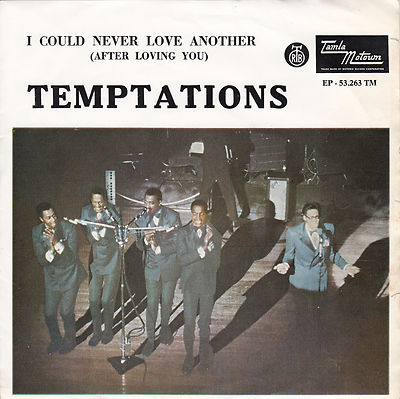 Norman Whitfield began to exercise more control over the group’s material & in 1968 “Cloud Nine” was the first of his innovative “psychedelic soul” experiments to be released. The single was successful but the Temptations were not fully convinced of the move away from their blockbuster ballads to the Sly & the Family Stone-influenced soul underground. They continued to release more mainstream LPs, 2 with Diana Ross & the Supremes, live from prestigious nightclubs in New York & London, even a Christmas record. Whitfield continued to work with the Temptations until 1973 by which time only Otis & Melvin remained from the classic 5. There are some terrific songs, more big hits from this later period…another time. These Ruffin/Kendrick led classics, a greater Motown maturity after the early hits, are the ones that did it for me then & still do.