The first of our guests this year is our live correspondent Steve Pittaway. You know that guy you see at every decent gig in the Midlands…that’s him. Next time you see him say hello & buy him a drink…make it two!

I was asked to write about my top three gigs of the year & I knew what two of them would be. I also knew that they had been reviewed by people who said things about them in far better ways than I could. After careful consideration I realised that some of my favourite live moments of the year had come via support bands, so let’s make 2018 the Year of the Underdogs.

I don’t see every support act at every gig. I can be that guy who leaves the bar 5 minutes before the main act takes the stage & I’m cynical (grumpy?) enough to dismiss openers with “they sound like somebody else who did it so much better”. However, on these three occasions I was impressed enough to want to spread the word about them.

The first of these are The Staves on First Aid Kit’s “Rebel Heart” tour at the O2 Academy in Birmingham on the 7th November. The Staves have been around since 2009, releasing two major label albums. They comprise of three sisters Jessica, Emily and Camilla Staveley–Taylor (no guessing where the band name came from). Labelled as an Indie Folk Trio, they have roots in the folk tradition what really sets them apart is their harmony singing. It seemed brave to open the set with “Hopeless” sung acapella showcasing the quality of their individual & blended voices.

Guitars & keyboards were added for “Next Time, Next Year”, the backing vocals cleverly becoming part of the instrumentation and harmonies once again sweeping you away. “Tired As Fuck”, as the title suggests, hits a little harder, the music more muscular, insistent, hypnotic vocals. The real surprise of the set was their cover version of The Waterboys’ “Whole of the Moon”. I always liked the song, was fortunate enough to see The Waterboys perform it on the “This is the Sea” tour, but over familiarity has lessened its joy for me. The Staves arrangement of it blew me away. The hairs on the back of my neck standing up, you could have heard a pin drop as it stunned the audience into silence. As the song ended someone shouted out “That was amazing”, he wasn’t wrong. Their all too brief set ended with an older song, “Mexico”, from their first album , harmonies once again weaving throughout the song and leaving the crowd well warmed up for the headline act.

Back in Birmingham on December 6th, the O2 Institute this time for Buffalo Tom, five unassuming twenty something lads shuffled on stage grabbed their instruments and began playing a song which could have been written in the late 60’s by a West Coast psych band. The interplay between the three guitarists, alternating lead & rhythm without stepping on each other was instantly attractive. This sounded like it was worth my time. The song finishes,the singer mumbles into the mic. I assume he said what the band were called but I didn’t catch it. Back home the Google informed me that I had been watching Sunstack Jones, already on to their third album, mastered by the Verve’s guitar hero Nick McCabe on the Coral’s Deltasonic label.

This is North West Coast Pop Psych, a Liverpool lysergic crew influenced by Love & the Doors, continuing a tradition reaching back to Echo & the Bunnymen, the Pale Fountains, Teardrop Explodes & others. They played a strong set, a touch of Stones swagger, plenty that was closer to California than Merseyside. High quality melodic songs were complemented by memorable harmonising. They left the stage to well deserved applause but I was left wondering how many people actually knew who they were as they did such a poor job of promoting themselves. They deserve to be heard by a wider audience and are proof that the guitar band isn’t dead yet!

The Near Jazz Experience were the support band that I went to see rather than the headliners, the Nightingales, at the Hare and Hounds in Birmingham on 2nd October. The NJE, have, in existence since 2010, are friends & former bandmates Terry Edwards, seasoned session saxophonist, Mark Bedford, the bassist for hit-makers Madness & Simon Charterton, ex Higsons, on drums. A monthly residency at the Indo in Whitechapel, London progressed from improvised jams into actual songs. In late 2017 they recorded an album & “Afloat” is a very fine piece of work. 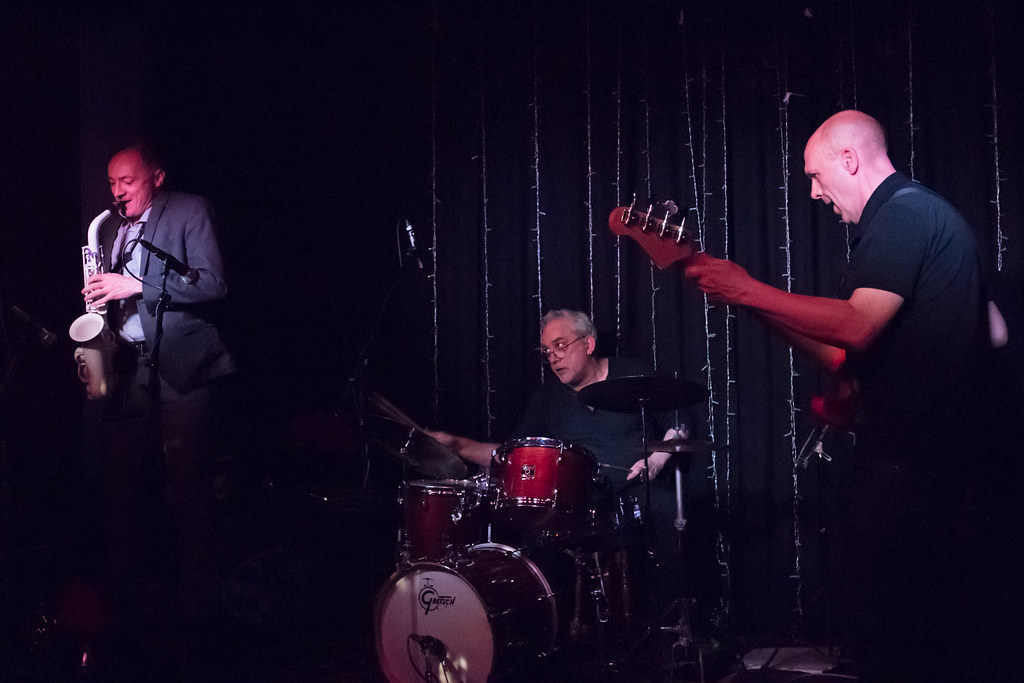 The announcement of NJE’s tour with the Nightingales was a rare opportunity to see the trio play outside of London. one that I couldn’t miss. They hit the stage running with what was their debut single “Knife Edge” the rhythm section locked in, providing space for Terry to let loose with his horn. The song is one funky groove and if it doesn’t make you move then nothing will. Next up is “Two Sax” which is exactly what it says on the tin, Terry weaving his magic on two saxes, one alto and one tenor, at once. The solid backbeat and fluid bass let Terry play the melody line on twin saxes and then switch between them. It has to be seen to be fully appreciate the skill involved. I’m not usually a dancer but this has me moving my feet. Terry addresses the audience to tell us that what the NJE essentially do is play Jazz on rock instruments. They certainly do and what masters they are at it. The set continues and gets more infectious with its balanced rhythms and flowing bass lines and twisting sax. During the song “6 8” the audience are called upon to participate when Terry starts handing out shakers to the crowd who are encouraged to join in which adds to the whole upbeat nature of the set. The band finish with their version of Hendrix’s “Voodoo Chile” that is a rollicking rollercoaster of a ride that leaves me grinning from ear to ear. Everyone should sample the NJE live, the joy to be had is off the scale.