The announcement of a forthcoming LP by master guitarist Ry Cooder, his first since “Election Special” (2012) is nothing but good news. The video of the title track, “The Prodigal Son”, a re-vamped Gospel song, makes me think that spending some of my hard-earned on something I won’t get for 6 weeks is probably a smart move.

“Election Special” is a collection of modern protest songs continuing the liberal, populist themes of Cooder’s more recent releases. The best of them, “Brother is Gone”, concerning the deal with Satan made by the polluting, Tea Party sponsoring, Obama opposing Koch Brothers, would make it on to a compilation of his finest work & there’s a lot of competition for places on that. Ry’s 21st Century work has consisted of more of his own songs than before. That’s OK, he has made his socio-political commentaries with integrity & wit while continuing to enhance his reputation as one of the best guitarists on the planet. 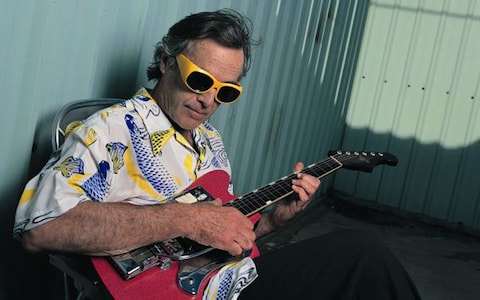 “The Prodigal Son” returns to a template that has served him very well in the past. His interpretations of Blues, Gospel & R&B tunes, some obscure, some not, have pointed us in the direction of some of the finest 20th Century American music. The title track came his way via the Henley Family Gospel Singers who have been spreading the good word since 1961. Ry has added lyrics which pay tribute to Ralph Mooney, the great pedal steel guitarist who was an essential part of the Bakersfield sound in Country music. He has injected the Blues into the song & though the live video with his new band has been repeatedly viewed,my jaw still drops every time. OK, before we get into the other songs Ry has resurrected for the album let’s hear “Shrinking Man”, the other original tune that Fantasy Records have kindly uploaded to the Y-tube.

Blind Alfred Reed has been a source of songs for Ry Cooder before. “How Can A Poor Man Stand Such Times & Live” was on his very first solo record back in 1970 & if you know Ry’s music you know “Always Lift Him Up & Never Knock Him Down”. The fiddle player performed in Virginia in the 1920’s & 30’s until the state banned street musicians in 1937 ! His songs were social commentaries, urging responsible behaviour in a lovely conversational tone. He’s a treasure. This time around Ry has included Alfred’s warning to rich Christians “You Must Unload”.

There are songs on the new record from the Gospel canon, one from the Carter Family & 2 by other blind musicians. Blind Roosevelt Graves is credited with inventing Rock & Roll in 1929…amazing! Blind Willie Johnson’s “Dark is the Night (Cold is the Ground)” has been described by Cooder as “the most transcendent piece in all American music”. It was included on that debut LP & again on the essential “Paris, Texas” soundtrack. He has arranged 2 of Blind Willie’s songs for this record & you know that they are going to be good. Ry has a musicologist’s respect for his selections but he still injects his own modern take into them Let’s hear the stirring original of “Everybody Ought to Treat a Stranger Right”, recorded with his wife Willie B Harris, in Atlanta, Georgia in 1930.

This year Ry Cooder is taking the show on the road in the US with his son Joachim on drums, multi-instrumentalist Robert Francis & saxophonist Sam Gendel who have all made their own records. It’s been sometime since I enjoyed the experience of seeing Ry play live & as he is now 71 there are not likely to be many more opportunities to do so. If any dates anywhere in Europe are added then I think that I really will have to dust off my bus pass & my passport.

4 responses to “Oh Yes! A New Record From Ry Cooder”