OK, it’s January 1969 & the Fifth Dimension, one of America’s most popular vocal groups are being driven in a vintage Renault down La Croisette in Cannes while singing “Sweet Blindness”, the second of the 5 Laura Nyro songs that they took into the charts. Could anything be more groovy ?

In 1966 the Mamas & the Papas were the cat’s pyjamas in American Pop, a permanent fixture on the charts. The 5th Dimension were signed to Soul City Records by Johnny Rivers, a big star in the US but almost unknown in the UK where we were busy with our Big Beat Boom. Rivers’ own records displayed a shrewd eye for the current changes in music & he nicked a hit for his new group with an almost note-for-note cover of the M&P’s “Go Where You Wanna Go”, the one before “California Dreamin'”, the one that almost got away. His first signing to his publishing company was a prolific teenage tunesmith called Jimmy Webb. There were 5 of Webb’s songs on the 5th Dimension’s debut LP (including the exquisite “Rosecrans Boulevard”), one of them was a world-wide smash which won 6 Grammys including Record & Song of the Year. The 5th Dimension were “Up, Up & Away” (ouch!). 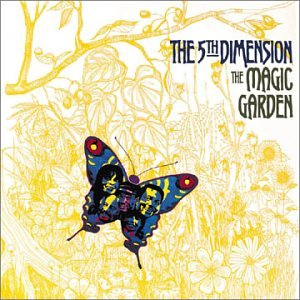 For their second LP the group were handed over to Jimmy Webb who wrote 11 of the 12 tracks & shared production duties with Bones Howe, a master engineer & a man who knew about Sunshine Pop (The Turtles, Association). The actor Richard Harris, who also made an LP with Webb at this time, once said (& I paraphrase here) that the young songwriter fell in love, wrote beautiful songs about it, had his heart broken & wrote more great ones about that. “The Magic Garden” (1967) is a concept album based on that relationship & it is one of the lesser celebrated delights of the Summer of Love. It didn’t repeat the debut’s success though the title track sure sounds like a hit to me & an inferior version of “The Worst That Could Happen” made the US Top 3. I loved the upbeat “Carpet Man” but we’ll go for “Paper Cup”, a single that missed the Top 30, because the group went to the trouble of dressing up in their Mod finery for this TV appearance.

5th Dimension were not just about the perfect harmonies, when Billy Davis Jr took the lead his dramatic husky vocals were the very thing. I guess it’s time to mention here that Marilyn & Florence were very striking, the group not only sounded great they looked good too. Spearheaded by the innovative writing talents of Webb & Bacharach & David Pop was moving away from Moon & June rhyming & the adolescent emotions of early 1960’s ballads. There were no rough edges to 5th Dimension”s music & “Easy Listening” was not yet a pejorative term.

For the 3rd LP Bones Howe took over sole production, there was only the one Webb track. The selection of 2 songs from “Eli & Thirteenth Confession”, the second LP by New York prodigy Laura Nyro, turned out to be a very good idea. Her soulful, confessional lyrics were often matched to quite offbeat, angular tunes. On “Stoned Soul Picnic” (1968), when they were given the 5th Dimension treatment, the title track & “Sweet Blindness” proved to be very popular. They helped the group become established as a big attraction & there was always at least one Laura Nyro song on their following 4 LPs.

I was not the biggest fan of the Hippie musical “Hair”. The brief nude scene ensured that it gained notoriety & plenty of media attention but as a budding member of the counterculture I couldn’t see how a Broadway/West End stage show could progress the cause of replacing a system dominated by greed for power & money by one based on Love (I was SO much older then!). 5th Dimension combined 2 of the show’s soundtrack, “Aquarius” & “Let the Sunshine In” as a medley & crushed it. A US #1 for 6 weeks, another Record of the Year Grammy. At the time it was ubiquitous & I found the “mystic crystal revelation” of “Aquarius” a bit much. Now, when Joe Osborn of the Wrecking Crew kicks in the bass line of the gospelly “…Sunshine”, all I want to do is boogaloo with Marilyn McCoo (that’s a dance!).

1969 was the year for 5th Dimension. Laura Nyro’s “Wedding Bell Blues” put them back at #1 in the charts. It was the first song to be released as a single to feature a solo group member (Marilyn) previously they had overlooked perfectly good hit records in favour of songs that featured group harmonies. There was a move to Bell Records where they continued to record with Bones Howe, continued to have hits & were regulars on American TV. I do feel that their TV appearances seemed more formal, more show business, the material more “adult oriented”. They could sing the telephone directory & sound good.  In 1975 Billy & Marilyn, now & still married left to make their own records. The later appearances on “Soul Train”, Bill Withers’ “Harlem”, Nyro’s “Black Patch”, were considered for inclusion here but I’m an absolute sucker for bright Sixties Sunshine Pop so it’s back to one of those great first 4 LPs they made. “California Soul” was written by Motown’s new hot couple Nickolas Ashford & Valerie Simpson, the third hit single from the “Aquarius” LP. Oh yeah, 1969, the sun is shining, 5th Dimension on the radio & everything is groovy