December 1966, I was just 14, you know what I mean. I’m not sure of the exact date, the TV music show “Ready Steady Go” had the tagline “the weekend starts here” but our regional company now aired it on a midweek evening at 6.30. R.S.G. had been cancelled, this was its penultimate episode & we often missed it because on the night of transmission 4 of us met up to play table tennis. It was a good night, a big room to ourselves, a few games, a lot of laughs & my Dad treated us all to pop & crisps. It was even more fun than that sounds.

Anyway, that night my friend & I held back until the last possible moment. It wasn’t because of Marc Bolan, not yet Tyrannosaurus Rex never mind T…. & his “Hippy Gumbo”, neither was it the Troggs, the Merseys or the Escorts who made us keep our friends waiting. It was the TV debut of the Jimi Hendrix Experience, a chance to see a new sensation who we had read about in the music weeklies, performing their debut single “Hey Joe” that delayed us. It was worth it &, for two music obsessed school boys, our world had shifted a little. 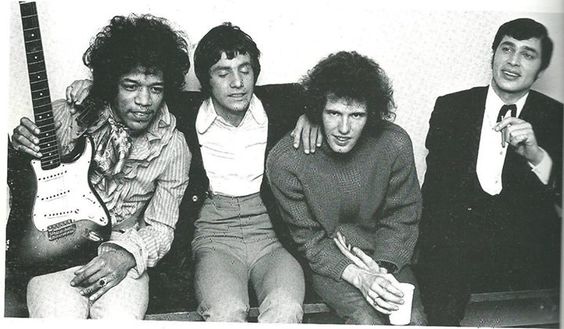 Jimi Hendrix changed quite a few people’s lives, fans & musicians alike. “Hey Joe” was not the big hit I remember it being, “Purple Haze” & “The Wind Cries Mary” were. My friends & I didn’t have large record collections but the 2 LPs released in 1967, “Are You Experienced” & “Axis: Bold As Love”, were requested for birthdays or Xmas & if Santa didn’t come through then somebody’s big brother or sister was sure to have a copy. Transplanted from the US to Swinging London Jimi flourished in the creative freedom he was given. He could write Pop songs like “Fire” & “Wait Until Tomorrow”, he could journey to the higher realms of the astral plane with “Third Stone From the Sun” & the title tracks of both albums. He was an explorer of uncharted territory for his instrument & for the recording studio, claiming possession of both. I don’t know much about chordal arpeggios and contrapuntal motion, with tremolo-picked partial chords but I know what I like. There may have been other guitarists with skills but no-one combined technique, imagination & personality like Jimi.

British music may have been leading the world in 1967 but the business of show had not really caught up. In April the Experience undertook a 25 date tour with the Walker Brothers, Cat Stevens & “special guest star” Engelbert Humperdinck. The most expensive seats were less than $1 & I’m sure you were guaranteed an interesting night. We never bought that “Wild Man of Pop” tabloid tag, it seemed more than a little racist. Anyone who knew anything about the Blues knew that Jimi followed in a tradition of Black American players who combined ability & showmanship. Later, in 1969, when Jimi derailed the live Saturday evening TV show “Happening For Lulu” it wasn’t shocking it was hilarious. In November/December he headlined another UK tour with the Move, Pink Floyd, Amen Corner & the Nice. $1.10 for that one…bargain! By then Jimi, after an incendiary performance at the Monterey Pop Festival (aided by a can of lighter fuel in his jacket), was being reclaimed by the USA. I think that could have been the plan all along.

“Electric Ladyland”, a double album, was released in October 1968 & in the Summer of 1970 we were still listening closely & still hearing new things. We were a little older now, different herbs to Dandelion & Burdock, still needing crisps. “All Along the Watchtower” was & still is a magnificent thing. I love a lesser known, obscure Dylan cover but this collision of two great talents has to be near the top of the all-time great records. 15 minutes of “Voodoo Chile” could take you to some very interesting places while you had to hold tight for “1983…(A Merman I Shall Be). My friend Polly was on that cover of the album & very nice she looks too. She never liked to talk about it but me…I know someone on the cover of “Electric Ladyland” !

In 1969 Hendrix was the highest paid musician in the world. He was the headline act at the Woodstock Festival but it overran so much that he appeared at 8 a,m, Monday morning before a tired, bedraggled & greatly reduced gathering. Just 2 years earlier his playing inspired positive thoughts about the possibilities of music & Life in the 1960’s. Here, having been awake himself for 3 days, he closed the greatest show on earth with an astonishing interpretation of “The Star Spangled Banner”, a sonic invocation of a nation fractured by war & violence. The film of “Woodstock” was seen by everyone, Hendrix fired a shot that was heard around the world. His performance has been called “probably the single greatest moment of the sixties”, I’m not sure about that but repetition & memory have neither blunted nor diminished the  power & (yeah) profundity of this startling piece of music.

There was constant touring, the chaos of superstar life at that time & LSD really was not a drug to be taken lightly or daily. Then, in September 1970 Jimi was gone, a great loss & a great shame. We were left with the “Cry of Love” LP, more evidence of his talent & range, the thoughtful, now poignant “Angel”, the furious “In From the Storm”. More perspicacious individuals than myself have had more things to say about Jimi Hendrix in books & movies. I do believe that had Jimi lived, extricated himself from management who insisted on a punishing schedule & allied himself with strong supporting players he would have continued to make music that pushed the boundaries of what the Rock guitar could achieve. There have been wonderful technical & individual guitarists since, all in some way influenced by Hendrix. When we lost Jimi he took his secrets with him & we lost something very special.