In 1958 Link Wray & his Ray Men hit big with their instrumental “Rumble“, an incendiary blast of amp-shredding distortion, feedback, vibrato & glissando, “the soundtrack to a knife fight” (Iggy Pop). Link’s guitar-as-a-deadly-weapon approach was influential & inspirational. Bob Dylan said “Rumble” was his favourite instrumental while, in the UK, teenage future guitar heroes Jimmy Page & Pete Townshend wanted to know if they could make this noise for themselves. Despite its Top 20 status Wray’s label Cadence would not release a follow up to “Rumble”, the record had been banned by some radio stations & owner Archie Bleyer wanted to distance himself from that moral panic of Juvenile Delinquency. Link moved to Epic where he continued to hit the spot while the label tried to steer him towards middle of the road guitar trudges through the hits of the day.

Swan Records, out of Philadelphia, had leased “She Loves You” from EMI in 1963. The record stiffed on release but sold a million when Beatlemania hit the USA the following year. While the label chased another hit they left Link Wray to himself, putting out whatever tracks he sent them. From the “Batman” theme to Dylan covers the Swan years produced some ferocious idiosyncratic music. The garage punk/blues racket of Willie Dixon’s “Hidden Charms” was only a B-side. The money ran out for Swan in 1967. Link, no longer current & considered a one hit wonder, had no label but did have a place to create & record his tunes. Link’s brother Ray had bought a 3 acre place in Accokeek Maryland. His “studio” setup was too loud for the basement so a former chicken coop became Wray’s Shack Three Track, a place where the band could kick back after gigging in the biker clubs of D.C. New tracks from the shack were released on the “Link Wray” LP in 1971 &, at first hearing, they seemed to be a long way from a Rock & Roll Rumble. 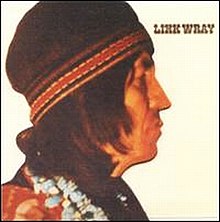 An Italian producer, Steve Verroca, took the tapes, over-sweetened the country ballads, was a little heavy on the gospel backing vocals & got the LP released on Polydor. The record is a tasty salmagundi of Link’s Southern Shawnee roots. There are some great songs &, while the guitar amp is not turned up to 11, the solos still sting. This may have been a change of direction but there is a keep it simple, Rock & Roll heartbeat which will get you in the end. The record’s range & maturity places it in some good contemporary company, Bobby Charles, JJ Cale, Leon Russell. When Link lets it fly there’s even a touch of Van Morrison’s “Astral Weeks”. “Falling Rain” has been covered by the Neville Brothers, “Fire & Brimstone by Nick Cave, “Juke Box  Mama” has a swampy groove that Creedence Clearwater Revival would have loved to have hit. There’s more, it’s a top record.

There was a lot of material coming out of the shack. Later in 1971 “Mordicai Jones”, with vocals by Bobby Howard, featured more terrific guitar work by Link. These 2 LPs made little impact at the time but the rawness & passion has meant that they have aged very well. Discover them & you’ll never bother with the Black Crowes again. Link & brother Ray relocated to Arizona & for the next record Polydor got him out to San Francisco in a proper studio with a producer, a heavy guest list & everything.

“Be What You Want To” (1972) is a little over-produced by Thomas Jefferson Kaye (soon to be involved with Gene Clark’s “No Other”, a masterpiece). Link felt sidelined by the use of session men including Jerry Garcia & Commander Cody’s band. Again the songs are strong & Link’s individual voice, he had lost a lung to tuberculosis, ties the whole thing together.    While in the Bay Area Link hooked up with John Cipollina, formerly of Quicksilver Messenger Service. He borrowed the rhythm section from Cipollina’s current band Copperhead & played gigs with John as a guest. The title track of “Be What…” has heart & soul, a live version has a bite that’s missing from the record. Similarly “You Walked By”, recorded with a straight Country backing, becomes an expansive, Classic Rock epic when played onstage. It’s a good record but maybe Link should have been given more time to see just how those songs could go before recording them.

So the shack days were over but Mr Verroca had “kept” a bagful of tapes which he brought to Virgin Records, a new British label with a pile of “Tubular Bells” money & a shortage of material to release. “Beans & Fatback” (1973) is the real basic deal. Some of the tracks are unfinished jams but what it lacks in polish is covered by a raw, passionate immediacy. I’m not sure how the blistering “I’m So Glad, I’m So Proud” had missed the cut on the previous LPs because it’s as good a thing as a thing can get ! There were plenty of musicians chasing this blend of Country rhythm & Blues roots. The 3 Wray brothers & their shack mates had the loose energy that the Stones wanted on “Exile on Main Street”.    I don’t think that Link had much to do with the release of this album, Virgin kept him sweet by recording an LP in the UK in 1975. Whatever the circumstances “Beans & Fatback” is a terrific LP to have around.

Link was busy for the rest of the 1970s. A hook up with rockabilly revivalist Robert Gordon produced 2 records & international tours. After meeting his 4th wife he moved to Denmark & was quiet for a decade. Inevitably his early recordings were compiled & re-released, using “Rumble” as the selling point, introducing a new audience to the wildest badass guitar music of its time. His deserved reputation is based on his instrumental ability. While die-hard Rock rebels may disagree, the music Link created when he got back to the shed at the bottom of the garden, his hippie years, endures as an outstanding example of a rock & roller going back to his roots, retaining the vigour & imagination that he started out with.The switchblade may have been put away but Link was never taking off his leather jacket.

One response to “Out In The Chicken Shack (Link Wray)”