The revolving door on the Byrds tour bus was spinning for quite a while after the departure of Gram Parsons in 1968. The group recruited Clarence White, a guitarist who had contributed to the 3 previous LPs. Clarence introduced his best buddy Gene Parsons who quickly replaced drummer Kevin Kelley. It was only weeks later that bass player Chris Hillman decided to join Gram in the Flying Burrito Brothers. This must have been a whack upside the head for Roger McGuinn. Hillman shared the wild ride from the folk clubs of Los Angeles to the top of the world’s charts & stepped up as a songwriter when the major talents of Gene Clark & David Crosby flew the coop. They lost their producer too, Gary Usher was fired by CBS for overspending on a Chad & Jeremy LP (ANY money would have been too much !). There were concerts booked, a recording commitment to the label. A new bass player, John York, joined in September 1968 & just a month later was in the studio contributing to the follow up to “Sweetheart of the Rodeo”. 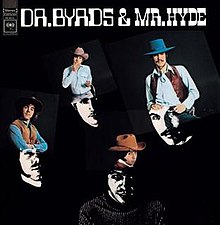 The title of the new record,”Dr Byrds & Mr Hyde” (1969), reflected the split-personality of the group, caught between psychedelic Rock & a Country place. It’s the only Byrds LP where McGuinn sings lead on all the tracks &, like “Sweetheart…” it opens with a Bob Dylan song. For all the personnel changes & the innovations of the last 3 near-perfect LPs the Byrds singing Dylan was where it all started, a touchstone of American popular music. “This Wheel’s on Fire”, written with the Band’s Rick Danko, gets an assertive Acid Rock treatment with outstanding guitar work. It’s not “Eight Miles High” but it’s about six.This clip, recorded before an audience of people who thought it acceptable to be in the same room as Hugh Hefner, shows that the new band could cut it as live performers too.

There are other good tracks on the record. “Drug Store Truck Drivin’ Man”, a leftover from Gram’s time with the Byrds, is a kiss off to the Nashville establishment’s snotty reaction to the group’s appearance at the Grand Ole Opry. The instrumental “Nashville West” & the country ballad “Your Gentle Way of Loving Me” were brought along by Gene Parsons & Clarence White. There are shades of “Notorious…” & of “Sweetheart”, it’s obviously a Byrds record  made by a new unit yet to establish their own personality on the sound. What is striking is the contribution of guitarist Clarence White. It would need a more technical person than myself to outline the advantages of his innovative Stringbender on his Telecaster but whether he was playing space-rock or a country hoedown Clarence was up to the job. “Dr Byrds…” was the lowest selling Byrds LP yet, just 7 months later there was another record in the stores.

The film “Easy Rider” was a big deal in the summer of 1969. Peter Fonda &  Dennis Hopper’s low budget ($360,000) hippie fable drew an untapped youth market to cinemas & grossed over $40 million in the US alone. The soundtrack LP, the music cost more to licence than the film, went gold within 6 months. A memorable scene in the film employed “I Wasn’t Born to Follow” from “Notorious Byrd Brothers”. Roger McGuinn was a friend of Fonda’s, he & David Crosby had dropped acid with Fonda & the Beatles in 1965. When Bob Dylan proved reluctant to allow his songs to be used McGuinn recorded “It’s Alright, Ma (I’m Only Bleeding)” then completed “The Ballad of Easy Rider” after Dylan handed him the first verse. The Byrds, generally perceived to have peaked before the Summer of Love, were responsible for 3 of the 10 tracks on the coolest soundtrack album around.

Ok so CBS were a little over the top with their “The movie gave you the facts, the Ballad interprets them” tagline.There’s an element of the cash-in as the title track was the only one to have any connection with the film. “The Ballad of Easy Rider” was re-recorded for the LP, speeded up & given a classy, clear as a mountain stream, orchestral backing by producer Terry Melcher, Doris Day’s son, who had performed the same duties for the group’s first 2 LPs in 1965. During the period of recording the LP the psychotic Manson “family” showed up at Melcher’s old house with murder on their mind. The 5 occupants were brutally killed. However freaked Melcher was by these extreme events he completed a fine job. The songs are mostly short & always sweet with a coherence that was missing from “Dr Byrds…”.

Roger McGuinn only wrote the one song for the record. He was busy with “Gene Tryp”, a rock adaptation of Ibsen’s “Peer Gynt” (those crazy 1960s eh ?). John York, contributed a song about his dog & Gene Parsons wrote “Gunga Din” about an incident when York & his mother were refused service at the Gramercy Park hotel in New York. What a lovely song it is too. Gene, a multi-instrumentalist, was proving to be an asset. He & White had played with the Gosdin Brothers in 1968 & “There Must Be Someone”, a country lament, came from that. He had also been in the studio when gospel group the Art Reynolds Singers recorded “Jesus is Just Alright” in 1966. The Byrds’ version sounded rocking on the radio when it was released as a single from the LP. All the covers were well chosen. There’s a Dylan song, “It’s All Over Now, Baby Blue, one from Woody Guthrie, “Deportee” & John York brought along “Tulsa County” from singer-songwriter Pamela Polland. Clarence White, playing whatever is put before him, is just perfect again. In the 1970s I briefly crossed paths with Gene Parsons & was able to thank him for the music, particularly “Gunga Din” which still sounds great. He took my fan-babble very well, a classy guy.

“The Ballad of Easy Rider” is a classy album too. I’ll not make the claim that it’s up there with the great trio of LPs, “Younger Than Yesterday”, “Notorious Byrd Brothers” & “Sweetheart of the Rodeo” but if you’ve spent enough time listening & love the Byrds then you might. Roger McGuinn was the only original member of the group, he was the keeper of the Byrds’ flame. If he wanted to continue as a unit rather than pursue a solo career then the 2 LPs of 1969 justifies his decision. As Peter Fonda wrote in the liner notes of “The Ballad…”, “whoever the Byrds are is just alright. OH YEAH!”. OH YEAH !