After recently losing Natalie Cole her death seemed to spark a deluge of other celebrity deaths for 2016. Rough start… To me it seemed that Natalie lived in her singing father’s shadow. Nat King Cole had begun his career in jazz in the 1940s and transitioned to pop when the popularity of jazz was waning. During this time it seemed everything was racially steeped, Nat Cole was labeled a turncoat, among other ‘choice’ references. He was actually attacked on stage in Alabama during a performance… wow. He still remained on top of his career, and died a legend. Natalie was the apple of her father’s eye. She was aware of all this, at a very young age, and I’m sure her heart broke for her daddy.

I won’t go into the astonishing amount of work Natalie did during her career. Astonishing—and in many arenas! You know it, you can look it all up… I’ve always had a tender spot for Natalie. She’s my celeb sorta twin, especially when I smile — we have a similar squint & that mega-cool tooth gap [which I’ll never close!] and I was also very close to my father. It almost seemed like she was on a mission to change the minds of those that fell out of graces with her father during his career, by carrying on his legacy. That’s a tough order. She chose solace in opiates, cocaine, alcohol, as early as her college years [that we know of]. It may have just been partying that took on a destructive path, but I see pain too. So much pain for one woman to shoulder, so much ‘medicating’… Did she already have a cushy start? Was her career already mapped out for her? What does that do to a person….? It broke my heart when I read about her Hep C condition. With the help of good PR, unquestionable talent & work ethic, a name, supportive friends & family, the best of medical care, she managed to swim ahead of the current, but last December, still with appearances scheduled, and work at hand—always working… it all came to an end. 65 years of a life. Congestive Heart Failure was the official word — yeah, a broken heart…

“I do believe that here [taps her head] is where everything happens. Rather than thinking, ‘Poor me,’ you turn it into something positive

[disclaimer: Zoë Washburne is a fictional character and is played by Gina Torres, currently alive in the 21st century, thank you]

For a brief, shining –or shall we say *shiny*– moment [see what I did there??] 🙂 a bit of audio/visual magic graced our airwaves… until evil descended upon the land and it was cancelled! Rupert Murdoch a pox on your house!!!! ::ahem:: I digress… this bit of magic was “Firefly”! From the brilliant mind of Joss Whedon, set in the future where at one point China had been a superpower for a few centuries, and Earth became overpopulated & replete with corruption, so with the advancement of space travel, we were able to set up new territories in other star systems. A ‘peacemaking’ faction emerged– the Alliance– but with that came oppressive regimentation, all with a sterile & austere vibe [think of the ‘absolute power corrupts absolutely’ theory] and a rebellion for freedom was born! we call them the Independents – or Browncoats. Zoë Washburne with her captain, Malcolm Reynolds, began their career together for this freedom with their fellow browncoats… until a battle in a place called ‘Serenity Valley’ when they were severely beaten– outgunned, outmanned, out-teched– and the Alliance took complete control. From then on a disenchanted Mal, Zoë, with her husband Hoban [we call him Wash] Mal’s pilot, along with the rest of the crew/passengers [nine in total] would be on the run in a rickety, but reasonably solid Firefly-class transport ship just trying to survive, sometimes caught up in devious schemes, sometimes rescuing those in need– usually via not so lawful methods [yeahhh… they were sorta crooks… but they were misunderstood sorta crooks!]

I LOVE a good sci-fi!! And I love the character of Zoë! not only is she a fierce ‘warrior woman’, as her loving husband Wash endeared to her once, her loyalty to and friendship with her captain is absolute & unwavering. Calm, cool, collected, nerves of steel, fear of NOTHING [well except Reavers, but everybody’s afraid of Reavers] an excellent shot… and the woman knows how to wear a fitted leather vest!

A quote was tricky to find because in most of Zoë’s scenes there was a dialogue going on so you’d need a set up… even for this one, because it results in a very funny scene with Mal, but it’s still good because it shows her head-space:

“First rule of battle, little one: don’t ever let them know where you are.”

One day I perusing one of those natural hair sites, looking for a good homemade leave-in conditioner recipe, and one of the articles was a photo spread focusing on black women in the Victorian era– corsets & gloves for days! and lots of great steampunk inspirational ideas filed away… then I came across this stunningly composed yet intense woman. No details on her at all, but I was captivated by her gaze! A horsewoman I suspected… dug around… all I found was this:

“Her name was Selika Lazevski and she was an écuyère who performed haute école – which means she was an equestrian who rode high school dressage in French circuses in the 19th century. She was photographed by Felix Nadar in 1891.” 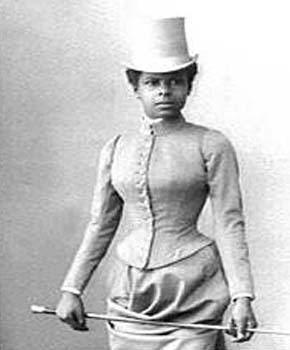 The intrigue builds! I don’t know if Selika was part Lazevski, married to a Lazevski, or was adopted by the Lazevskis, but this shot is a amazing… like anybody who got in her way to get to her horse would meet her riding crop with the quickness! I already have her story in my head, but I’m not saying a word now… [there might be a train involved & a winter ball full of controversy… and a blacksmith named Vlad] shhhhh…;) meh… knowing me tho, I’ll come up with 172 different outcomes, get overwhelmed, go get some lunch & forget allllll about it… poor Selika & Vlad… fragmented & stuck in my head forever!

Anyway, that’s it you guys, I still don’t know who this young lady was, but I love everything about her, especially those eyes filled with audacity!