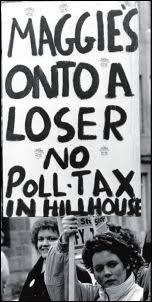 25 years ago today, the 31st of March 1990, our crew gathered at Dave & Isobel’s for Saturday breakfast. Isobel is French so there was decent coffee & tasty bread, maybe croissants. They lived in a 10th floor of a tower block on an estate overlooking Kennington Park in South London which that day was one of the rallying points for a march to Trafalgar Square to demonstrate opposition to the Conservative Thatcher government’s plans to introduce the Community Charge. This Poll Tax was a badly planned, ill- judged, unfair & politically motivated attempt to re-organise local government taxation & funding. The Labour controlled councils of urban Britain had become a thorn in Thatcher’s side. Her individualism (“there is no such thing as society”) & her vindictiveness meant that, like the trade unions, this “enemy from within” should be firmly put in their place.

From our elevated viewpoint we could see the streams of people entering the park. This was going to be a big one. Through the past decade we had rocked against Racism & Sexism, shown our solidarity with the miners, our opposition to nuclear weapons, apartheid & to the Falklands War. My friends, like thousands of others, we’re no “whatever it is, I’m against it” Rent-a-Mob. We are politically conscious, concerned that governments which act in our name should be aware of opinions beyond the halls of the Houses of Parliament. It was time to join the throng below & add our voices to an argument that needed to be had.

There is always a good humour to these marches. At one for the Campaign for Nuclear Disarmament I had missed my friends, hooked up with another straggler & followed the Gay Liberation Front whose “Reagan is the cowboy. We are the Indians” whoops became a rallying cry for our section. This day the sheer size of the turnout was exhilarating. We headed off for the city centre knowing that this would be noticed. It was a slow stroll up to the Elephant & Castle then to Lambeth Bridge. Crossing the Thames we could see the head of  the march at the Houses of Parliament, the crowd got more dense & more vocal, the police presence more visible. On Millbank sheer weight of numbers meant that we came to a standstill.

Our part of the crowd made it to Whitehall, to Downing Street where Maggie lived, the belly of the beast. The black gates had been erected the year before, access restricted since 1982. An anti-terrorism measure perhaps (in 1991 the IRA had to launch their mortars from Horse Guards Parade), an ” erosion of the Englishman’s right to wander at will in Downing Street”, a symbol of the State we were in. There were thousands of us outside the gates & we were going nowhere, there was no room anyway, the road up to Trafalgar Square was rammed. Up the front there was a hubbub & a fol-de-rol, it was expected. Fuck this government & fuck their gates. Anyhow, I had been on this march for 4 hours, we were never going to make the rally & I needed a beer. Four of us split, the others stayed. We knew the score & would all meet up later at the Lemon Tree in Covent Garden for a Saturday night in the West End.

On the Embankment the marchers were avoiding the crush & able to stretch their legs. We headed for the Lyceum on the Strand, a Sam Smith’s pub, a good pint & Mickey’s local from work. We left Downing St at 2.55 p.m. there’s a clock, Big Ben, just over there. When the entrails of the day’s events were examined it was just minutes later that a mounted section of the Metropolitan Police charged down Whitehall in an effort to clear the crowd. I doubt that horses or riders discriminated between anarchists (the few) & concerned members of the public (the vast majority). There was no way to avoid this provocation. The police wanted people to go home & people didn’t want to. A peaceful, well-mannered, very British protest march was about to become something else.

We were in the pub when we heard the first stories of it going off just down the road. Smoke rose from Trafalgar Square while 400 yards away we enjoyed our drinks & planned to rejoin the crowds when we had drunk enough. When that time came we were denied entry to the square by the police cordon around it. This was our city, these cops knew nothing. Mitchell’s girlfriend was working at the Cambridge Theatre on “Les Mis”, we had to get into there to get her out of there. We both knew that the narrow alley at the side of the Lumiere cinema on St Martin’s Lane was likely to remain unguarded. It was…result…we were back on the march which had now become a riot.

We were met by a line of riot-suited & booted police who impolitely told us we could go no further. I replied that the UK was not yet a police state & we, helped by others, waded into them. Not a chance against truncheons & shields but it had to be done. We had only been in the area for a couple of minutes & we had already lost track of each other. It was just me & Aussie Pete now, the other two were big boys they could look after themselves. Up the Charing Cross Road we found that the city had been taken over by the demonstrators. The burning & looting was going on elsewhere, here the police had lost control & the crowd were having some fun with them. A chant of “No Poll Tax” would start on one corner, the Keystone cops charged the chanters who would evaporate before another group took up the mantra just 30 yards away. Repeat until your sides hurt from laughing.

The threat of violence against police & property was around as was the sound of breaking glass, but this was more about walking the way you want to walk in the streets of the country where you live. The Thatcher government had increasingly used the police as a political agency. The sight of cops waving overtime-bloated wage slips at striking miners became a sickening symbol of the divisions of 1980s Britain. Today they were outnumbered & the city belonged to us, bricking a BMW showroom was extreme but it seemed important to be there…Power to the Correct People !

Back at the Lemon Tree there was a celebratory atmosphere as we swapped war stories. Around midnight we walked down Whitehall, deserted except for the police vans. We walked up to those damned gates, still there, but the cops stayed in their vehicles. Maybe they’d made their day’s quota, maybe they were too tired. The next day Mitchell & I joined the tourists & sightseers to check the damage & watch the clean up. Again we wanted to show out, to walk where we wanted to. This was a very British riot. like those in Brixton & Toxteth in 1981 & the disturbances across the country in 2011, normal service was resumed as soon as possible. We don’t really want to be full time street fighters but we do like to make the point that when lines are being crossed we are not to be fucked about or action will be taken.

Of course the breast-beating & the condemnation of violence & lawlessness followed. What could not be ignored was the massive unpopularity of the Poll Tax & the size of the demonstration against it. The Tory Party, worried by opinion polls, made plans to challenge Thatcher’s leadership. All 3 of her opponents were against the  tax & her successor, John Major, abandoned it in his first speech as Prime Minister (Though 2 of my friends still did jail time for non-payment). I know, it’s a pity that she was stabbed in the back by her own party, that we never did get to parade her severed head on a stick around the nation. That day 25 years ago did mark the beginning of her end & I am glad that I was part of that mass protest against her & her shitty ways.