Somewhere around here I have a dusty, krusty kassette recording of legendary DJ John Peel’s first broadcast for the BBC’s new music station Radio One in October 1967. It will not get played again, I should really file it in the rubbish bin. It’s a little bit of British musical history though innit ? That Summer I had tried to listen to Peel’s pirate radio show, “The Perfumed Garden” but it started at midnight, I was under the bed sheets & the rest of the house was asleep. “Top Gear” a magazine programme for the new music, aired on a Sunday afternoon. Hopefully I would stay awake for longer than 30 minutes.

The playlist for that first legal show (titled “Top Gear” !)  seems a little staid now because we have known the music for over 40 years. Swinging London is represented by Pink Floyd & psych-rockers Tomorrow, Haight-Ashbury supplies Jefferson Airplane, Country Joe & the Fish. However, in September 1967 there was a new LP from a new artist. “Safe As Milk” by Captain Beefheart & his Magic Band still dazzles, still thrills after all the passing time & John Peel’s radio show was the only place this young provincial teenager was going to get to hear it.

The kid I sat next to at school could play guitar just like ringing a bell (two-time BBC Radio 2 Folk Artist of the Year…that good). He was mastering that slide “bottleneck” style & we were sucking up all the downhome acoustic blues we could beg steal & borrow. We loved that good electric stuff from Chicago too. The jagged, acid logic of “Safe As Milk”, surging, strutting, psychedelic blues sounded like perfect sense as a distillation of  that great past & then a leap forward into some other-worldly, future music. The Merry Pranksters travelled on a bus going to “Further”. Captain Beefheart & the Magic Band, helped by guitar prodigy Ry Cooder, were already there, Blues Brothers from another planet.This clip, from January 1968, on the beach at Cannes is just…well, that’s how they did it…amazing yeah ? 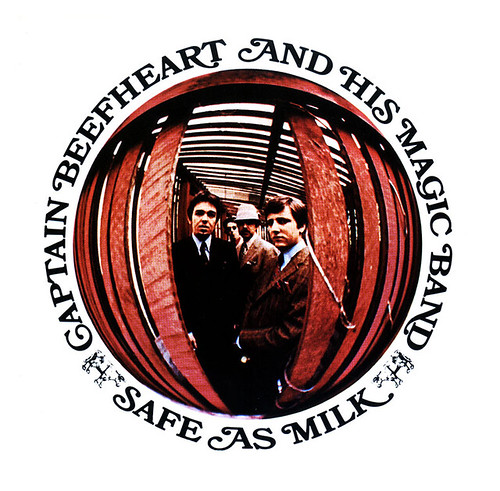 eel did his work well. People knew about this music & the subsequent records. In 1969 Pye Records released the debut on Marble Arch, their budget imprint with no rhyme or reason behind a schedule of the weird, the wonderful & the what the f… ! The labyrinthine licensing of the Captain’s US label meant another chance to buy “Safe As Milk”, this time for a bargain 99 pence, when Polydor inherited the rights. The record found a place in many young collectors’ small stack of vinyl & regular exposure to its zig-zag wanderings & abba zabba zooms generated a devoted fanbase, including myself, willing to follow this group along whatever yellow brick roads they chose.

Captain Beefheart (Don van Vliet) struck a rich vein of creativity & in 1968/9 was given free range by Frank Zappa’s new label Straight. The autocratic Captain holed the band up in Woodland Hills, Los Angeles for 8 months. Stories of his artistic & emotional domination are strange & legendary. When they were studio-ready they created “Trout Mask Replica”, a double LP, a magnum opus, which explored, expanded & experimented with the limits of rock & roll. The surreal poetry, awkward, scratchy rhythms & sheer strangeness of “Trout Mask…”, like the best modern Art, arouses strong, divided opinions. There are those who regard it as a highpoint of Western civilisation while others hear a willfully weird, noisy mess. Books have been written about its recording & its legacy. Critic Robert Christgau wrote, ” great played at high volume when you’re feeling shitty, because you’ll never feel as shitty as this record” (he liked it). “Trout Mask…” is no longer my favourite record by Captain Beefheart & his Magic Band but if you like the noises from the clips here then approach it with care & check it out. It really is an unusual, unique, fast & bulbous piece of work.

In 1973 the band  were with Warner Brothers & released “Clear Spot”, a monster of a record. The LP is co-produced by Ted Templeman, a man with an ear for a more commercial sound.  This Magic Band, Zoot Horn Rollo (Bill Harkleroad, guitar), Rockette Morton (Mark Boston, bass/guitar), Roy Estrada (bass) & Ed Marimba (Art Tripp, drums), were a natural force, relentless, rhythmic, hitting that long leaning note & making it float. A perfect foil to the vocalist’s stream of unconsciousness, tough on “Crazy Little Thing”, surprisingly, effectively tender on “Her Eyes Are A Blue Million Miles”, still crazy on “Big Eyed Beans From Venus”. “Clear Spot” is the most accessible of all Beefheart’s recordings &, for this reason, is probably his most popular. It still sounds great 40 year on. “Too Much Time” is surely the hit single that got away. There are verses, a chorus, even a soulful horn section. The Captain could play it straight, he preferred to take the road less travelled.

A packed hall at my university waited eagerly & patiently to see the hottest band around play a gig in support of “Clear Spot”.We waited some more before being told that the venue’s power supply couldn’t handle their PA & the gig was cancelled. As my friend Mitchell said about another disappointment, “it can’t be good for you to go from that happy to this pissed off in so quick a time !”. It would be a couple of years before Captain Beefheart & myself were in the same building again, this time one with adequate electrics. What a concert it was, convention subverted by trombonist Bruce Fowler replacing a bass guitarist, Tripp’s drum solo becoming a tap dance up & down the stairs behind the stage of the Birmingham Town Hall. At the centre of the ferocious, angular stomp the one & only Captain imposed himself on the evening, barking & growling out his poetry with a slightly crazed, definitely arch glint in his eyes. The appeal of this music is not its strangeness, not that it’s avant-garde. The rhythms may carom crazily but have a primal rock & roll/Blues heart, Don van Vliet is an artist, one of the best when at his best & his sense of humour is just as important. If you are guilty of taking him too seriously then you are guilty. What a concert it was.

Back in 1974 “Zigzag”, a UK music fanzine that acquired national distribution purely because of its damn good taste, asked its readers which LPs they played the most. This Top 10 includes 3 records by Captain Beefheart.

If you weren’t around at the time this is fine introduction to rock music from the late 1960s/early 1970s. There’s plenty to calm the turbulence of a daily blast of “Trout Mask…”  but if you really need to get your motor running then let a little Beefheart into your day.

2 responses to “Neither Far Out Nor In Deep (Captain Beefheart)”