At the beginning of 1968 the 2 remaining members of the Byrds, Roger McGuinn & Chris Hillman, hooked up with drummer Kevin Kelley for a tour of American colleges. This reduced line-up could handle a stripped down set of the folk rock hits but the subtle atmospherics of the new LP  “The Notorious Byrd Brothers” were beyond the trio. They went looking for a keyboard player & they found Gram Parsons, a young talent whose attempt to fuse country music with rock with the International Submarine Band had stalled after one unreleased LP. Gram’s association with the Byrds, proved to be short & bittersweet. It produced just one LP but “Sweetheart of the Rodeo” is undoubtedly a wonderful thing, in the modern vernacular, a “game-changer” for the group & for contemporary American music.

Roger McGuinn’s grand vision for the follow up to “Notorious…” was a double LP, a history of American popular music from bluegrass to electronic. GP brought his own ideas to the group & immediately stimulated the Byrds to pursue a new direction. He joined in February & in the first week of March the Byrds were recording on Music Row in Nashville where they made both kinds of music, country & western. Back in 1968 the audiences for rock & country were from different worlds in the same nation, a mutual fear & loathing separating  generations. Rock music was putting on a kaftan & protesting the war in Vietnam while country still proudly wore a red, white & blue collar. In Nashville the Byrds appeared at the Grand Ole Opry & the audience did not react well to this “longhair” intrusion on hallowed ground. In the summer of 1968 the cutting edge of American rock was the jagged lysergic take on the Blues from San Francisco. Within a month of each other the Grateful Dead released “Anthem of the Sun”, Big Brother & the Holding Co, “Cheap Thrills” & Jefferson Airplane, “Crown of Creation”. So here come those Byrds with some cowboy songs, yeah, that’ll work.

Side 1 Track 1, “You Ain’t Goin’ Nowhere”, a flying start featuring the pedal steel of Nashville cat Lloyd Green. Bob Dylan’s unrecorded songs, written during recuperation from a motorcycle accident, were circulated on a publisher’s demo & the Byrds, in at the beginning of this Dylan cover racket, were able to take their pick. “Sweetheart…” begins with this perfect statement of intent, a full-blooded modern blend of folk, rock & country. The LP takes a road trip along a country highway, stepping back to a Woody Guthrie hoedown, gospel from the late 1940s, stopping off at some lost (to a rock audience anyhow) classics before hitting 1968 with 2 of Gram’s songs & a cover of William Bell’s Stax hit “You Don’t Miss Your Water”. The final track, “Nothing Was Delivered”, another Dylan song, brings the record back to cutting-edge Byrds country.

McGuinn & Hillman had no songs to contribute to “Sweetheart…”. They had musical roots in folk & bluegrass but it was Parsons, younger, ambitious & committed to getting it right this time, who became the dominant figure in the recording sessions. He lobbied for pedal steel player JayDee Maness to be included in the live shows. The Byrds had been here before when David Crosby’s enthusiasm for his own talent had become too big for his poncho. This time the young tyro was not even a co-signee to the group’s new contract but a salaried employee. The 2 founder members went along with this because they knew they were on to a good thing but when producer Lee Hazelwood’s lawyers showed up claiming to have Gram under contract & threatening to sue they took rapid & drastic action. On 3 songs the freshman’s lead vocals were re-recorded by the seniors & the new versions rushed to the pressing plant. 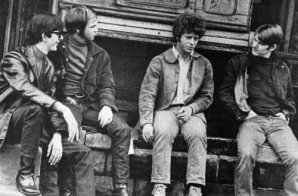 So the “Sweetheart of the Rodeo” that we heard had a lot more McGuinn than originally intended & Roger had again re-established his position as Big Byrd. The LP was now more of a Byrds record, country music through an LA cowboy filter, a full sound with crystal-clear harmonies. The sincerity & lack of irony retain Parsons’ cosmic American aspirations but this is till the follow-up to “Notorious Byrd Brothers”. Now there are re-mastered legacy editions, “Gram’s version” & you can take your choice. The original “Sweetheart…” is the record I grew up with, the one that I know & love.

The Byrds crossed the Atlantic for a European tour. In London a shared interest in  roots music & serious drugs led to Gram becoming close with Mick & Keith off of the Rolling Stones. The story goes that the Glimmer Twins persuaded Parsons that an imminent tour of segregated audiences in apartheid South Africa was really not cool & he left the Byrds just weeks before “Sweetheart…” was released. Perhaps more pertinent is a recording from the Piper Club in Rome. Gram steps forward to perform his songs while the majority of the set are those the audience know & love. This clip, accompanied by some great photos, shows the Byrds in fine form, the electric banjo of new recruit Doug Dillard is outstanding. The fledgling Byrd had travelled a long way to play rhythm guitar on “Mr Spaceman” &, I think, he knew that the poster was never going to read “Gram Parsons & the Byrds”.

I know, too much time spent on the convoluted story of the record when it should be, and is, all about the music. The Byrds did not invent country rock on “Sweetheart of the Rodeo”, my money is on the Everly Brothers but it could have been Hank Williams, country has always rocked. They were though, the first major act to bring this all this great music back home, to acknowledge a neglected tributary to contemporary music Before this record I had never heard Merle Haggard’s songs (“Life In Prison”), been aware of Cindy Walker’s songwriting talent (“Blue Canadian Rockies”) or of the wonder that is the Louvin Brothers (“The Christian Life”). In the following year Gram’s new group the Flying Burrito Brothers had released “The Gilded Palace of Sin”, Dylan’s “Nashville Skyline” came around, the Band were up on Cripple Creek & Johnny Cash’s “Live at Folsom Prison” LP was at the front of the stack. In 1968 the Byrds were still ahead of their time.