Well I was just 17, you know what I mean & on Sunday the 28th of June 1970 I saw, among others, Pink Floyd, Santana, the Mothers of Invention & Led Zeppelin all play live. The 2nd day of the Bath Festival of Blues & Progressive Music was long & memorable. Led Zep, arriving onstage as the sun went down, headlined an amazing line-up which brought over 200,000 out to play. The “Woodstock” movie had its UK release in May & we wanted our own “3 days of peace & music”. The crowd started to drift away as Sunday became Monday but real life could wait a little longer because I had come to see the mighty Jefferson Airplane.

In the “Summer of Love” 1967 I was neither going to San Francisco nor wearing flowers in my hair. The world’s media descended on Haight Ashbury in S.F. to pour scorn & ridicule on these Hippies but something was happening & a schoolboy in an English provincial no-horse town knew more about what it was than  the propagandists of the fourth estate. In 1967 music was a bush telegraph for the youth, semaphore signals across enemy lines. The USA had been in thrall to invading British groups for long enough. A new generation of musicians on the West Coast was taking it back & pushing it forward. In Los Angeles the Doors were lighting fires & Love was all you needed while up in San Francisco it was like Liverpool in 1962, everybody was in a band. With 2 US Top 10 hits Jefferson Airplane were the most visible of these Bay Area crazies. “Somebody To Love” & “White Rabbit” were instant classics & are still around, shorthand signifiers of a certain time & place in American culture, you know them both. So, don’t watch that…watch this.

There was work to do to catch what we could of this music, becoming expert at when & where on the dial a radio station was playing it, harassing the older guys for a weekend loan of “Surrealistic Pillow” & “After Bathing At Baxters”, LPs which went gold in the US while remaining part of the “underground” here in the UK. The singles were no longer big hits but, on the release of “Crown of Creation” in 1968, the group were on “The Ed Sullivan Show”, a pre-recorded insert. San Franciscan music was based on the extended jam & TV had just 3 minutes to fill not 15. Those damned hippies were not to be trusted on prime-time TV.

We never saw these moving pictures of the Airplane. We heard the strength of Grace Slick’s voice, saw the way she looked the camera straight in the lens & were a little smitten. There was more to the group than a beautiful lead singer, “…Baxter’s” & “Crown…” have a lysergic touch without the harsh buzz of acid-rock. The music is blues-based with more texture & variety than the British Blues bands. It is intelligently crafted (that seemed important in 1968) without the everything but the kitchen sink approach of many post-Sergeant Pepper’s “progressive” bands. Jack Casady played the bass as a lead instrument & Jorma Kaukonen was our new guitar hero.

By 1969 there was a little more spare chaynge around to add “Bless Its Pointed Little Head to our small collection. “Bless…”, a live LP, opens with the ending of the movie “King Kong”, “it wasn’t the airplanes. It was beauty that killed the Beast”, before drummer Spencer Dryden charges into “3/5ths of a Mile in 10 Seconds”, followed by the rolling thunder of Jack Casady’s bass, the twin vocal attack of Grace & Marty Balin then the razor-edged guitar solo of Jorma Kaukonen…powerful stuff. Rhythm guitarist Paul Kantner would get his turn later on an impressive album which captures the group when all 6 members were committed & contributing.

Hey now, just a week after Woodstock & Dick Cavett gets the uber-hippies on to his show. Dick & Joni sit & watch the Airplane play the anthemic “We Can Be Together” & “Volunteers”, the opening & closing tracks of their new LP. We were so ready for “Volunteers” when it was released in November 1969. The band had never sounded so confident, their big sound reinforced by Nicky Hopkins’ keyboard playing which improved so much good music. Lyrically Jefferson Airplane had always been direct but now there were confrontational counter-culture statements of intent & what straight society “Amerika” thought “doesn’t mean shit to a tree”. Singing “Up against the wall motherfucker” had headline shock value but this is more than saying naughty words in front of our parents. The youth revolution polemic is assertive & confrontational but it is also celebratory & deliberately provocative. “Envy thou not the oppressor & choose none of his ways” (Proverbs 3:31). Good advice from way, way back that rang true in 1969 & still does.

It’s been a long time since I thought that music could change the world & that revolution was just around the corner. The politics of “Volunteers” are utopian & naive but this lack of guile encouraged a peregrination of possibilities which intrigued my teenage self. Musically the record still represents a high point of the late-60s Californian blossoming. “Hey Fredrick”, “Eskimo Blue Day” & the eerie “Wooden Ships” are all epic, a classic blend of Airplane’s lyrical & musical swagger. The latter, written by Kantner, Stephen Stills & David Crosby (who can been seen helping out on the Cavett clip) outdoes the Crosby, Stills & Nash version on their own debut LP.

Back at the Bath & Wells Showground Led Zeppelin had squeezed their audience till the juice ran down their legs. It was what many of the massive crowd had come to see but it just wasn’t my bag, man. LZ were followed by Hot Tuna, Kaukonen & Casady’s side project. This was much more my thing. They were joined by all the other members of JA except for Grace & I made my way to the front of the stage to watch these guys work their electrifying blues jams. I didn’t know these songs but I loved this music. In the rain of early Monday morning a Fish-less Country Joe brought the spirit of Woodstock to Somerset, protesting the Vietnam War by getting us to loudly shout “Fuck !”. 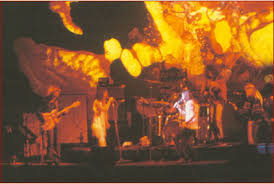 Swaddled in a damp sleeping bag I hit front of stage & was as close as possible to Grace Slick when the band began with “Volunteers”. Holy Moly ! Over the years I have seen many musical heroes but you never forget your first time yeah ? I was wide-eyed, didn’t want to miss any of this, the music, the lightshow, the people. The Airplane played 6 more tunes, older ones from the “Bless…” set before the rain got too heavy & its proximity to electricity too dangerous. I didn’t get to hear them play any more from the new record but what I had heard was enough. Anyway, I was hungry, dirty, smelly & really needed to sleep. We left the site in search of a car that we were pretty sure was out of petrol.

After “Volunteers”..well I’m running long on this so another time. I want to check for Neil & Butch who shared this first festival experience with me. I learned with them what a great time 3 days in a field could be. I learned too that maybe on the next times we should take a tent ! A shout to Mickey too, who I met the following year & with whom I spent many nights listening to the music of Jefferson Airplane/Starship. Good times, different times &, as he said to me just recently, “I wouldn’t have changed a thing”.

2 responses to “Fly Jefferson Airplane, Get You There On Time.”