Elvis joined the army. Buddy Holly & Eddie Cochran died young. Little Richard had no more songs & Jerry Lee married his (too) young cousin. The unruly rock and roll genie had been put back into the bottle pretty damn quickly. There were some great American records made between 1960 and the invention of the Beatles but the standard of pop music for white teenagers was at a low point. A pile of Italian-American pretty boys, the Bobbys, Frankies & Fabians made forgettable records about love in high school. Connie Francis, a 50s star, was revived. An awful, anodyne version of folk music almost caught on (almost, thank goodness). Singers spent years trying to invent a new dance craze. If one of them stuck then two years of the same song with a slightly altered title seemed to be the routine.

A beacon of light & invention at this time were the girl groups. They were around in the 50s but the work of Phil Spector with the Crystals & the Ronettes set a new standard. Over in New York the Shirelles hit big with “Will You Love Me Tomorrow”, a Carole King song. The sound survived the “British Invasion” & then was taken to a new level at Motown.All those young Detroit girls had grown up wanting to be the Crystals. Never wanting to be obvious here are 3 great girl group songs, none of them by Spector.

From 1965, the Royalettes with their superb version of “Gonna Take A Miracle”. A record that could only have come from New York. All the elements of the classic girl group sound are there, in the right amounts & in the right places. Phil Spector would have used 6 drum kits & 5 pianos to emphasise his abilities as a producer but would not have made a record as good as Teddy Randazzo did. Randazzo, a failed vocalist/accordionist (never a good combo), wrote some classics in his time. Here he creates the sweetest of soul songs using all the strings in his orchestra. It was a minor hit for the Royalettes (adding “ettes” to a name was very popular) & they never had another despite the obvious attraction of the voice of Sheila Ross.

In 1971 a young New Yorker Laura Nyro had recorded two distinctive LPs of her own songs. They were often of an idiosyncratic structure but when squeezed into a pop format provided hits a plenty. For her next LP she hooked up with Labelle (formerly Patti Labelle & the Bluebells). They recorded a tribute to girl groups, including those from Motown. It was the music she had grown up listening to & loving as a teenager. She chose this song “Gonna Take a Miracle2 as the title track  of a fine record.

How much do I love the Shangri- Las ? The “Myrmidons of Melodrama” as they were tagged in a collection of their work. It’s April 1965, we can all see & hear why Shindig! picked this as their record of the week. with producer George “Shadow” Morton the group sang of “alienation, loneliness, abandonment and death” (Wikipedia). To quote Ed Sanders of the Fugs…”Oo-Ee-Oo”. Their teen symphonies were just so different from the usual girl group fare. The girls were different too.

If you were an older teenager in 1965 the Ronettes must have seemed very attractive & kinda tough. The Shangri- Las were white with a tough girl image. Mary Weiss, the lead singer, was just 16 years old when she sang of bad boys and loss and leaving home. There are men of a certain age who fell in love with Mary at this time and have never had a reason to change their mind. In their leathers, with their cool delivery they seemed like the real thing & not “Laverne & Shirley” (ask your dad.). When Mary was accused of carrying a firearm across state lines she did not deny the charge but explained that she had been threatened so had bought a pistol…she was 17…what a girl.

Sometimes there were 4 in the group, mostly they were a trio. Mary’s sister Betty seems to have appeared when she felt like it. I prefer to imagine  the 4th member is David Johansen of the New York Dolls sliding on to join them. He so wanted to be a Shangri-La. 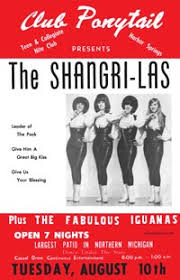 This poster is for a gig by the girls. The support band, the Fabulous Iguanas, have a drummer called Jimmy Osterberg who became Iggy Pop. My friend & I are building a time machine. Our maiden voyage will be to see Funkadelic play in 1971. Then we are going to this.

The Exciters had a unique gimmick for a girl group. They had a man in the line-up. Herb Rooney was married to the singer, Brenda Reid. From the energy & power in Brenda’s voice she was, perhaps, a woman who got her way. In the UK the group’s best songs were nicked by local artists who sold more records. “Tell Him” was a US hit and the French had “un amour fou” for them. I grew up knowing the Manfred Mann mega-hit “Do Wah Diddy Diddy”. I was 30 years old before I heard the original by the Exciters and realised that the original just crushed the attempt by those English boys. I loved the group and have not been disappointed as I have heard their other work.